By Matt on December 5, 2017 in Flashlights, Guns, Preparedness, Reviews, Survival

If you were to enter the search terms “lever action light mount” into a search engine, you would find several forum discussions full of jerry-rigged contraptions, comments like “I don’t even know why you would want to mount a light on a lever action”, and various mounts that were too large for their intended purpose. That is why this review of the Hill People Gear Lever Light Mount will be just as much a justification of why something like this should exist as it is a review of the product on its own merits. 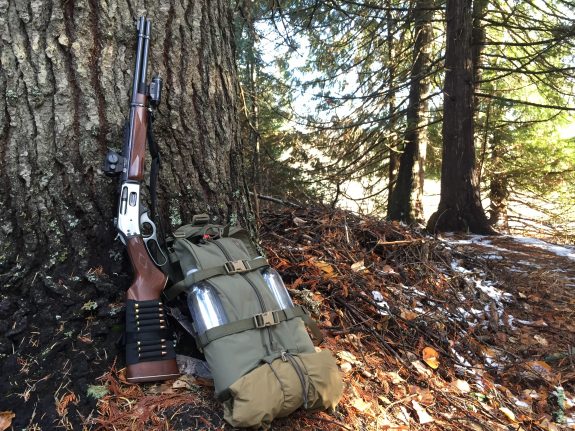 The Hill People Gear (HPG) Lever Light Mount is a 3-slot picatinny rail that clamps onto the magazine tube of .30 caliber lever action rifles. It is designed to be very compact and lightweight (1.24 ounces) so that it has as little effect as possible on the attributes that make lever action rifles so suitable for backcountry use.

The Lever Light Mount consists of two hard anodized, 6016 T6 Aluminum aluminum halves and two screws. One half of the mount has the 4 bar, 3 slot picatinny rail with a machined groove running from front to back on its underside. The other half has a raised ridge that mates with the groove in the first half to create a hinge point. Both halves have opposing curved clamping surfaces that grip the sides of the magazine tube. The screws pass through both halves, drawing them together and hinging the clamping surfaces closed to grip the magazine tube tightly. 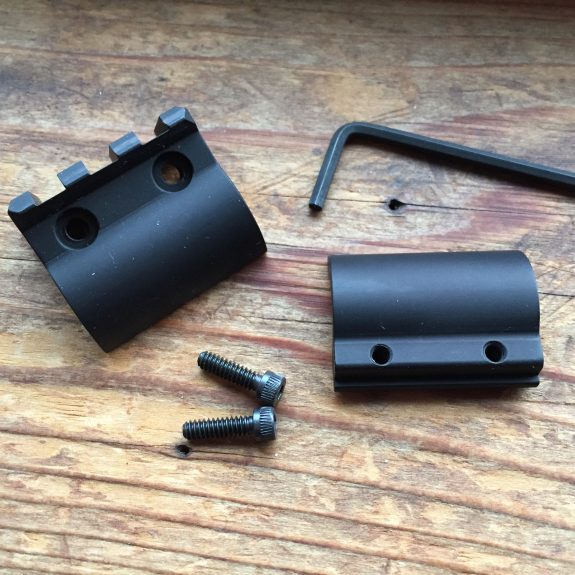 Why the Lever Light Mount Exists

The practicality of firearm mounted lights is widely accepted for the purposes of home defense but I rarely see the concept discussed for backcountry use. This is a real shame because they have such obvious utility for the woodsman.

It gets truly, truly dark when you venture out into the backcountry and not just at night. If you are under a stand of Western Red Cedar (or another dense canopy tree), you may have travel limiting darkness an hour or more before sunset. If that same dense stand of timber is shaded by a mountain, you may not be able to see your hand in front of your face long before the official sunset time. The same could be said for tight valleys, slot canyons, the hills and hollows of places like Kentucky or Southern Indiana, during lousy weather, and other common situations for the backcountry traveler.

I live, work, play in an area that is one of eastern most parts of the Pacific Time Zone and you can’t go much further north without crossing a border. That means it gets dark early. The area is characterized by defined mountain ranges with wide valleys and tons of timber. That means it gets dark in some places even earlier! There are areas on our property this time of year that require a flashlight to move through before 3PM (and that will move earlier as we get closer to the winter solstice). I could probably show you moose or bear sign in at least a few of those same spots right now.

Be Sure of Your Target and What is Beyond It

That is the fourth of Cooper’s gun safety rules. It holds true whether you are target shooting, defending a suburban home, or cruising the backcountry. Your obligation to identify your target before you start shooting doesn’t end once you are off city streets.

The use of a firearm mounted white light is one of the most practical ways to accomplish the positive identification of a target. A .30 caliber lever action rifle is one of the most practical firearms for the backcountry travel with its combination of compact size, lightweight, quick follow up shots of a sufficiently powerful cartridge, and affordability. So it stands to reason that a lever action rifle with a light mounted on it would be very practical.

Beyond the safety argument, there are practical reasons to have a really, really bright light on your backcountry rifle. Even the largest ghost ring rear sight or best optics money can buy will fall short in true dark. You will not be able to find your front sight or reticle unless you can silhouette it against a brightly illuminated target. Why even carry a rifle if it won’t accommodate the lighting conditions you are likely to encounter? 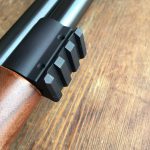 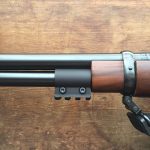 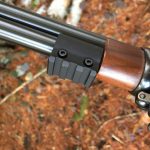 The Lever Light Mount is very compact. That really sets it apart from the other lever action light mounting solutions out there. You barely notice it when it is tucked up against your rifle’s hand guards. That is nice in states like Idaho where you will have to remove your light when you are hunting in order to comply with hunting laws.

Installing the Lever Light Mount is easy. You can figure it out by looking at it though Hill People Gear does wisely caution against over tightening since you could compress the walls of the magazine tube and cause feeding issue with your rifle. I used thread locking compound because, if it has screws… I use thread locker. I think it is especially important in situations like there where you can’t necessarily turn the screws until they bottom out.

The mount didn’t move or break through 100 rounds of ammo through my Marlin 336. That isn’t exactly a torture test but it satisfied me (and I am just about out of .30-30 ammo). Those rounds weren’t on the range either. The rifle was shot in field conditions and I learned a lot from it, like why Hill People Gear decided to place the light where they did…

Switching it generally very intuitive with the light mounted at the 6 o’clock position in front of the hand guard. I found that I could easily use the index finger of the support hand to active both momentary and constant on with both of the pistol lights I used.

The 3 slot rail is completely sufficient for mounting any light I would want to put on my lever action rifle. I tried the Lever Light Mount with two types of pistol lights: Surefire X Series Lights like the X300 and Streamlight TLR Series Lights like the TLR-1 HL. Both worked well but I found the switch on the Streamlights to be a little easier to use in the 6 o’clock position. It is also more than enough rail for use with a flashlight ring or lights that use the Surefire Scout pattern rail mount. The rail is small enough to not be overly large for lights with smaller footprints and large enough to fully support the rails on pistol lights. 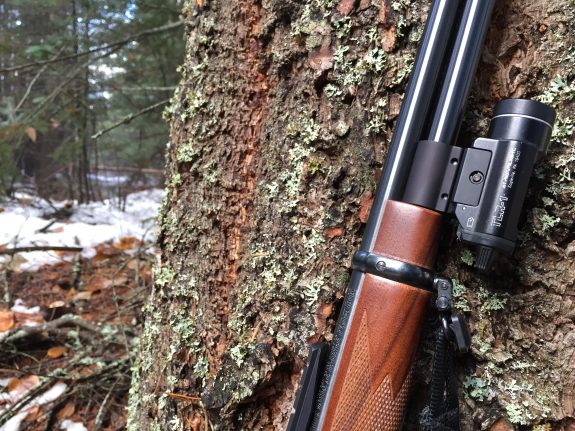 I am familiar with many of the current light mounting solutions for lever action rifles and I think the Lever Light Mount stands out among them for a number of reasons the chief of which is its compact size. Lever action rifles are great for backcountry use because they are slim, slick, lightweight, and compact. You don’t want a large heavy light mount to screw that up.

You can check out the Lever Light Mount at HillPeopleGear.com. It is on sale as of the time of this writing.

Disclosure: Hill People Gear sent me the Lever Light Mount, free of charge, for this review.