As the KeyMod vs. M-LOK debate continues, it is easy to forget about good old Picatinny rails. Gunstruction mined the data from their virtual AR-15 building tools to see what attachment system their users preferred over the last month and the results are a bit surprising. It is basically a dead heat with M-LOK, KeyMod, and good ol’ 1913 rails each being used in about a quarter of the builds. The remaining quarter was taken up by rails with no attachment method or an alternate method. 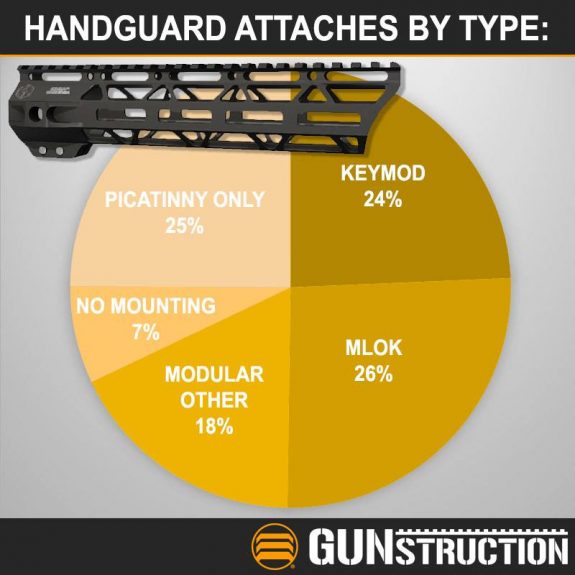 KeyMod versus M-LOK has largely been hashed out from the end user opinion and engineering perspective yet both systems still have their proponents. Both systems seem to have their share of high profile manufacturing backers which equates to staying power. End user opinions, engineering, and support are one thing but none of those take into count the actual numbers that will likely decide this debate – sales. 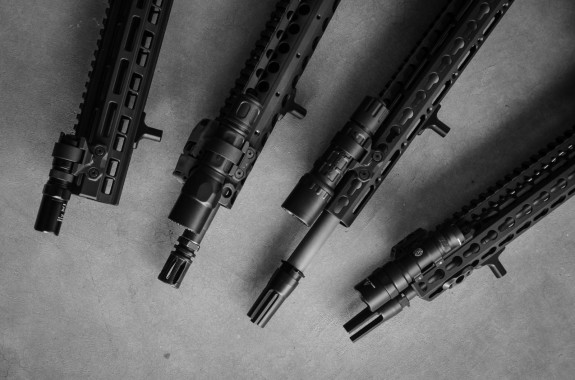 Arisaka Light Mounts and Finger Stops on both attachment systems

Arson Machine reported that their end users order M-LOK over KeyMod at a rate of about 3 or 4 to 1. However, dealer orders are typically more like 1 to 1 in the interest of offering a wide selection to their customers.

Parallax Tactical also makes hand guard for both systems and they report they sell M-LOK over KeyMod at a rate of 2.5 to 1. They also added that they prefer M-LOK from a manufacturing standpoint. 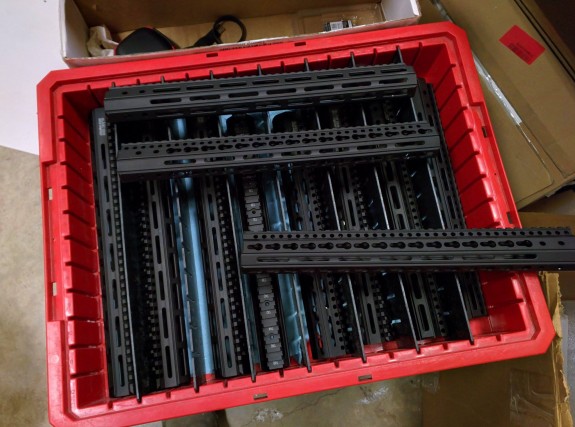 Parallax Tactical offers a full line of hand guards with both KeyMod and M-LOK option for retail and OEM.

I heard from several others manufacturers who had more anecdotal information (all pointed to M-LOK as the better seller) or that didn’t really want to share their numbers. It was interesting that two small retailers that I spoke to shared the sentiment that they tended to order heavy (or exclusively) M-LOK because they have limited cash for inventory and that is what sold better for them.

This certainly won’t end the debate and it shouldn’t because sales numbers don’t mean that one is truly better than the other. There are other factors that can drive sales like ease of manufacturing (and cost), marketing, and more. Sales numbers alone can’t tell the whole story but they can obviously play a huge role in manufacturers and retailers deciding which system to continue supporting. While M-LOK is clearly outselling KeyMod among those who were willing to share, none of the manufacturers indicated that they intended to discontinue sales of one system or the other any time soon.

What about you? Do you have a preference? Hit the comments below.

We covered the TangoDown KeyMod Stubby Vertical Grip back when it was still an early prototype. I am happy to report that it is extremely close to entering production now along with KeyMod rail covers and a hand stop. 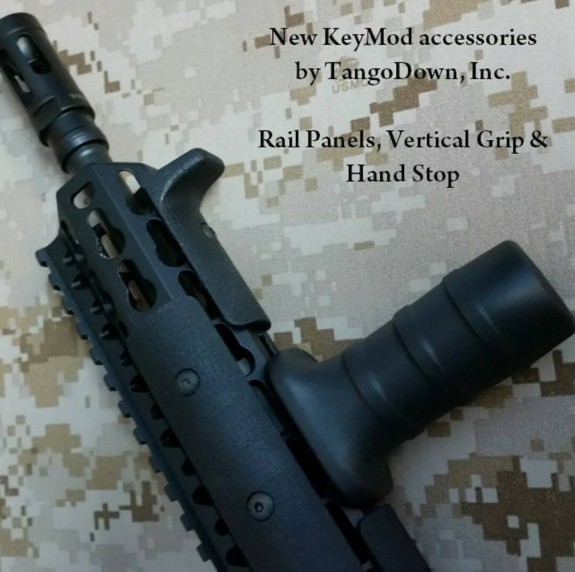 The new hand stop and rail covers have two things that should really set them apart. The first is that they use metal KeyMod hardware to mount. This is heavier than many of the all plastic rail covers but has proven to be stay in place better in my experience. The second is that these items will feature a similar texture to what Tango Down uses on their SCAR panels. This texture is very grippy without being too abrasive.

It looks like TangoDown is getting into KeyMod in a big way.

Arisaka’s Finger Rest is a bit different than most hand stops. It is smaller and more rounded, like the world’s tiniest vertical grip, so that it can slip between the shooter’s index and middle fingers, a technique that I use on occasion with a standard hand stop when my shooting position dictates it. This design allows the shooter to place the Finger Stop further forward on the rail which can provide additional space should you need to move your hand back on the rail as you would in a kneeling position. 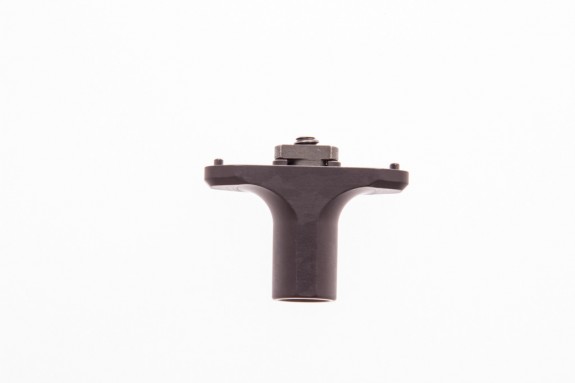 The Finger stop is available for the Centurion Arms CMR, KeyMod, and M-LOK. I believe it takes real work and ingenuity to reduce something to its simplest form. I am not sure I have ever seen a more minimalist and simple weapon control device than the Arisaka Finger Stop.

The new Aimpoint Micro Mount looks a lot like their previous Aimppoint Micro Mount at first glance. However, this new version is set at absolute co-witness height and can achieve lower 1/3rd co-witness via a very cool magnesium alloy spacer. Like its predecessor, it is very lightweight at just 1.5 ounces (or 1.8 with the spacer).

Our first look at the SLiM Rails (Slim, Lightweight, Modular) came with the release of the DDM4v11. Now they are available for purchase separately. These rails offer KeyMod attachment points at 3, 6, and 9 o’clock, continuous 1913 rail at the 12 o’ clock position, integrated QD sling swivel sockets, and the good news for Lite Rail users is that it will work with the Light Rail III barrel nut so swapping should be a snap.