Impact Weapons Components will release their SCAR QD Rotation Limited Sling Mounts soon. These mounts are designed to turn the standard SCAR sling attachment points into far more useable QD sling swivel sockets. These will be machined from steel and Melonite treated for durability and corrosion resistance. The same part will work for both the front and rear attachment point.

I will let you know when these are available. Check out ImpactWeaponsComponents.com and use the coupon code “triggerjerk” for a discount on your order!

The images shown below are incomplete prototypes. 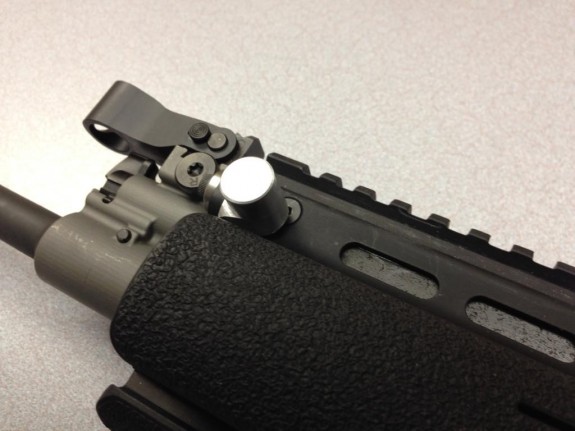 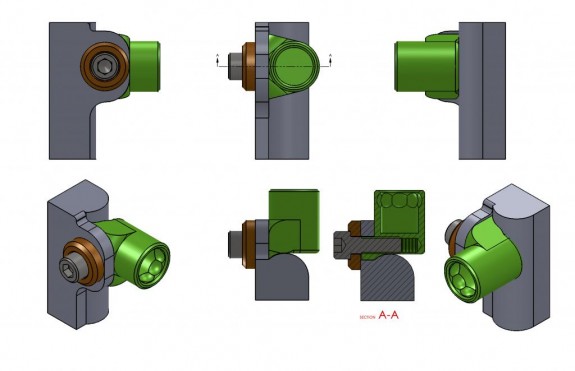 By Matt on November 1, 2012 in Flashlights, Guns, Reviews, Tactical Gear

The collaboration of Haley Strategic Partners (HSP) with Impact Weapons Components (IWC) has produced a string of a light mounts that are so well conceived that they leave you wondering how you got along without them. Well, here comes another – the THORNTAIL Offset Adaptive Light Mount.

The THORNTAIL Offset works on the SCAR 17 like it was made for it.

The 45 degree offset allows you to utilize lights like the INFORCE WML and Surefire X300 on an FN SCAR without being blocked by the front sight.

The THORNTAIL Offset is, in the simplest terms, a short section of 1913 rail that is offset at a 45 degree angle to the rail that it is mounted on but there is more going on here than just that. This offset rail does more than any other that I have seen.

This mount is designed to be used with weapon mounted lights like the INFORCE WML, Surefire X300, Streamlight TLR-1, and similar lights. It allows the user to place these lights in a more intuitive and easy to activate location than just being placed on the 3 or 9 o’clock rail.

Or, it can be mounted back (or anywhere in between) to act as a simple offset mount.

Like all IWC products, the THORNTAIL Offset is machined from 6061-T6 aluminum and hard anodized for a durable, matte black finish. It weighs only .8 oz!

I tried the THORNTAIL Offset on a variety of different weapons and with a variety of different lights. I tried an AK with Ultimak rail, various different locations on a AR railed hand guards, and an FN SCAR 17. I was able to test the following lights: INFORCE WML, Surefire X300, Streamlight TLR1, and Insight WX-150. I learned a lot about what weapons this rail is well suited for and which lights work best.

Regarding the lights, they all worked well except the Insight WX-150. The WX-150 has a split rocker switch that means that when the light is flipped upside down on the THORNTAIL Offset, both sides of the switch are constant on only when pressing down on the rocker. Down is the most intuitive way to press the switch so this makes momentary use difficult.  This is less than ideal. The Streamlight TLR would be well suited for a right-handed user but less ideal, though still workable, for a left handed user. The WML and X300 has switching arrangements that I ideally suited to this use.

The THORNTAIL Offset is magic on a SCAR or AR-15 but it is not suited to use on an AK with an Ultimak rail. It places the light in a position that crowds the sight picture too much. Ultimak users, this one is not for you.

SCAR users take note. If you want to use an INFORCE WML, Surefire X300, or similar light on your SCAR, you want this mount. You can place the THORNTAIL Offset on the top rail, butted right up to the front sight, and it will place the light perfectly for intuitive use. This position tucks the bezel of the light right up next to the front sight (when deployed) so that there is virtually no shadowing caused by the sight and the sight can be still be folded. The light placement is so nice in terms of its relationship to the front sight post and ergonomics, that it is as if the mount was made for the SCAR. It should be noted that I tried it on a SCAR 17 but I suspect it will work just as well on a SCAR 16.

The THORNTAIL Offset tucked every light we tried (including this INFORCE WML) close to the front sight on the SCAR 17. The fit was ideal.

Talk about a perfect fit! The front sight could still be folded with the light in this position.

The THORNTAIL Offset is also right at home on the railed hand guard of an AR. I tested it on the top rail and side rails where it is especially well suited. Lights like the WML and X300 can be mounted in the 12 o’clock position, directly on the top rail but some users prefer to have the light in a position that is closer to 10 or 11 o’clock which is essentially what the THORNTAIL Offset does. It works especially well on a side rail. It can be difficult to get your thumb down onto the switch of a light that is mounted on the side rail. The THORNTAIL Offset raises and angles the light so the switch falls perfectly under thumb. If you are using a WML, X300, or similar light on a side rail, this mount is a big improvement.

My sample of the THORNTAIL Offset has very sharp corners. It was a non-issue when a light was mounted on it since the light effectively shields the corners. I brought this up with IWC and they informed me that they were already aware of this and that the next product version would have chamfered corners.

I also noticed that, because of the unique way that the two parts of the mount bolt together, it can be a bit of a pain to get the screws started when the mount is not on a rail. Thankfully, the THORNTAIL Offset will come off the rail without the two sections completely detached. If you do have to detach the two parts, the screws can be started easily if you place both pieces on the rail and pinch them into position.

The THORNTAIL Offset works extremely well on the side rail of an AR-15 railed hand guard like this Daniel Defense 12.0 FSPM.

The THORNTAIL Offset offers a nice ergonomic improvement for those who use lights like the WML, X300, TLR-1 and similar lights on long guns. SCAR owners will really appreciate how it places the light so perfectly. It is light weight, low profile, and cleverly designed to offer a ton of mounting options.

The THORNTAIL Offset is available from Haley Strategic Partners and Impact Weapons Components. Remember to use the discount code “triggerjerk” for 5% off at ImpactWeaponsComponents.com.

AIM Surplus recently introduced the long awaited extension rail from Branham Tactical. It adds 2″ inches of rail space to the two side rails and the bottom rail. This extension rail will give users more light mounting options and help out those user who like to run their support hand closer to the muzzle. This rail is a much needed upgrade for the excellent SCAR series of rifles.