This review is going to be a little different than most. I will spend just almost as much time talking about other optics as I will the Trijicon TA33 ACOG which is the subject of the review but please bear with me. I have a point… I think.

The holy grail of carbine optics is an optic that provides red dot sight (RDS) like speed and performance coupled with the ability to ID targets and shoot effectively through most or all of the useful range of the 5.56 cartridge. As with anything we hang on our carbines, the grail optic should also be as compact and lightweight as possible. Most shooters immediately think of low power, variable magnification optics like a 1-4X style scope largely because of the ability to dial the magnification down to 1X which they assume will offer the most RDS-like experience.

I think they may be barking up the wrong tree or at least missing some of what makes an RDS great. The most RDS-like magnified optic is not a variable power optic at all. It is a compact, lightweight, fixed 3X magnification scope called the TA33 ACOG from Trijicon. It might not be the grail optic but it is a real gem.

There is More to an RDS Than Just 1X

I have written before about how the reason the RDS is the default optic for fighting guns is not just that it is 1X. It has just as much to do with the fact that the RDS has long eye relief (basically infinite) and the most forgiving eye box possible. This is what makes it forgiving of the awkward positions and the less than ideal shooting situations that come with defensive shooting. This point is largely missed or ignored by novice shooters.

That is not to say that you can’t be fast with a 1-4X (or 1-6X/1-8X). You certainly can, especially if you choose your 1-4X optic wisely and practice. When you are standing or walking through a course of fire, you likely won’t see much difference at all in your times between a 1-4X and an RDS. However, when you add in some awkward shooting positions, a full on tactical tuxedo (plate carrier, chest rig, etc), and barrier shooting you can start to see the RDS rise to the top. This is due to how forgiving the RDS is of the inconsistent eye placement that comes along with this type of dynamic (forgive me for using that tactical buzzword) shooting.

When you are standing, it is easy to drop your eye into more or less the same position every time behind an optic. Now go to prone. You will likely find that you are now closer to your optic. The same goes for barrier kneeling. Go to some form of roll-over prone or supine position. Your eye is now probably offset to the optic slightly (or at least you are straining to get it centered) and it is probably either closer or further depending on the position. None of this matters with an RDS but with a magnified optic, you have eye box considerations to deal with. It takes time to hunt for that sweet spot to place your eye behind your optic. That is time that would be better spent shooting if you optic allows it. 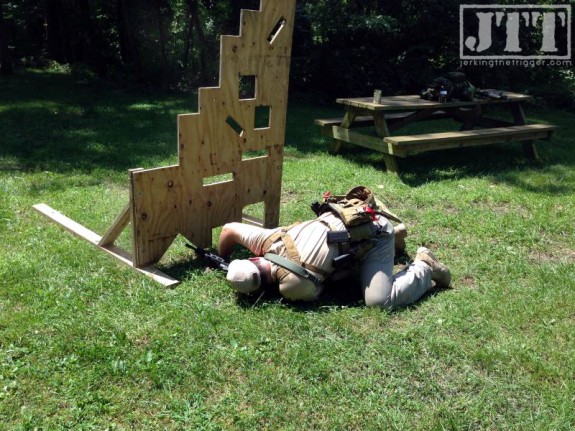 If your shooting involves awkward positions like this, you will be thankful for the forgiving eye relief and eye box. Photo credit: Eric H

The TA33 may lack 1X capability but it makes up for it with a variety of eye catching reticles along with the most forgiving eye box and eye relief of any magnified optic I have ever tried. It also happens to be extremely lightweight, compact, and durable like an RDS. It even has a few other little tricks up its sleeve that further cement it as the most RDS-like magnified optic available.

The eye relief on the TA33 is absolutely amazing. It is useable from as close as roughly 1″ to as far as 7”. That sort of eye relief is utterly amazing and while it isn’t the infinite eye relief of an RDS, it is might as well be for the way a carbine is used. If you can get your cheek on the stock, you can probably get a sight picture. This forgiving eye relief means that whether you are nose-to-charging-handle or shooting from your back, you won’t have to spend time hunting for the proper eye relief.

The eye box is equally amazing. There is a massive area behind the TA33 that will still allow a full sight picture through the optic. Even when you are so offset that the view through the optic is partially or even fully blacked out, the eye catching reticle is still visible and will allow you to get a hit at shorter distances. Let that sink in a bit. Even when the view through the TA33 is obscured because your eye placement isn’t perfect, you may still be able to see the reticle and get a hit.

We have established that the TA33 is forgiving in terms of eye relief and eye box but the RDS comparisons don’t stop there. The TA33 weighs around 10 ounces if you replace the heavy TA60 mount that Trijicon includes with the optic. That is about 4 ounces more than a Micro Aimpoint (6 oz) and about 2 ounces less than full size Aimpoints (12 oz). It is typically at least 6 ounces lighter than most 1-4X style optics with their mounts. So, even its weight is very RDS-like.

It also happens to be very compact like an RDS. It is about 6” long and 1.25” wide at its widest point (the objective end). Compare that to the 10+ inch length of a typical 1-4X optic.

Right about now, you are pretty fired up about the TA33. You are probably already cruising the Trijicon website and pulling out your credit card when… your TA33 buzz is killed by the field of view (FOV) numbers that you are seeing listed in the specs (3.7 degrees, 19.3 feet at 100 yards). Step down off the ledge. It isn’t as bad as it looks. It is definitely tight (the tighest of any optic I have owned) but the limited FOV actually works in the TA33’s favor. Let me explain.

A magnified optic with a 1x setting lets you shoot with both eyes open easily because the image through the optic is close enough to what you see with your unaided eye that your brain can stitch the two images together. In that sense, 1-4X optics are very RDS-like. However, the TA33 has a fixed magnification of 3X. The image that you see through it is vastly different than your unaided eye and your brain will not stitch them together but it can rapidly switch between them or even ignore it all together!

The limited field of view coupled with the compact size and generous eye relief of the TA33 are actually what make it so fast up close. The compact size and long eye relief ensure that you can see around and past the optic to allow for a fuller view of what is in front of you beyond the TA33. The limited field of view through the TA33 gives you less visual input when you are up close which makes it easy to ignore the view through the optic and look past it (target focus) with both eyes open, super imposing the bright reticle on your target, like you would with an RDS. It is essentially works like an occluded eye sight that you don’t actually have to occlude.

If you do need to take some time to refine your shot, you simple allow the eye behind the TA33 to focus on the image through the optic. It happens in a flash, especially if you practice. This is basically what Trijicon calls the Bindon Aiming Concept (BAC). It can be done with just about any optic made but Trijicon has basically mastered it with their eye catching reticles. I have owned TA31 and TA11 ACOGs which are both great in their own way, but the smaller overall size and tighter FOV really lets the TA33 excel at the BAC over those models. The TA33 is the BAC fully realized.

The above has really focused in on the RDS-like quality of the TA33 which is really just scratching the surface.  There are a few other things about it that I should note:

The TA33 may not have a true 1X magnification setting but I think that an argument can be made that it is the most RDS-like magnified optic available based on its compact size, low weight, extremely forgiving eye relief, and massive eye box. It deftly straddles the line between RDS and variable, low magnification optic in way that no other optic can. Its extreme versatility makes it a solid choice for the general purpose carbine. The TA33 is my favorite ACOG made to date.

Eventually, I would like to try one of the TA44S 1.5×16 ACOGs to see where it fits in and how it performs versus an RDS but for now, my long time love affair with the TA33 continues.

Check out the Trijicon TA33 ACOG at Brownells.