The BattleComp 51.0 has landed. If you can’t tell by the name, this BattleComp is intended to be used as a mount for AAC suppressors with the 51 tooth interface.

BattleComp used to offer custom versions of this device but it was never a readily available production item until now. Unlike previous custom versions, the 51.0 features one piece construction (custom versions were welded). It is machined from 17-4PH stainless steel with a black oxide finish. 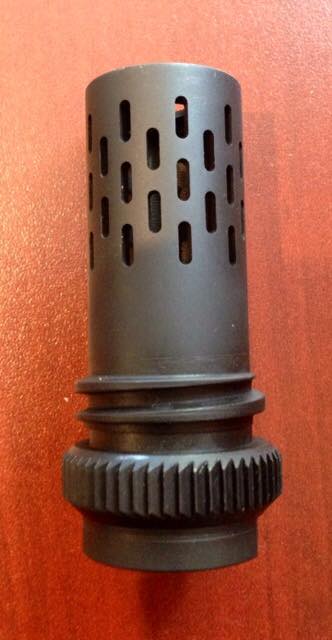 Oh hey, I’m just drinking a frosty beverage from my giant BattleComp. Well, not really, but I wish I was! The folks at Battle Mug are working with BattleComp to bring this BattleComp version of the Battle Mug to market. I hope they are successful because I don’t want to live in a world without giant BattleComps to drink from.

This reminds me that I need to pick up a Battle Mug. 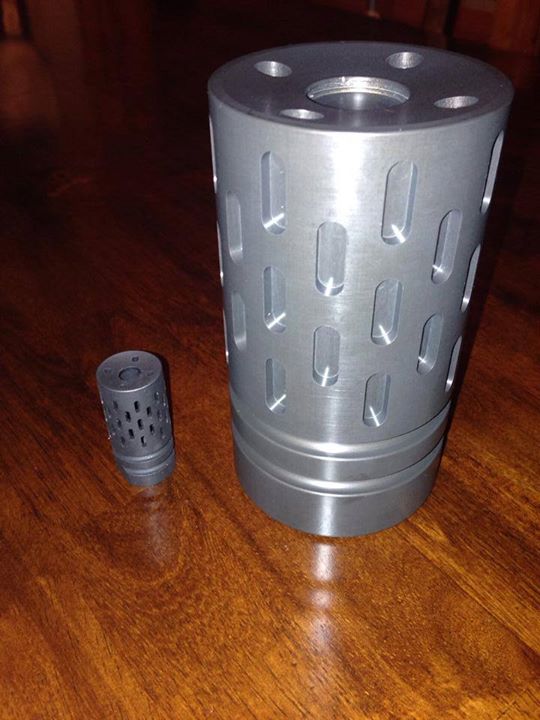 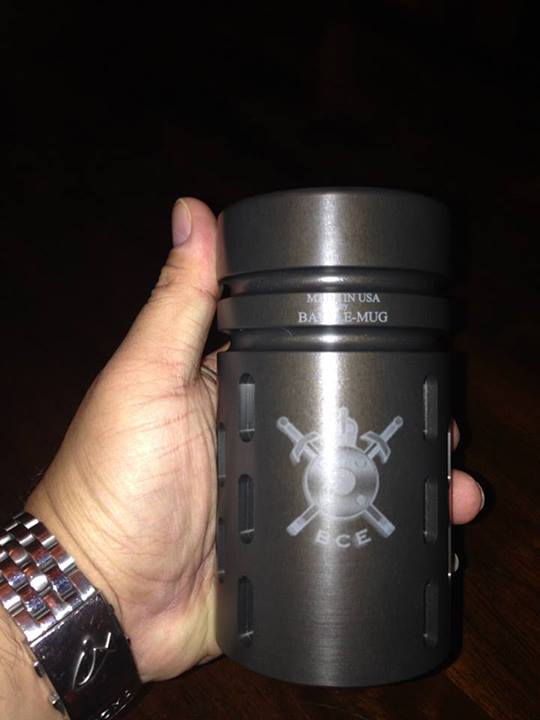 I have been able to test and review a ton of muzzle devices but one that I have never reviewed (though I have plenty of time on them) is the BattleComp. A few of you have even emailed me to ask if I didn’t like them. That isn’t the case at all. I have just never reviewed them.  I recently purchased another BattleComp 1.0. So, while it was still looking new for pictures, I thought this would be the perfect opportunity to finally put together a review.

The BattleComp 1.0 is made from 17-4PH stainless steel. It is available with a bead blast or black oxide finish. It features a single expansion chamber and several small ports around the circumference of the device except for the bottom portion which is closed.

Most of my experience is with the 5.56 versions, though I have tried a 7.62 version. This review will deal exclusively with the 5.56 BattleComp 1.0.

The BattleComp is largely responsible for the current arms race that you see taking place in the industry between muzzle device manufacturers. It was one of the first devices on the market to be viewed as a compensator that is suitable for “tactical” use and it was somewhat revolutionary in how it balanced flash suppression, muzzle and recoil control, and reduced the concussive blast that is typical of most compensators and muzzle brakes. A lot of new devices have come on the market since the introduction of the BattleComp, but it is still the standard by which others are judged as evidenced by how frequently it is used as a baseline of comparison in muzzle device reviews.

There are 3 main tasks that we generally ask muzzle devices to do: suppress flash, reduce recoil, and reduce muzzle rise. Most devices will either suppress flash well or reduce recoil and muzzle rise well. Combination devices (devices with the characteristics of a flash suppressor and compensator or muzzle brake), like the BattleComp, attempt to complete all three tasks. The extent to which the device does these things and other characteristics, like over-pressure and noise to the shooter and those around him, largely determine how the muzzle device should be used. Most muzzle brakes will not be suitable for the indoor spaces you will encounter in home defense and most flash suppressors will cost you valuable seconds in competition. It is up to you to determine which task or tasks are most important to you and your mission and then choose a muzzle device accordingly.

BattleComp takes on all three tasks fairly successfully. It suppresses flash, reduces recoil and controls muzzle rise and because it manages to do these things without the dramatic over-pressure and concussive blast that has traditionally plagued compensators, it is suitable for uses that typical compensators are not suitable for, like self-defense. Make no mistake, the BattleComp is still louder than a flash suppressor. Standing in close proximity to it won’t be pleasant, but it is tolerable, especially when compared to a comp or brake with large open side ports.

I find that BattleComp does an admirable job of suppressing flash. It isn’t going to keep up with a dedicated flash suppressor but it does a good job compared to most combination devices. On a 16” barrel, it suppresses flash nearly as well as an A2 flash suppressor. This may or may not be black magic because there are other devices out there that I have tried that look similar to a BattleComp (a cylinder with lots of tiny holes) but few of them suppress flash as well as the BattleComp.

BattleComp does a great job of reducing recoil. It is true that the 5.56 does not have a lot of recoil but reducing what little recoil it does have means faster follow up shots. Recoil control is an important part of muzzle control because the rearward motion of the carbine is translated into upward movement of the muzzle as the stock hinges against your shoulder. This is why lowering the stock in your shoulder can be an effective way to reduce muzzle rise – it reduces the hinge effect.

The way the BattleComp controls the muzzle is one of the best things about it and also its biggest weakness. I find the BattleComp to be very laterally stable which I find very noticeable and very impressive. Some muzzle devices let the muzzle bounce side to side very slightly. They seem to almost dance around in a circular motion. This isn’t the case in my experience with the BattleComp. It moves only one direction and that is down. Unfortunately, it moves down more than I would prefer. The bad news is that a muzzle device that pushes the muzzle down too aggressively isn’t all that different than a muzzle device that allows the muzzle to rise – you still need to move the muzzle back on target. The good news is that the movement is very predictable and you can be extremely fast with BattleComps.

The BattleComp does push the muzzle down more than I prefer and that is a fairly serious issue for me. In spite of that, I am not sure that any device has surpassed its all-around versatility and functionality which is why I still use them. The BattleComp suppresses flash, reduces recoil, and keeps the muzzle very stable. It manages to do all of these things without kicking you in the teeth every time you pull the trigger. It isn’t the perfect muzzle device (hint: the perfect muzzle device doesn’t exist, at least not without a tax stamp), but it is one of the best.

Check out BattleComp at Brownells.com

BattleComp 2.0 is here. It has the same external dimensions as the A2 flash suppressor which allows the BattleComp 2.0 to integrate with most of the same devices that are meant to work with the A2 flash suppressor. The interior dimensions are nearly identical to that of the BattleComp 1.0 and 1.5 which means that it delivers all the performance that you have come to expect from BattleComp. It comes with a shim kit and Rockset.

You can check it out on the BattleComp website.

I have mentioned the BattleComp on Jerking the Trigger before. It is a compensator for the AR family of weapons that may be nothing short of revolutionary. Much like many other advanced compensators on the market, this one tames muzzle rise and suppresses flash nearly as effectively as an A2 flash suppressor.

However, unlike other advanced compensators on the market, the BattleComp does not redirect any additional sound or blast to the back or sides. This means that it is effective in situations where other compensators would have been a detriment – like indoors, working as a team, or in improvised shooting positions. This is a compensator with seemingly no downside. This is an evolutionary step forward.

Now the designers of the BattleComp have created a new version, the BattleComp 1.5, with users of 14.5″ barrels in mind. It is purpose built to be long enough to bring a 14.5″ barrel to the required 16″ length and it is pre-drilled for pinning. It is available in black oxide and matte stainless finishes and retails for $155.

The BattleComp 1.5 looks like just the thing to help tame the sharp recoil pulse of a 14.5″ carbine gas barrel or to make your 14.5″ mid-length gas barrel even more smooth.

You can read more and purchase a BattleComp 1.5 at the BattleComp website.