By Matt on December 12, 2018 in Preparedness, Survival 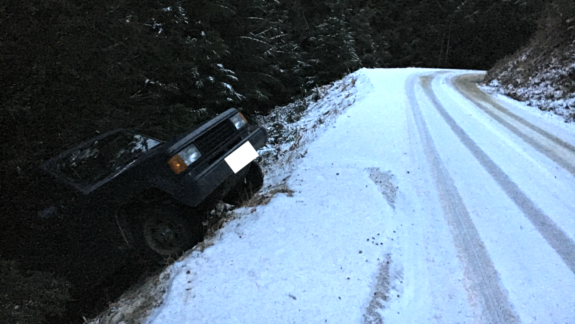 If you haven’t caught on yet, Ivan at Kit Badger and I live near each other and are friends… even off the internet. We both love a good adventure and have been on a few together including hiking a local mountain this summer. That mountain happens to be very near my home and it was much cooler than either of us expected given that is not nearly as well known as other peaks in our area. It was scenic and accessible enough that Ivan filed it away as a potential filming location.

Recently, he called me asking if I wanted to head up there again for an overnighter. I wanted to go but unfortunately had some plans that would keep me down below on the valley floor. We briefly discussed conditions up there. The road in was fine – mostly bare dirt – and the weather has been mild and dry for December. Given that this is one of the smaller peaks in its particular area, we reasoned that it shouldn’t be too socked in yet… This is where you should probably take a moment to view Ivan’s video.

As you can tell from the video, it turned into a massive suck-fest for Ivan from the start. Post-holing through knee deep snow up hill for around 2500 vertical feet with 2 rifles, camera gear, winter weather camping gear, and no gaiters will ruin an outing quickly. Surprisingly, this particular mountain, though remote, has perfect cell phone coverage at the top (likely due to line of sight to some of the cell towers that service the nearest town). Ivan called me from the top, conveyed that he had no real hope of getting a fire going in the current conditions, and managed to talk himself into hiking back down after having just arrived. Darkness comes well before 4PM in these parts so he needed to hustle.

Later, he shot me a text to say he had made it back to the Kit Badger-mobile. I told him to come by my place for coffee and Christmas cookies. I expected to see him in about half an hour, maybe 45 minutes, but the next call I received was from Ivan saying he was off the road and needed a ride. He also said I shouldn’t bother bringing recovery gear because me and my truck wouldn’t be able to get him back on the road (he was right). 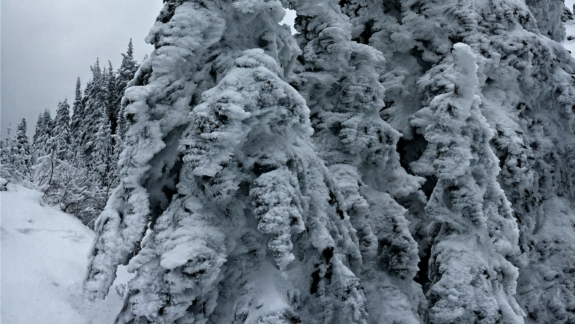 I drove up to get him in my truck. The particular forest road that he was on is fairly tame until you get about 6 miles in where the grade becomes very steep and it narrows significantly. Ivan had gone off the road about a mile up this grade. Surprisingly, the roads were bare dirt until I was within a few hundred feet of Ivan where there was a stretch of very thin, packed snow that had glazed into ice. The ice was basically isolated to just this spot but it was treacherous.

When I arrived, it was immediately obvious why Ivan said the recovery was going to take more than just my gear and truck. The Kit Badger-mobile was sitting just inches off the road but well below the level of the road. He had spun almost 180 degrees and gone off backwards, dropping down the mountain side from the road grade, so that his front bumper was parallel with the road. The only thing holding him on the mountain was a cluster of 3 Western Red Cedars that had grown together at their base. I wasn’t able to measure the angle of the face that his vehicle was clinging to but it was steep enough that you basically had to climb down using the vehicle itself. It was so steep, that the first part of his SUV to hit the tree was his roof!

The road was narrow enough that I would have to drive up beyond Ivan to use a passing area on this single lane forestry road in order to turn around. This would require that I drive up to where the slippage would have occurred. I did the worlds slowest 6 point turn and came back down to Ivan and attempted to stop. The road way was slick and graded down to a ditch on the uphill side of the road so my truck, in spite of the fact that I was absolutely creeping, would not stop. It slid forward about 4 feet and then to the side. This dropped both passenger side tires into a ditch. The ditch was a bit muddy but not terrible. The worse part is that there was a large culvert 8-10 feet in front of me that limited how much I could move the truck to free myself. If I moved too far forward, it would have been a double recover. 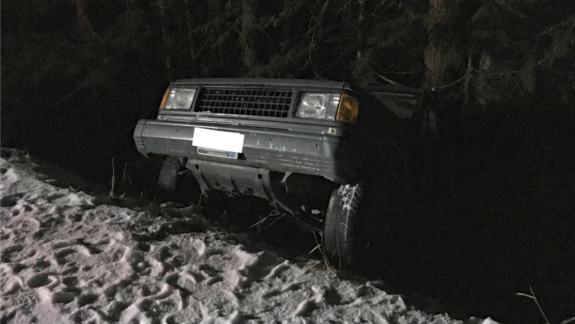 This story is already getting long so I will say that we were able to self rescue my vehicle by wedging branches under the passenger front tire to give grip and create an easier transition back onto the road surface. Ivan was able to watch my forward movement to keep me out of the culvert. Fortunately, I had just enough clearance to prevent hanging up on the road’s transition to the ditch and I had the confidence to keep trying to rock the truck out because it was always able to move at least half a vehicle length at all times instead of just bogging down in one spot.

We finally got down the mountain to my place, ate some dinner, and started calling the right people to get the Kit Badger-Mobile recovered before some impending weather made it even more difficult. While we were waiting for the wrecker, a local sheriff’s department SUV pulled into the driveway looking for Ivan. It seems someone had found the now unoccupied Kit Badger-Mobile and called it in when they couldn’t find a driver. The sheriff’s office called the towing company to see if someone was taking care of the vehicle and the towing company passed on Ivan’s name and location (my house). The sheriff’s deputy was brief, courteous, and professional. He requested, if this ever happens again, that we notify them to head off any concern or effort. Which leads right into lessons learned…

Ivan and I were so focused on getting off the mountain and starting the recovery effort that we didn’t even think of calling local law enforcement. We won’t make that mistake again. It is also comforting to know someone would have eventually come by and found Ivan if he couldn’t get a call out. It’s nice to live in a place where people still stop to help and call.

This entire story also highlights the importance to having some kind of vehicle based emergency kit, especially in winter or when you choose to go places that are inherently risky. Ivan was fortunate to have both his regular vehicle kit and all his winter camping gear. He could have gone overnight if he had to or he had what he needed to potentially walk down the mountain. I however, only had some recovery tools. I had not moved my winter kit into my truck for the season yet but has already been fixed. It was probably not wise to run out the door without more preps. 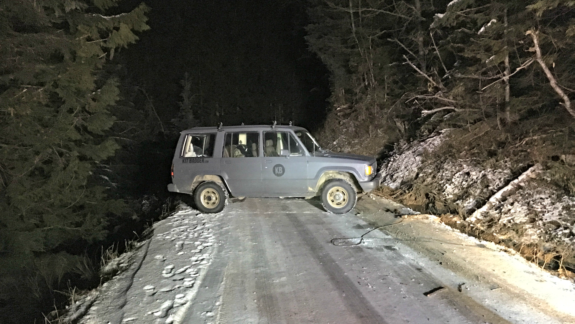 These events also highlights the importance of having some know-how if you are going to seek adventure. We have at least some recovery skills. I could have very easily made my situation worse with my truck by burying it up to the axles. However, we were watching the situation and as long as I could move the truck forward and back, I was feeling free to keep trying. I also had some tools that I could have used but they would have been a last resort.

Perhaps the biggest take-away here is the importance of building yourself a safety net BEFORE you begin your adventure. You should always, at a bare minimum, let someone know where you are going and when to expect your return. In our case, Ivan let me know where he was and when he was there. I would have gone looking for him if he couldn’t get a call out.

Finally, I strongly recommend having a very good roadside assistance plan. Both Ivan and I carry roadside assistance with our insurance providers (USAA) and they have been excellent. They completely covered his recovery effort except for a chain-up fee. They would have even covered the tow all the way back to Ivan’s place had the vehicle been disabled. I should note that you should be prepared to deal with a call center employee that is helpful, but more used to dealing with flat tires on the highway than backcountry recoveries. Just be sure you are able to talk directly to the local recovery company after your roadside assistance provider makes the initial contact.

The adventure wasn’t really over yet. The recovery wasn’t straight forward and the narrow road coupled with ice complicated things. It was so slick that the wrecker pulled itself into the ditch while it was pulling up Ivan’s SUV. Think about that. The wheels were chocked, brakes set, and it was pulling from down hill in relation to Ivan’s SUV. That means it pulled itself uphill and into the ditch in spite of the wheel chocks. That is how slick this road surface was. The wrecker driver got himself out of the ditch and they both drove down the mountain.

Ivan ended his already long day with a 60 mile drive home with no rear windshield in 20 degree weather… but at least he made it home.

3 Responses to Sometimes You Choose the Adventure… Sometimes It Chooses You!