I am going to list some specs for you…

If you hadn’t already read the title of this post, you might think I was talking about an AR-15. That combination of features is very unique in a bolt action rifle and it is what makes the Ruger American Rifle Ranch so great. Of course, the sub $400 price tag helps a lot too. 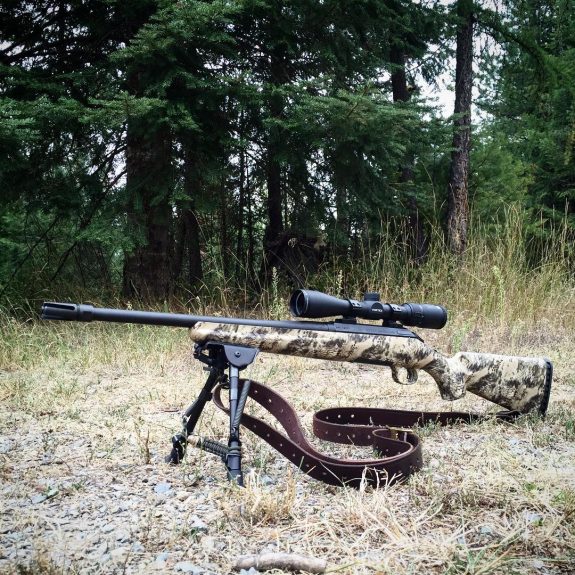 This isn’t going to be an in-depth review. I am just going to briefly sing the praises of a rifle that I basically impulse bought about a year ago because of the price tag and features above. I wasn’t expecting a lot from it but the more I shoot it, the more I have come to appreciate it and the more I think a lot of AR-15 shooters would probably make room in their safes for a rifle like this.

The sub $400 price tag of these rifles makes them a bargain but their features are what makes them unique. There are a number of .223 Remington chambered bolt-action rifles on the market. They typically have twist rates on the slower end so that they can effectively stabilize lighter varmint hunting oriented bullets. This rifle stands out because it bucks those trends. Instead of a .223 chamber, it sports a 5.56 chamber. Instead of a slow twist, it has a 1 in 8″ twist which will easily stabilize projectiles up to 77 grains in weight while still handling a light of the lighter bullets on the market. That is a lot words that really just boil down to one thing for an AR shooter like me… It will shoot the same ammo as my AR-15s.

If you have a suppressor, you should probably just stop reading and head to your local gun shop right now. These rifles are a blast with a can. The barrel is threaded in a pitch that will accept all the common suppressor mounts and the medium contour barrel is beefier than a typical sporter weight, bolt-action barrel to reduce deflection from the weight of the can. This rifle was obviously made to be suppressed.

I have mine set up with affordable but good accessories. I picked up a Vortex Diamondback 2-7×35 during a Black Friday sale. It was just sitting in a box on top of my safe, waiting for a project like this. That optic is mounted to the rifle with Talley 1-Piece 93X725 Rings (the rifle comes with a very nice 1913 rail attached so you could set up the optic however you want including a red dot if you are so inclined). I replaced the included muzzle nut with a Smith Enterprise Vortex Flash Suppressor because I have always had excellent luck with those having little to no effect on accuracy.

To keep the rifle stable, I have a Harris bipod mounted on it pretty much full time and I use an Andy’s Leather Rhodesian Sling. Between the bipod and the sling, I can get stable in any position. So far, I haven’t seen many ill effects on accuracy while using a tight sling but I think I may open up the stock’s barrel channel a bit just to be safe.

Speaking of accuracy… I don’t have pictures to prove it so you will just have to take my word for it (and the word of several other reviews) but this rifle is extremely accurate. My hoard of Black Hills 75gr. Blue Box ammo typically groups into less than an inch at 1oo yards. The same goes for Prvi Partisan 75gr. It even shoots Wolf Gold 55 gr well and that ammo matches the BDC reticle in the Vortex Diamondback 2-7×35 very well with a 50 yard zero. Those of you who reload could probably whip up a real doozie of a load for this rifle.

It’s not perfect. The stock is a bit flimsy (not as bad as some bargain rifles) and, as a rifle with no iron sights, it should have an integral comb riser. The magazines are proprietary and expensive for what the plasticy little things that they are. This is the bottom line: This rifle carries light, shoots well, costs little, works with all your AR-15 ammo, suppresses well, and is tons of fun.

7 Responses to The World’s Shallowest Review of the Ruger American Rifle Ranch 5.56