The late Lt. Col. Jeff Cooper is widely considered the father of modern training in the use of firearms. He is the founder of Gunsite, and he remains one of the most important and influential figures ever in the realm of firearm training.

It has been said that “You have to know where you’ve been to know where you’re going.” That is generally true but doesn’t seem quite right when it comes to Colonel Cooper because so much of what he taught is still espoused verbatim in firearm courses around the country. His teaching isn’t just where we’ve “been” – it’s where we are still going. 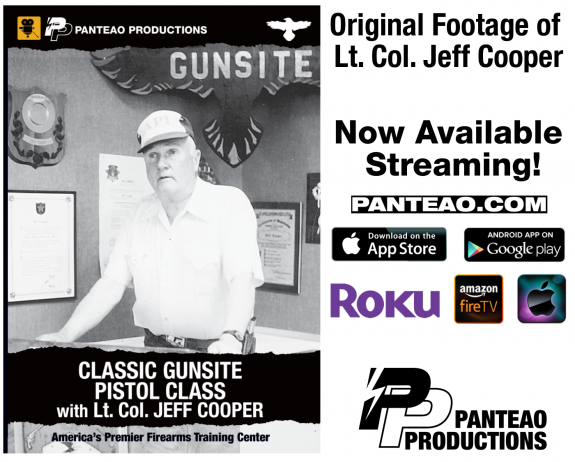 He taught in a time before Youtube and Instagram so much of his wisdom is confined to his writings. Very little film exists of his courses. So, what if someone turned up some footage and you could sit under him as he lectures students in a Gunsite pistol course? You would, like me, would probably jump at an opportunity like that.

Panteao Productions is offering just such a chance. They have recovered footage of Colonel Cooper teaching at Gunsite. They preserved the video and improved the audio. The video includes in depth discussion of Cooper’s color code system of awareness, mindset, and even some range footage. There is even an appearance by another influential figure who has already past on, in a segment with Louis Awerbuck on handgun malfunctions.

This is the closest thing you can get to a time machine. Check out Classic Gunsite Pistol Class with Lt. Col. Jeff Cooper from Panteao Productions.