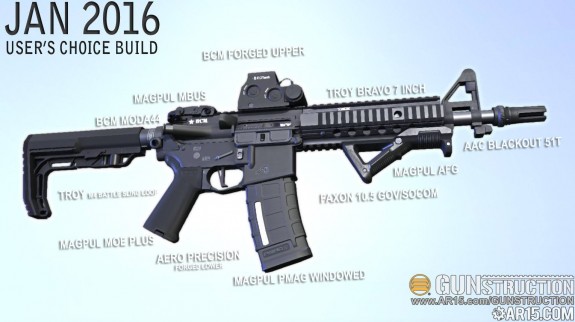 Gunstruction’s User’s Choice Builds are comprised of the most popular parts from each category in their virtual AR building software. These builds reflect the parts that Gunstruction users selected most frequently for their virtual builds which makes it a interesting window into consumer trends… and there is always something interesting about these builds.

January’s build has the first shorter than 16″ barrel that I can recall making it into a User’s Choice Build. It also features a suppressor mount in the AAC Blackout 51T. Perhaps Gunstruction builders are trying to build their SBRs and suppressor hosts before ATF 41P takes effect.

You can start building your own virtual AR-15s to check pricing, weight, and aesthetics at Gunstruction.