The INFORCE WMLx is more than just a 500 lumen flame throwing version of the popular WML. It has an all new user interface that works very well whether you prefer momentary only or constant on activation modes. 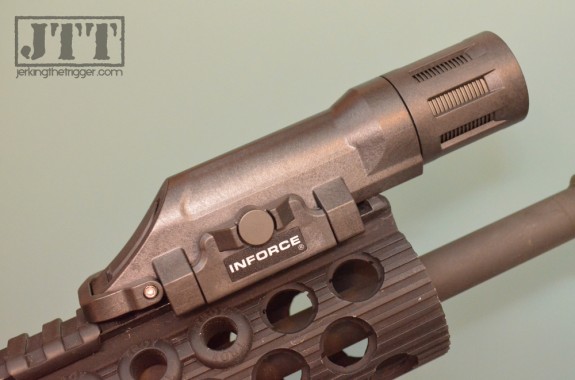 The WMLx keeps much of what makes the WML great. It is lightweight (4 ounces) thanks to polymer construction. It has a switch that allows it to be used in any position on the rail. It still has an easy to use, built in rail clamp. The lock out bail is also still present which is great because it is a tremendous feature (see the JTT review of the WML to find out why).

The most notable differences are that the light is longer to accommodate 2 CR123A batteries and, when you turn it on, you are greeted with 500 lumens of light versus the WML’s 200. The WMLx also has a new optic to shape the light coming from its LED (more on this later).

The switch interface has been simplified and streamlined. Now there is a lever on the side that allows the user to change the way the switch functions. You can push the lever rearward for a momentary only switch – the light will only activate while you are actively pressing the switch.

Move the lever forward for constant and strobe functionality. This mode will feel familiar to users of the Multi-Function WMLs but it has been improved significantly with the removal of the low mode. You can now access only High and Strobe from this mode. Strobe can be deactivated manually leaving only high mode. If you tap the switch, the light comes on and stays on. Tap it again to turn it off. If you press and hold the switch for more than a ½ second or so, it will turn off when you let go of the switch. 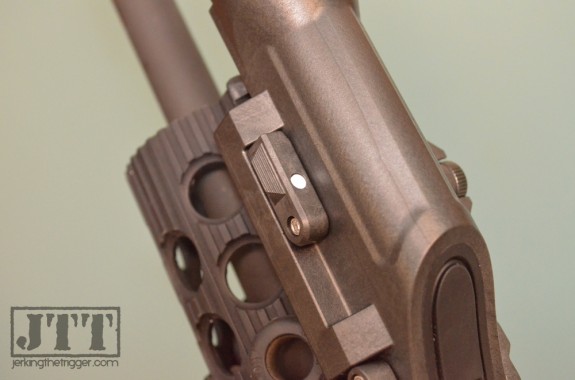 The WMLx still feels like a WML and that is a good thing. Everything I like about the WML is still intact – lightweight, low cost, lock-out features, easy mounting, etc. That is good but what is even better is that INFORCE managed to improve the user interface.

I prefer to have some sort of constant on mode available to me so I used the “multi-function” version over the momentary only WML and learned to live with its switch interface (not that it is hard to do). I never used the strobe so I turned it off and only really ever used the low mode on accident. The WMLx’s new switch interface strips away all that clutter. There is no guess work. If you press the button you see 500 lumens of light. If you accidentally tap when you meant to press, your natural reaction is to tap again which instantly turns the light off. It works extremely well and I hope INFORCE adopts it for the original WML as well.

The new reflector is interesting. It splits the light into 3 distant rings. The center hotspot is very bright and has solid throw. There is a moderately bright ring around that which lights up a slightly wider area. Finally, there is a third and outermost ring that is very wide and provides more than enough light to ID a person in a dark room. If you point it at a wall, it looks a bit strange because each ring is so distinct, but in use, it feels like any other light with a bright hotspot and tapering output toward the edges of the beam.

The rail mounted portion of the WMLx is basically identical in size to the WML so those who are mounting them toward the end of a handguard won’t really notice much of a difference in size.

I found the runtime to be true to the advertised 2 hours in my admittedly unscientific eyeball test. I have also had no issues with the light draining batteries as has been reported by some WML users. In fact, I own 7 WMLs and none of them have ever drained their batteries when not in use. 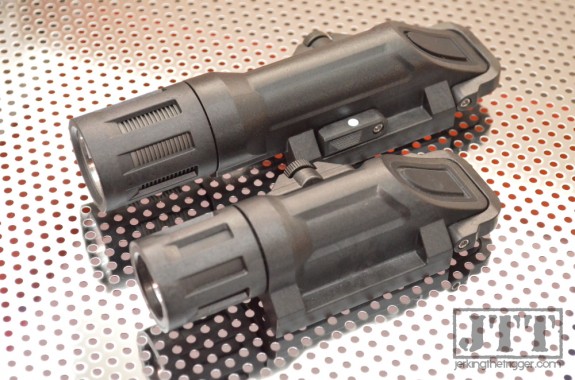 INFORCE made a good light better. They retained the best parts of the WML and refined the user interface. That is a recipe for a winner.

Check out the WMLx at INFORCE.