One of the blessings and curses of having a blog like JTT is that I sometimes get to find out about cool stuff well in advance. That may not sound like a curse but it can be tough to wait for the item to actually hit the market and to keep from telling all of you about it! The EXO from Unity Tactical is one such item. 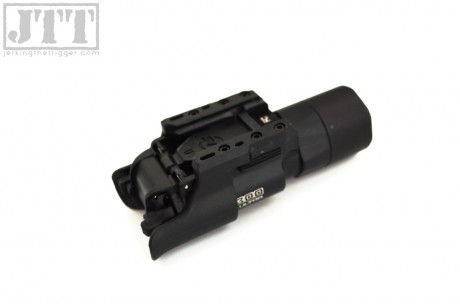 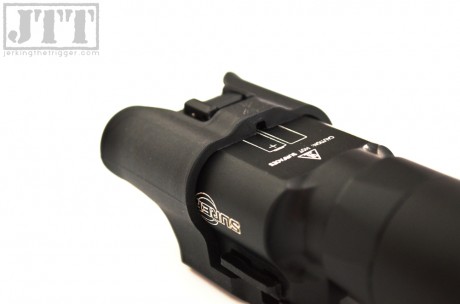 The EXO is a replacement mount for the Surefire X200, X300, and X300 Ultra lights that integrates a shroud that prevent accidental activation of the light. Basically, with this simple polymer replacement part, Unity Tactical has corrected the major shortcoming of using the X300 and similar lights on a carbine.

The EXO is a single molded piece of plastic. Installation is simple. You remove the X300’s OEM mount and install the EXO in its place, reusing the same 6 screws that fasten the OEM mount. 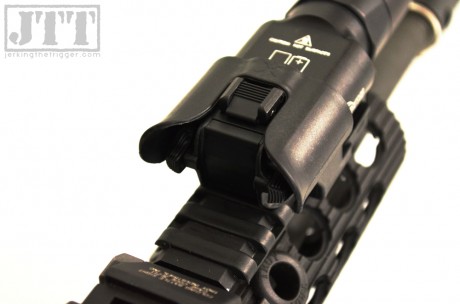 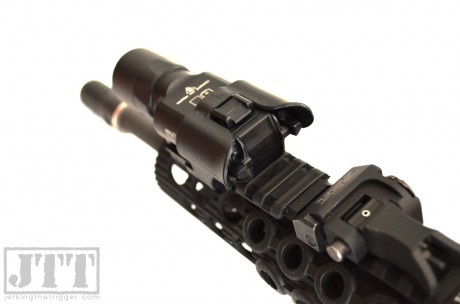 The single biggest knock against using the X300 on a carbine is that it is prone to accidental discharges of light. The X300’s rocker switch can be activated by pressing it forward slightly and, thanks to its exposed design, this is easy to do accidentally. This isn’t just an operator safety issue but also a storage issue. If you store a carbine with an X300 installed in a soft case, you can be sure that your batteries will be dead by the time you remove it from the case due to the case activating the light. These are the problems that the EXO seeks to correct.

When Unity Tactical mentioned the upcoming EXO to me months ago, I was extremely excited. That very week that Unity Tactical contacted me, I had given up another failed attempt at creating a shroud for the X300 that would prevent accidental activation (purely coincidental, I had nothing to do with the development of the EXO). I tried modifying a film canister to sit on the back of the X300. I tried fabricating a shroud from Kydex on my own. I even reached out to a couple pro Kydex benders to try to make something similar but nothing ever worked out like I hoped mostly because it was difficult to get the shroud to stay on the light. 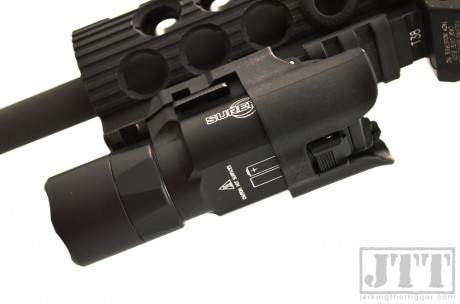 Unity Tactical ingeniously worked around the issue of keeping the shroud attached to the light by integrating it into the rails. Unlike my feeble attempts at something similar, this is not a snap on part. It would be nearly impossible to remove it accidentally.

I have tested the pre-production version and I am thrilled with it. It greatly reduces the likely hood of accidental activation when the carbine is in hand and when it is stored in a soft case. The EXO’s shroud extends back beyond the end of the rocker switch’s tabs so that you actually have to deliberately move your thumb into the guard to activate the light. The EXO is flared so that there is plenty of room inside the shroud so access both momentary and constant activation for both right and left handed users.

I have found that the EXO actually makes the X300 easier to use as a carbine mounted light. I can stage my thumb in the little gap between the rocker switch tab and the shroud. From that position, I can easily press down for constant on or in for momentary on. 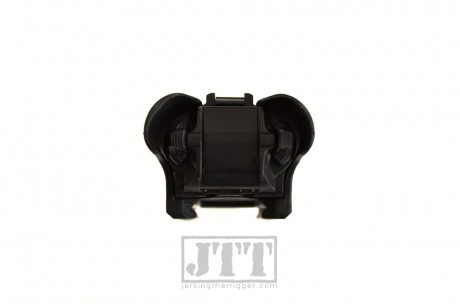 The X300 has a great beam profile and activation method for use as a carbine light but it has always been plagued with accidental activation issues. Those will soon be a thing of the past. If you have an X300 on your carbine, this is going to be must have gear. The Unity Tactical EXO will be available later this month.

Unity Tactical is gaining a big time reputation as problem solvers. They burst onto the scene with the ATOM, a system that solves the issues with mounting an Aimpoint Micro on a handgun and allows the user to swap sights as technology advances. Then they introduced the FUSION mounting system to consolidate the tangle of mounts that can crowd your carbine’s handguard. Now they are set to roll out the EXO. That is an already impressive body of work.

The photos shown are of a pre-production sample. The production model may vary and will have increased texture and less visible mold lines.