The FUSION from Unity Tactical is a modular mounting system that gives the user the ability to mount a number of critical items on the same mount. It’s like a Choose Your Own Adventure book for your carbine. There are so many different options, you’ll want to try them all. 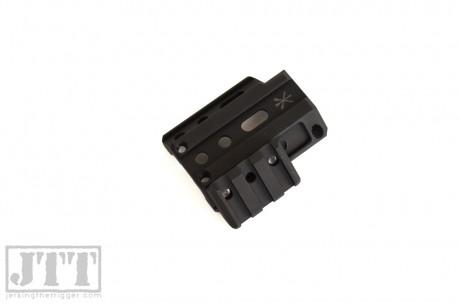 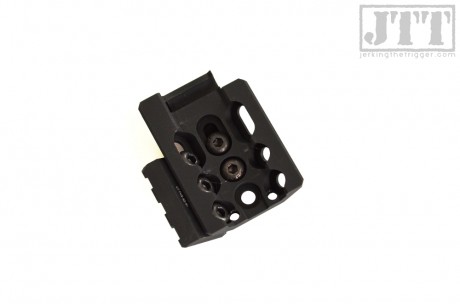 The FUSION consists of several components.

All the components are machined from 6061-T6 aluminum and hard anodized. The come packaged with every screw (and usually extras) and hex wrench that you will need to that particular component. The HUB comes with a very large tube of blue thread locking compound which is a very nice touch. The FUSION is available in either black or flat dark earth. 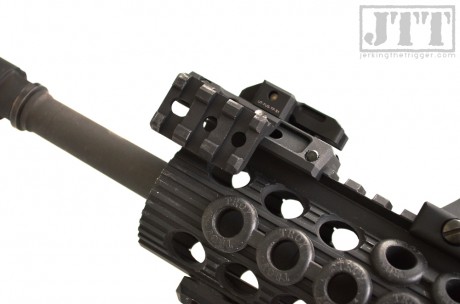 Testing the FUSION is like a marathon. It seems like the configurations are endless. I tried to test as many as I could over a number of range visits.

Installation and configuration of the FUSION is easy. The HUB slides onto the rail and secures with a cross bolt. It must be slid onto the rail so users with a fixed front sight base (FSB) will need to remove the FSB or slide it on all the way from the rear of the receiver. I should note that the cross bolt was extremely tight on my sample. It was so tight that it screeched and squeaked like a dying rabbit when you brute forced it into place. Thankfully it loosened a bit over time.

Each individual component bolts easily to the HUB with the provided screws. I recommend using thread locker just because you should always use thread locker on a gun. I didn’t use thread locker because I have to return all this stuff but I had no issue with screws loosening in my limited testing. All of the screws holes on the HUB are recessed to prevent the screws from interfering with installation.

There were several configurations that I really, really liked and they all have one thing in common: the BUIS. The BUIS in this set is excellent. It is very compact and, cleverly, it can be turned into a fixed sight with the installation of an included set screw. It is just a really nice little sight. The HUB with just the BUIS and a Surefire Scout in the offset position in an amazingly compact and capable configuration.

The Extension Rail gives you some interesting possible configurations. You can mount rail mounted pistol lights or something like INFORCE WML to it but I think it really shines when you direct connect a Surefire Scout light or handheld light in the 1″ Light Ring Mount. The Extension Rail lets you push the light out well forward of the end of your rail where the effects of barrel shadowing are minimized. The lights are still tucked in fairly close thanks to the direct connect capability. 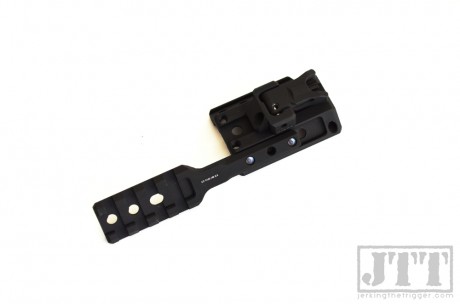 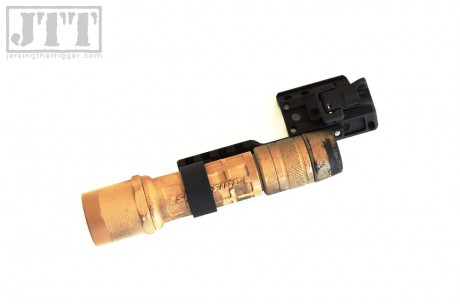 The Wing Mount is one of the most versatile pieces in the kit. It place the rail and object connected to it at 90 degrees to the top rail in a slightly lower position than the Offset Rail. It can be used to direct connect a Surefire Scout, the 1″ Light Ring Mount, or pistol lights. In fact, the INFORCE APL is magic on the Wing Mount due to its unique switch. When mounted 90 degrees to the top rail like this, you can now push down to activate the light and it is held a bit higher and tighter to the handguard than it would be on a side rail. If you don’t like having your light up in your field of view, the Wing Mount can lower it a bit versus the Offset Rail.

The 1″ Light Ring Mount is great. It allows you to attach a handheld light directly to your HUB or some of the other components. It is flexible enough to handle even lights with a slightly larger than 1″ diameter like the Surefire G2L. If you have a handheld light like the Surefire Fury or Streamlight PolyTac line that you want to put in the 10-11 o’clock position, the FUSION HUB with this Light Ring Mount and the BUIS is a great setup. 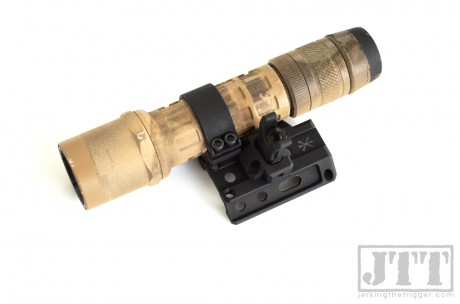 The Forward Rail bolts to the bottom front of the HUB and basically gives you a rail extension at the same height as your handguard’s top rail. This is a great place to mount a Surefire X300, INFORCE WML, or other pistol light. It also allows you to direct connect a Surefire Scout light which gives you some very cool functionality. The Scout Lights mount very low because of the direct connect feature so they stay well out of your line of sight. There is enough room to reach up there and hit the tailcap switch with your thumb but this setup works best with a tape switch.

There are many, many possible configurations that I couldn’t test. For instance, an IR laser can be mounted directly to the HUB and still leave room for an offset light on one of the side positions. If I was set up for night vision, I would be taking a very hard look at this capability because it tucks everything very, very close together.

There does seem to be some misunderstanding about the FUSION out there that I should at least attempt to clear up. The FUSION is not a rail replacement. You could do a lot of what the FUSION does with a few mounts and a typical 4 rail handguard. The FUSION is a mount replacement. It consolidates mounts and other items that would typically be connected to the muzzle end of a handguard. By consolidating mounts, you save weight, gain space, reduce bulk, and add durability due to less potential failure points. It also happens to be a great mounting solution for the current crop of slick sided, narrow tube rails that are so popular right now.

I find the future of this system just as interesting as the FUSION itself. The HUB is really just a means to an end. I can see that the logical conclusion of a system like this might be integration directly into a dedicated handguard rail, forgoing the need for the HUB. I suspect that we will also start to see additional accessories and new configurations as the system matures. 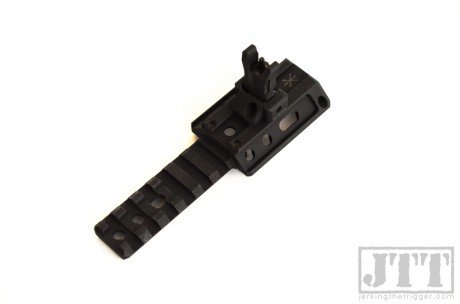 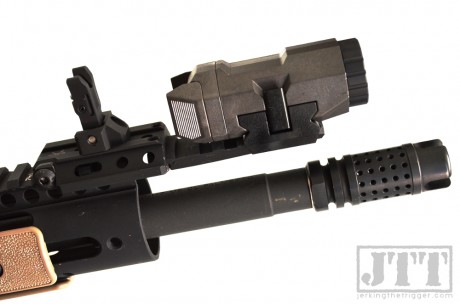 The FUSION is successful at what it sets out to do. You can use it to reduce to the number of mounts necessary to attach just about everything you normally attach to your handguards. The options and configurations are seemingly endless. Those options and configurations will only expand further as users get their hands on the system and adapt it to new technology and current TTPs. The beauty of the FUSION is just how adaptable it really is.

Check out the FUSION at Unity Tactical.

Note: The photos may show the FUSION with other iron sights visible. I am not advocating having multiple sets of back up iron sights. I just didn’t want to remove sights that were already zeroed for testing.