The Hive Satchel is the result of collaboration between Chris Costa and Blue Force Gear. This bag is purpose built to serve as a discreet weapon carry bag. Blue Force Gear is so dedicated to maintaining the discrete nature of the bag that they are only releasing it in limited numbers in each colorway in order to make it less likely that the Hive ever fits any particular visual pattern.

I have spent a few months with this bag and, frankly, I am still not sure where I stand on it. On one hand, it does everything that BFG says it will do but on the other, it is designed for such a specific functionality that requires such specific styling cues that I am left wondering about its general utility. Hopefully I will have made up your mind about the Hive (if not my own) by the end of this review. 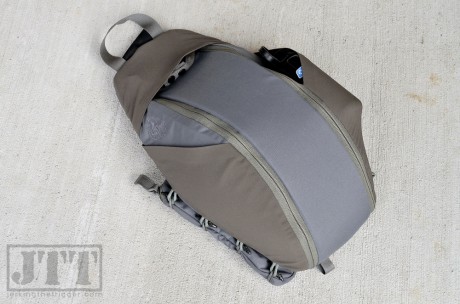 The Hive Satchel is built from the ground up to completely conceal 2 different types of weapon systems – PDWs and handguns. In order to prevent any type of visual clue or pattern that might indicate the abg’s purpose, BFG pulled out all the stops. The styling is unlike any other concealed carry bag, modern and sleek. The colorways are limited to just 300 pieces per. The satchel is padded throughout so it holds its shape in spite of any bulky or heavy objects that it may contain. The back panel is stiffened to prevent sharp edges from digging into the wearer and, again, to allow the bag to hold heavy objects while still holding shape.

BFG really went all out in terms of access with this bag. A discreet carry bag’s usefulness is diminished if it does not provide fast access to its contents. The bag is completely ambidextrous. Its single strap design allows it to be worn over the left or right shoulder. The main compartment has double zippers that can be opening together when you need fast access and clearance for something like a PDW or separately when you need to access the contents of the bag without advertising the contents. 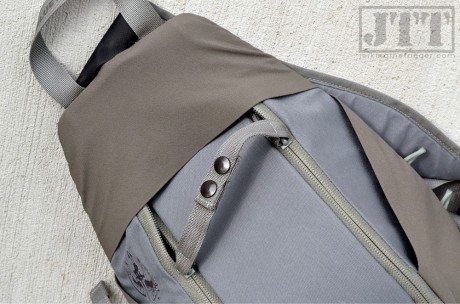 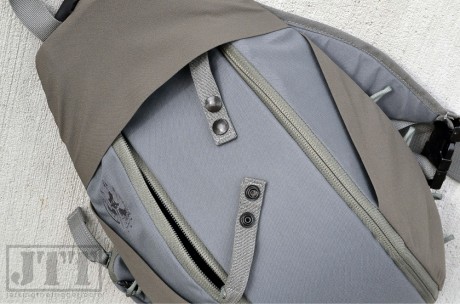 Finally, a bag like this needs flexible organization which BFG accomplished with lots and lots of loop lining. This allows you to use their Dapper line to outfit The Hive based on your specific needs.

The bag itself is constructed from lightweight CORDURA nylon and slightly stretchy tweave material. The tweave is used pretty ingeniously. The shoulder strap is outfitted with a small section of a discrete MOLLEminus form of MOLLE webbing. 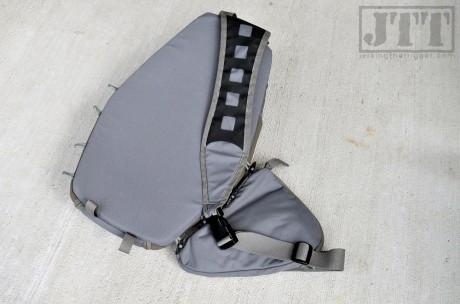 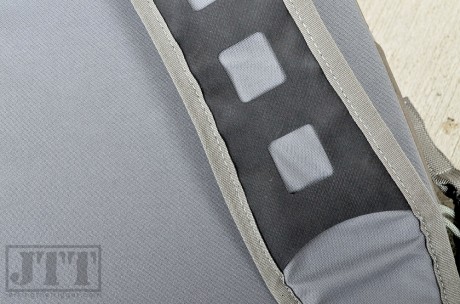 As I get into my observations from using this bag, I will say up front that the biggest hurdle that I had with it is that I probably wouldn’t use a bag that looked like this as my everyday bag. The styling that its intended task necessitates just didn’t gel well with me at first. Normally, in gear reviews, I don’t care how something looks but this is different given the intended purpose of this bag. It is supposed to look unremarkable, but compared with my style (if I have one) it can standout at times. This is, of course, entirely subjective and I grew to like the bag.

The grey colorway looks much better in person than it does in the initial product pictures. In fact, I would say the two greys look great together. It helps a lot that the zippers are color matched unlike the contrasting zipper shown on the prototype bag. I can’t tell you how weird it feels to be discussing the aesthetics of a piece of gear. 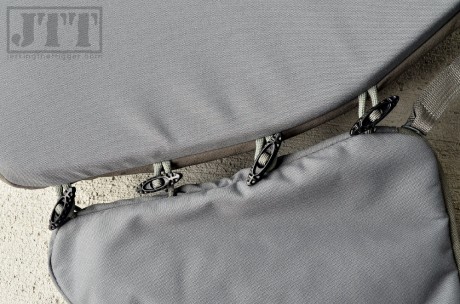 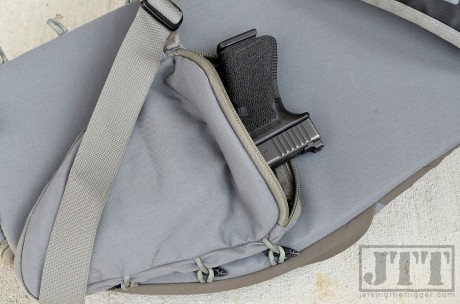 The bag does look fairly unremarkable, especially in an urban setting or places where there are often crowds. Go to any public place like a zoo or amusement part and you are likely to see several sling style bags being worn. It is these types of settings that really allow the Hive to shine. It looks like something a tourist, city commuter, or maybe a cyclist would wear and I mean that in a good way. In this case, that means it is a successful design.

The bag always holds its shape. Every part or it is stiffened with either padding or HDPE. This is absolutely key to its mission. It will not betray its contents by losing its shape.

The shoulder strap design on the Hive deserves heaps of praise. It is wide, comfortable, and probably the most successful ambidextrous strap design that I have ever seen. It is truly just as comfortable mounted on either side and the pouch at the base of the strap moves with the strap which is probably why this strap is so successful. It attaches via 4 toggles that slip into paracord loops. This system is easy to use and robust.

I have no need to daily carry a PDW so I mainly used the smaller pouch on the strap to carry a G19 or G17. It works well for this. It is just the right shape and is positioned such that is can easily be pulled around to in front of your hip and then ripped open to initiate the draw stroke. It is pretty intuitive. I would strongly prefer to carry a CCW handgun here versus the main compartment. 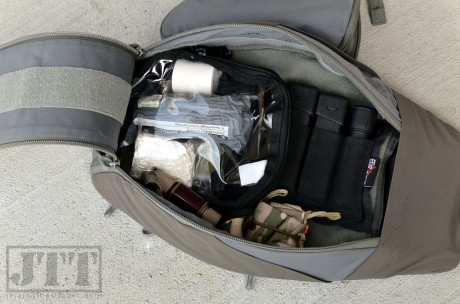 The double zipper on the main compartment works well. The zippers can be snapped together so that they can be ripped open together. This is important to create a large opening through which the PDW can be accessed. I find that it is actually better to slip your fingers up under the tweave cap at the top of the bag and grab the flap itself rather than the zippers.

The exterior of the bag has a slip pocket on each side made from tweave. The tweave has some stretch which lets the pockets really grip water bottles. This is nice considering that the bag is designed to be pulled around in front of the user for access which orients the water bottle pouches on their side. Without the stretch of the material, the bottles might fall out. 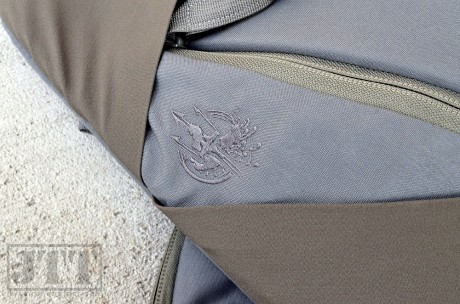 If I sound conflicted in the opening part of this review, it’s because I am. You can see in the “observations from use” that the Hive does what it is supposed to do. However, since I don’t have need to carry a PDW, much of the functionality is lost on me. That functionality largely dictates the styling of the bag which doesn’t quite fit me. So I am stuck between not really caring for how it looks and admiring how well executed it is which is a strange place to be when you are used to reviewing gear based on its functionality and ignoring its looks.

This is a great CCW bag with big time EDC potential for those who like the styling. It could also be a great grey man bag for those who need to look like tourists rather than snake eaters but that isn’t really something I am qualified on which to comment.

Check out The Hive Satchel at BlueForceGear.com.