Every time SerePick makes the Bogota Entry Sets smaller, I think there is no way that the new smaller version can be as useful as the already compact full-size version and every time I try them, I am amazed at how little they actually give up to the full size set. 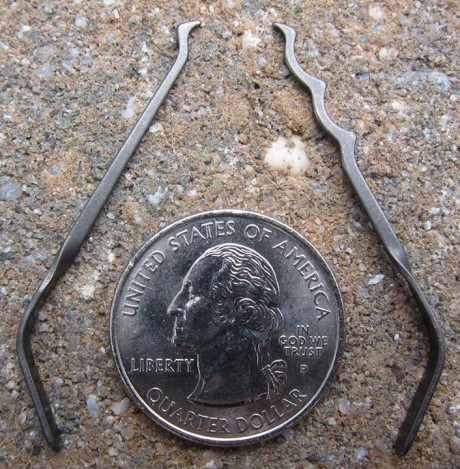 SerePick is outdoing themselves this time. The new Nano Bogota Entry Tools will be available shortly. These things are TINY. They are made from titanium so they should be very, very discreet. You should be able to stow these just about anywhere.

These should be available at SerePick.com soon.

Vigilant Gear has their now has their own version of the Titanium Entry Card. I was recently given the opportunity to review the ITS Tactical version, so I was glad to have the chance to check out the very different Vigilant Gear version.

The Vigilant Gear Titanium Entry Card is a complete suite of Bogota Rakes, pick, and tensioner all wrapped up in a titanium credit card form factor. Titanium is chosen for its low magnetic signature which makes it more discreet than a steel pick set can be. It also makes the set fairly lightweight and corrosion resistant.

The set includes 6 individual lock bypass tools: 5 picks or rakes and 1 tension wrench.  The picks/rakes include a classic short hook, Bogota Single, Bogota Double, Bogota Triple, and Bogota Sabana. The tension wrench is double ended and is designed to work well for top of keyway tension techniques. A Tyvek sleeve is also included.

The Vigilant Gear Titanium Entry Card is one of the most complete credit card type pick sets that I have seen. The tool selection is wide and varied. An advanced user should be quite happy with their ability to choose the correct rake for the task at hand. Novice users will still find themselves at home with the Bogota Triple, short hook, and reasonably forgiving tension wrench.

The tension wrench is one of the better ones that I have seen in a set like this. It is cut into the card at an angle to maximize its length. I find that longer tension wrenches tend to be more forgiving. You don’t have to be as heavy handed with them and that is a big plus when you are feeling your way around inside a keyway. You wouldn’t choose this tension wrench for a kit of dedicated professional lock bypass tools but it is quite good considering the form factor.

It is to be expected that the tools in this kit are a bit rough. A standard set of Bogota Rakes exhibit a high level of polish that allows them to move quickly and easily in the keyway. The rakes in the Vigilant Gear Titanium Entry Card can’t be polished to the same extent because of the constraints of the form factor. They have a level of finish that is consistent with their purpose as a last ditch tool. You will find that they do smooth a bit with use so don’t be discouraged if they are somewhat difficult to move in the keyway at first.

The Vigilant Gear Titanium Entry Card is impressive in its variety and completeness. I like having all of these choices at my fingertips.

Check out the Vigilant Gear Titanium Entry Card at VigilantGear.com. Stay tuned to JTT for a chance to win one!

Lock picking can be a very useful skill to have. It requires practice, finesse, practice, the right tools, and more practice. You can’t buy practice or finesse but you can buy tools. TOOOL has designed a particularly clever set of lock picking tools called the TOOOL Credit Card Pickset.

This clever credit card sized piece of metal contains an entire pickset complete with picks, rakes, and tension wrenches (the frame). There are two versions which are both available at the link. V2.0 looks like the pick of the liter.

Disclaimer – Jerking the Trigger does not advocate using these for anything illegal. Never pick a lock that the owner has not given permission for you to pick. Check your local laws before carrying these tools.