Law Tactical’s AR Folding Stock Adapters aren’t cheap but they are good so you know it was only a matter of time before the knock-offs started showing up. Most of the knock-off adapters are visually similar but should be very easy to spot due to their noticeably lower quality hardware and sling stud (genuine Law Tactical AR Folding Stock Adapters feature a QD sling socket, not a stud). The stud can be seen at the bottom of the adapter in the image below. 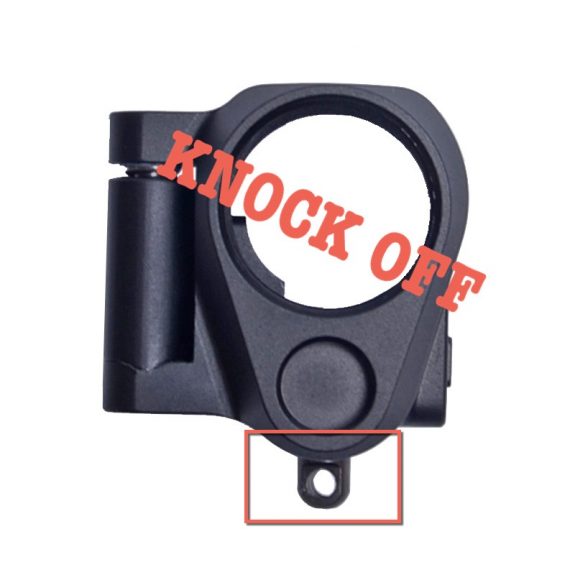 These counterfeit adapters are available under a number of brand names and from a variety of sources. If you are in the market for a folding stock adapter, make sure you know what to look for. As always, it’s best to stick with an authorized dealer when purchasing new.

If you are one of those shooters that thinks FDE is the new black, I have good news. A limited edition FDE version of the Law Tactical Gen3-M Folding Stock Adapter is now available exclusively at Brownells. The even better news is that it is the same price as the black version and it’s on sale right now. 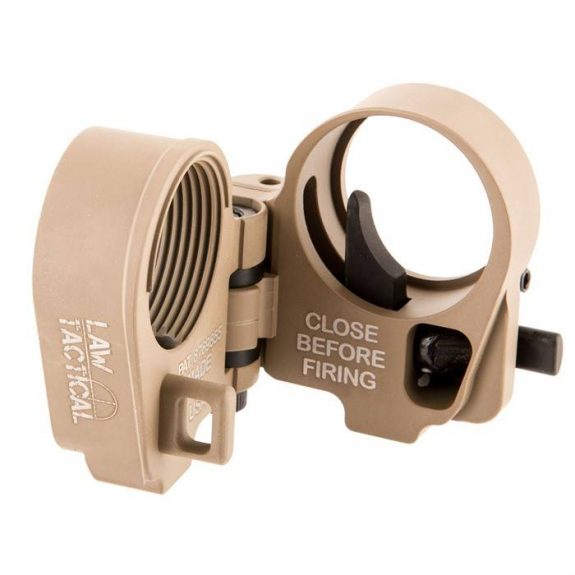 I have used my Gen 3 Folding Stock Adapter extensively and have really come to like it. They are great for making longer AR builds easier to transport and phenomenal on AR pistols.

The AR Folding Stock Adapter Gen 3-M from Law Tactical is starting to make its way back to dealer’s shelves. I am a big fan of these, having used a Gen 3 for well over a year now on one of my most used guns. The only problem has been their lack of availability. That is about to change now that Law Tactical has brought a new producer online to improve quality and increase output. 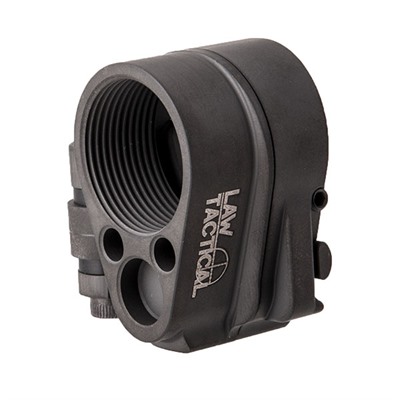 The new adapters that ship will actually be referred to as Gen 3-M. This should be the best version of the adapters yet. They build on the improvements to the Gen 3 version with a new Ionbond DLC finish and easier to read instructional markings.

The Law Tactical AR Folding Stock Adapter Gen 3-M is available now at Brownells or pre-order from our friends at F3 Tactical who will have their shipment of adapters any moment now. 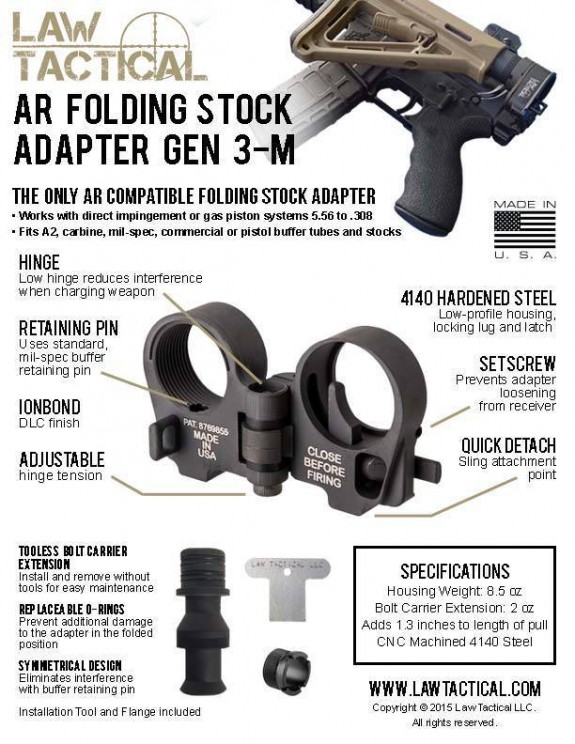 This is great news, especially for AR pistol shooters. Primary Weapon Systems (PWS) now offers the Law Tactical AR Folding Stock Adapter as an option on all their MK1 and Modern Musket rifles and pistols.

Check out all the available rifles and pistols at PWS. Email (customerservice@primaryweapons.com) or call (208-780-6122) for more information! 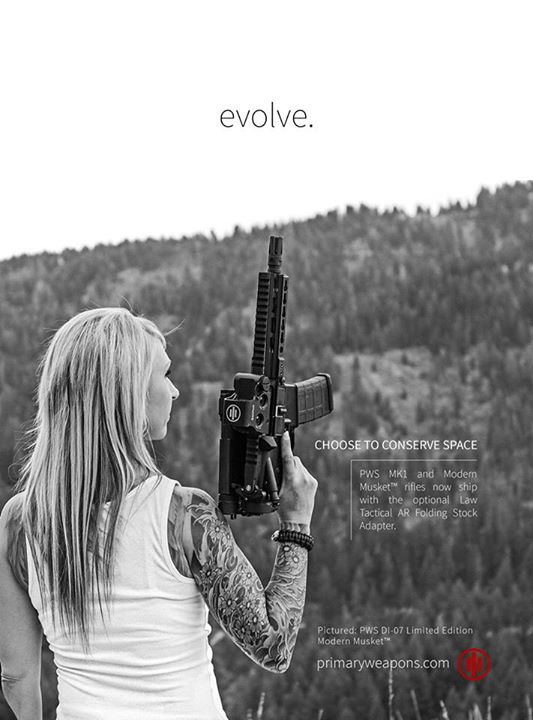 At this point, several reviews of Law Tactical’s AR Folding Stock Adapter Gen 3 (AFSA) have been written. I’ll give you the short version before launching into the crux of this article. It is beefier than ever. It is easy to install (read the instructions). It operates smoothly and had no effect on the reliability of the two host guns that I tried. It just works. 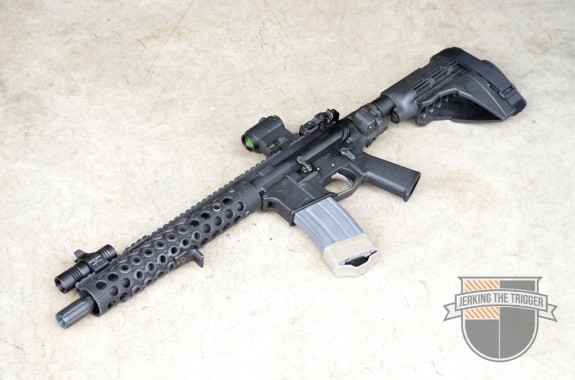 Now, on to what this article is really about… The AFSA makes sense for any carbine that you want to reduce the overall length for storage/transport/concealment purposes. It is great for making longer precision builds more discreetly storable. It is great for making short barreled rifles and PDR builds even more concealable. But, it really shines when used on an AR pistol.

The AR pistol is enjoying a massive increase in popularity. That popularity is the result of several factors like the extended wait times on NFA approvals that many experienced earlier this year, availability of quality AR pistol parts, strange concealed carry laws in some states, the prohibition of short barreled rifles in some states, and the introduction of the SB15 AR Pistol Brace. Many shooters have begun to see the utility of the AR pistol in a PDW-ish role. It is that PDW role and the unique considerations that come with shouldering an AR pistol that make the AFSA shine.

The AR Folding Stock Adapter makes your AR pistol long where you need it and short where you want it. 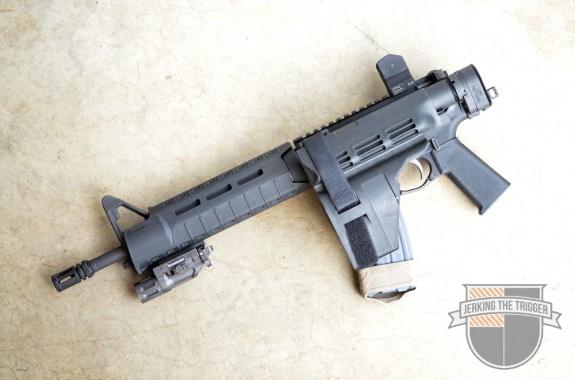 Long Where You Need It

In addition to the benefits of additional length of pull, that extra 1.5″ of OAL length can help ensure you reach 26″ overall so that you can use a vertical grip. You can read more about the rules surrounding vertical grips on pistols in JTT’s previous post on AR Pistol Misconceptions. 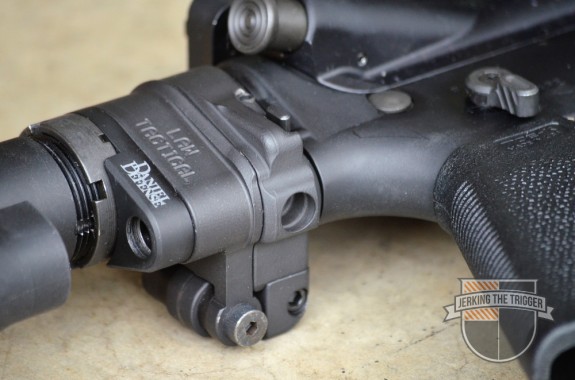 Short Where You Want It

Adding length is great from a shootability standpoint but if your intent was to put together a PDW type build, it is counterproductive since PDWs need to be as compact as possible while still being fast into action. You could split the AR pistol into its upper and lower receivers to make it more compact for storage and transport but that doesn’t meet the fast into action requirement.

Enter the AFSA. With the AFSA in the folded position, the AR pistol is less than 1″ longer than the upper alone. That means that you can keep your AR pistol assembled and have a package that is barely longer than if you broke it into its upper and lower components. The best part is, that the receiver extension can easily be swung into position while the pistol is coming to bear making it extremely fast into action.

I can’t say that the AFSA is necessary but it has strong benefits that mitigate a common AR pistol issue and enhance a potential use for the AR pistol. The Law Tactical AR Folding Stock Adapter just makes sense for AR pistol shooters. 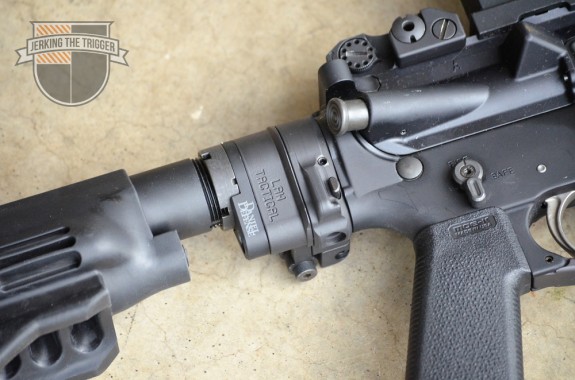 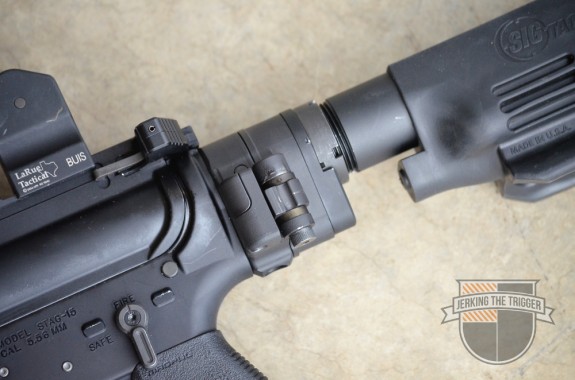 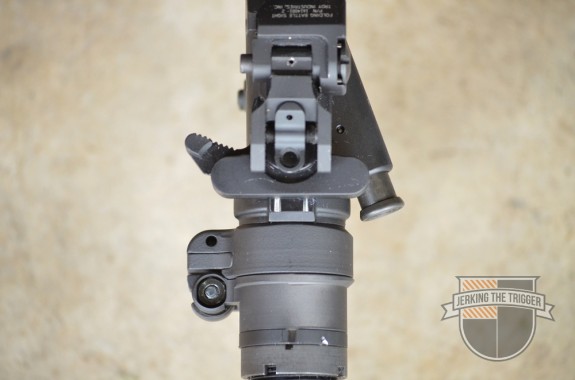