PHLster is bringing back their City Special hoslter – an AIWB holster designed specifically for carrying small frame revolvers. Their original City Special was one of the most forward thinking holsters available for compact wheelguns. The new version looks to build on that legacy with new features, support for a new gun, and PHLster’s advanced manufacturing methods. 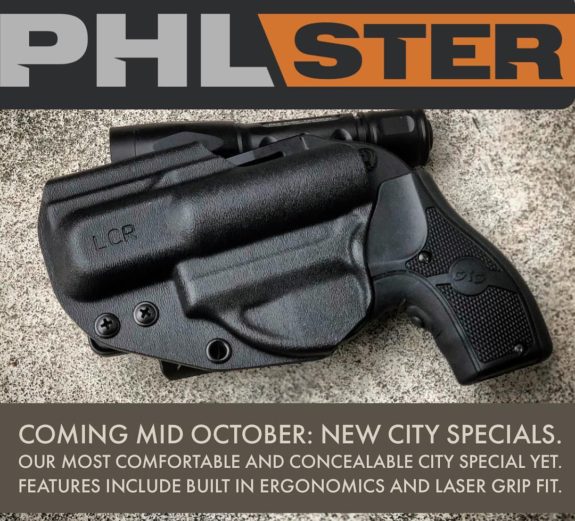 The City Special will be available in two versions for the Smith & Wesson J-Frames and, new for updated the City Special, the Ruger LCR. The holsters will support the snub configuration in all calibers for each revolver. All City Special holsters will be Crimson Trace Lasergrip compatible. Additionally, the holsters will feature subtle mold elements on the muzzle end that reduce hotspots and help prevent the feeling that the gun is tipping out away from the wearer.

Fans of the original PHLster City Special will remember the optional reload cut. I am happy to report that the cut will be standard on all new City Specials. This cut allows the user to wedge the revolver into the holster with the cylinder held open to facility a one handed reload. This was one of the most innovative features of the original City Special and it is nice to see it retained on the new version.

PHLster tells us they are aiming for a mid-October release for the new holster. It will be priced identically to the Classic ($74.99). Once released, the City Special will be a regular stock item with no lead time.

One Response to PHLster to Update City Special