Welcome to Bargain or Just Cheap? This series will review budget friendly knives in a short format. All of the knives will cost less than $50 (in most cases, much less) and will be purchased out of my own pocket. I’ll buy them, carry them, and use them in an attempt to determine if the knife is a bargain or just cheap.

I’ve been carrying and using a Kershaw Emerson CQC-4K mostly because I was able to purchase it for $15. The ultra-low price was my initial attraction to it. It is one of the lowest priced options in the already very budget friendly line of Emerson designed Kershaw produced knives. 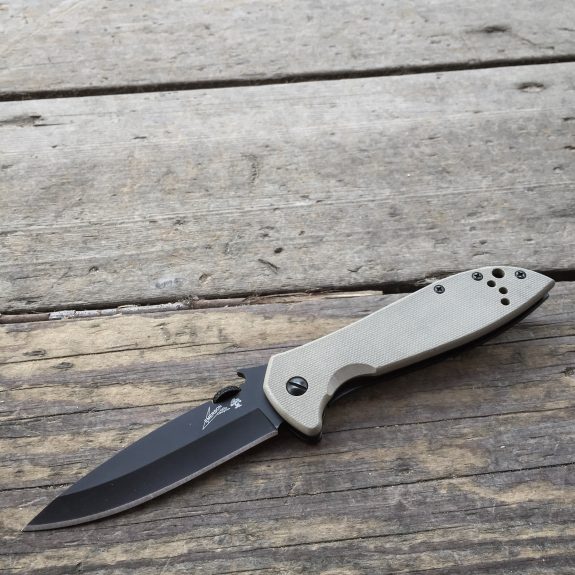 Pocket Clip: Reversible, Tip up only

There is a lot to like here. The size is great for EDC – plenty of blade for most EDC tasks, a long enough handle to support four fingers without crowding, and its very pocketable. The Emerson designed Wave Opening Feature works and is a great feature to have. The spear point blade has some belly, plenty of straight edge, and a useful point. The handle is comfortable in the hand. I find that it is also a good looking knife.

8Cr14MoV steel is a budget steel. It performs similarly to AUS-8. It is a stainless steel that sharpens easily. It lacks the edge holding ability of super steels but I find it completely acceptable. It is a solid, budget friendly steel and Kershaw seems to do well with it. 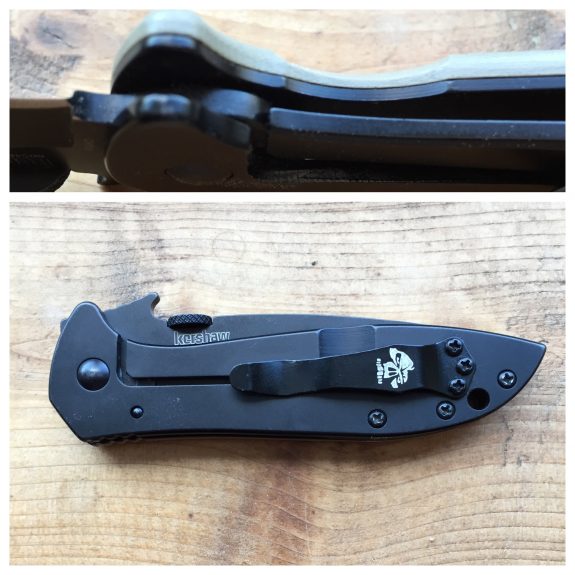 The lock on my example is very good. It locks up somewhat early so there is room for it to wear in and it does pass a spine whack test. The lock bar doesn’t stick and the detent is fairly strong and positive.

Unfortunately, there are some things about this knife that I don’t like. It is heavy for its size due to it’s thick 410 steel lock bar side and a full steel liner under the G-10 handle scale. The thumb disk doesn’t line up well with the relief cut in the handle making it difficult to access. Finally, the primary grind on this knife is a short, hollow grind that leaves the edge fairly thick. It cuts reasonably well but not as well as it could with a higher primary grind.

If you like Emerson Wave Openers like me, you won’t find a cheaper one, especially with real G-10 handle scales. Unfortunately, the strange spacial relationship between the relief cut in the handle and the thumb disk strikes me as an avoidable design flaw with a very noticeable impact on how easy you can open the knife.

This knife might be a bargain when it can be found around $15-$18 but other than that I’ll say… Just Cheap. If you are going to spend over $20, I would pass unless you are drawn to its smaller size in relation to other Kershaw Emerson models. I think there are better, but larger, options in the Kershaw Emerson line like the CQC-6K which I will review at a later date.

All of the knives for this series will be purchased by me on Amazon: Kershaw Emerson CQC-4K

Do you have a favorite affordable knife? Let us know about it in the comments!