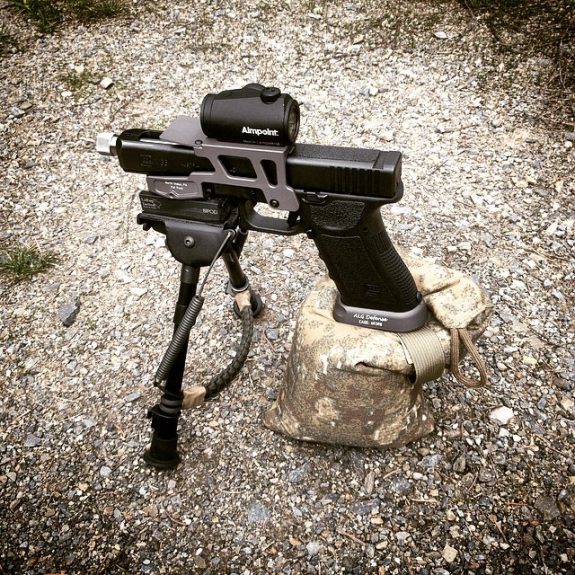 The email was thanking me for my AR-15 Pistol coverage over the years and it included a picture of the sender’s AR-15 Pistol. The 10.5″ 5.56 pistol, a mix of various budget parts, was topped off with a Leupold Mark AR 3-9×40… which is a lot of glass for a 10.5″ pistol. If the sender of this email was to post a picture of said AR-15 pistol online, he would most likely be greeted with a chorus of jeers and abuse. However, here is what they don’t know:

The sender is an accomplished long range shooter and hunter. He lives on acreage in the North West where he runs cattle. This particular AR pistol was purpose built to spend its days moving from his work truck, to his UTV, and occasionally other farm vehicles. That funny looking little AR fit the various compartments it needed to ride in perfectly and had already accounted for countless coyotes, gophers, and other undesirables around his ranch. He had dope worked out for it out to 600 yards which he admitted was a real stretch for the 10.5″ barrel and the cartridge. This was a working gun that was purpose built and that was already proven.

Dann at God, Gals, Guns, Grub could tell you about a farmer friend of his who keeps a similar AR pistol for similar reasons. We sometimes forget that our experiences may not be universal, our needs may not be similar, and what works for us, may not be useful to someone else. Next time you are looking at another man’s firearm and feel the need to lob a snide remark grenade over the internet wall of anonymity, stop and think for a minute… It could be that you just don’t fully understand the ways that firearm meets their needs or it could be that they need someone to come along side and help them learn.

If it’s stupid and works, is it really that stupid?

Note: The sender of the email outlined above asked that I not post the picture of his firearm… So, enjoy the picture of a Glock with a bipod on it instead. This is actually a way I tested the 50 yard accuracy of this set up for a review. It’s obviously not that practical.

4 Responses to If It’s Stupid and It Works, It’s Not Stupid