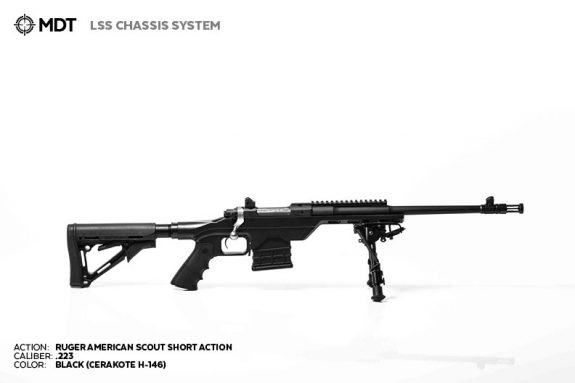 The LSS has the potential to correct two issues that can hold the Ruger American Rifle (RAR) back – the stock and the magazine. The Ruger American Rifles have the typical flimsy, plastic stocks found on budget rifles in this price range. The RAR gets away with it because of Ruger’s “V” block bedding design. They shoot well with the factory stock but shooters are seeing improvements in consistency by switching to the more rigid and truly free-floated LSS Chassis (according to the person who emailed me and several online reviews). These stocks also allow the RAR to accept AICS magazines instead of the standard RAR rotary magazines. This represents an improvement in quality and capacity.

Additional features include the ability to mount accessory rails for lights, lasers, bipods, etc. and the ability to accept AR-15 grips and buffer tubes for use with AR-15 stocks. The chassis is machined from 6061 aluminum and is relatively light weight compared to other chassis on the market. It is available with Black or Flat Dark Earth Cerakote finish and comes with everything necessary to mount the action. It does not include a magazine, grip, buffer tube, or stock.

The LSS is also available for a number of other actions including other budget options like the Savage Axis and Mossberg MVP. Check out the LSS from MDT.

4 Responses to MDT LSS Chassis for the Ruger American Rifle