Griffin Armament released all their official press today for the Low-Pro Rail Kit. You can see our previous post regarding this rail and read on for new details.

The design objective for the Griffin Low-Pro RIGID™ rails were to provide a slim, ultralight M-LOK rail, with increased rigidity over current similar market options.

“We had been looking at the market for a while and noticed that there were two types of rails essentially.  Rails that were beefy and strong, and rails that were slim and unfortunately weaker.  We wanted to combine the desirable attributes of both category products into one optimal rail system.”, Austin stated, Primary owner and Lead engineer for Griffin. He went on, “The final design resulted in 70% more rigidity than current similar market slim rails.  This is important for those who need to use IR lasers as armed professionals or for hunting.  There are a lot of great options now in IR laser aimer products that have solid mounting and solid bodies and we wanted to make a slim rail that provided industry leading point of aim / point of impact for those aimers.”

Low-Pro RIGID™ rails feature a 7075 aluminum barrel nut which can be installed with the included Griffin Armorers Wrench.  The mounting is done with included shims and flat head cap screws for an ultra-flush and low profile mating to the receiver.  17-4 stainless QD flush cups are included which thread into the barrel nut through holes in the rail.

The kits include the Griffin Primo Gas Block™, a 416R stainless .750” ID gas block which can be set screwed in place and / or pinned.

Additionally, the rail kits include the Griffin RAIL SHIELD™ panels as standard equipment.  This 4 piece kit provides a 4.6” length surface for heat protection and griping.  The user can choose to use the flat bottom panel or angled grip panel for enhanced recoil control.

This rail is a great value with everything included. Check out the Griffin Armament Low-Pro Rail Kit. 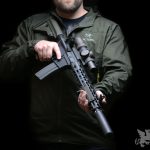 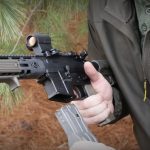 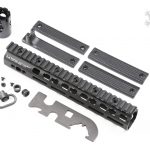