When a TacPack arrives on your doorstep and you know that box is going to have some cool stuff in it but you aren’t quite sure what it will be… That is exciting. I recently received TacPack’s April box and it was a good one. 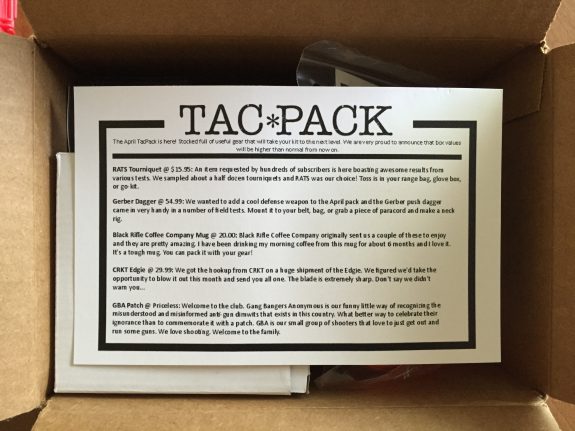 Before we get into the contents of the box, I should explain what TacPack is. TacPack is a subscription box service not unlike those found in other industries like fashion or cosmetics (fortunately, TacPack won’t send you makeup). You pay a subscription fee and then receive a box full of mystery items that are worth more than what you paid for the box. They deliver value by working out volume discounts and securing promotional items.

The April box delivered very good value and had some great items in it. TacPack’s boxes cost $49.95 each and the actual value varies based on what they were able to work out for that particular box. In the case of April’s box, it delivered a value of over $120 but that is at MSRP. Even shopping around for good prices, the box value well over the $49.95 cost. I have seen other TacPack boxes and it is my opinion that they are doing a good job of delivering value and that is probably the most important thing for services like this. 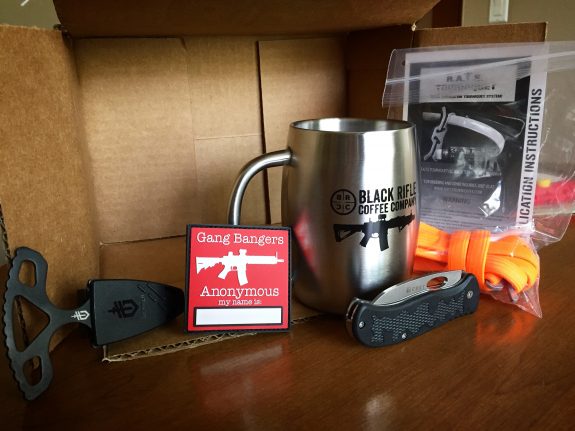 The April box included 5 items and, to me, none of them were throw-aways which is impressive. The items included:

RATS Tourniquet – I have a love hate relationship with the RATS. I like the form factor that lends itself to easy carry in a variety of methods. However, the testing shows that while it does stem bloodflow, it is not as effective as other TQs. In spite of that, I own a few of them because it is the type of tourniquet that can be carried in ways others cant which means I am more likely to have it with me. I think you can’t have too many TQs when you start distributing them between your kits so this safety orange RATS is an awesome addition to the box.

Gang Bangers Anonymous Patch – Everyone likes patches including me. This one is a lot of fun and it appears to be a well made PVC patch with great detail in the rendering of the AR-15 SBR. I dig it.

Black Rifle Coffee Company Mug – This mug is pretty darn nice. The handle is large enough to fit more than 2 man fingers through (seriously, why can’t mug makers do this more often). It’s made from stainless steel and insulated. It also happens to feature the logo of Black Rifle Coffee Company who you should definitely check out (I like the Just Black Coffee Blend because I am a pretty boring dude when it comes to coffee). Bottom line: This is a great mug from a great company and everyone can find a use for a good mug.

Gerber Uppercut Push Dagger – This Gerber Uppercut is not terrible. In fact, it is actually a pretty neat little self-defense knife except for the sheath which isn’t great. It is light, slim, sharp, and like any push dagger, very intuitive to use. I think push daggers are underappreciated. They can be carried comfortably and accessibly on the wearer’s center line with a short static line. They are very easily retained in the user’s grip. Finally, if you know how to punch, you know how to use it. If you want to, you can do a light cord wrap on the handle, have someone whip up a simple sheath for use with a static cord, and away you go.

CRKT Edgie – The Edgie is a weird little knife but a cool little knife. Its a slip joint (non-locking) folder that actually sharpens itself when you close the knife. It’s just the kind of knife you would want to drop into a kit somewhere. Mine is sitting on my workbench now because the sheepsfoot blade is great for utility work. This is a solid value.

Overall, I am really pleased with this box. The RATS TQ and the Black Rifle Coffee Company Mug are my favorites but I will use everything in the box. That isn’t really common with subscription service so I think TacPack deserves some kudos here.