December has come and gone and January is here. That can only mean one thing… It’s time for new User’s Choice Builds from Gunstruction.

Gunstruction’s User’s Choice Builds are comprised of the most popular parts from each category in their virtual AR building software. These builds reflect the parts that Gunstruction users selected most frequently for their virtual builds which makes it a interesting window into consumer trends… and there is always something interesting about these builds.

The most interesting thing in the December AR-15 User’s Choice Build is the inclusion of an EOTech sight in spite of their very public issues. It is also noteworthy that these builds always feature a Magpul grip. 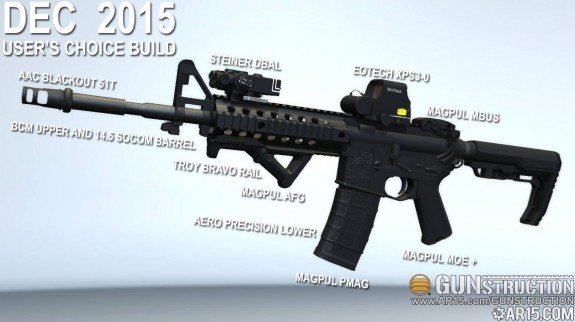 The December AR308 User’s Choice Build continues the trend of treating the rifle as a semi-auto precision tool rather than a more general purpose battle rifle.