I have been able to spend a significant amount of time shooting a Glock equipped with an ALG Defense 6 Second Mount. I have accounted for 1400 rounds through the setup with who knows how many dry fire repetitions on top of that. During that time of shooting, note taking, and research it has occurred to me that this will likely be a long review because there is much ground to cover. 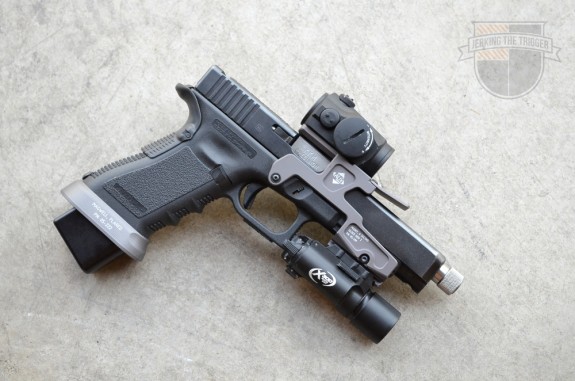 I will try not get bogged down in the overall concept of putting dot sights on handguns. One of the challenges with a review of the 6 Second Mount is that many of its benefits may also exist with other dot mounting configurations and so I must carefully draw out any specific advantages that this mount might possess over those other methods. This review will address the mount itself, the history of the concept and why this mount specifically exists, some observations from use, and attempt to flesh out whether or not it has any application for a regular guy like me.

The single piece design is machined from 6061-T6 aluminum. The 6 Second Mount (6SM) is attached to the host Glock via a replacement trigger pin that serves as a cross bolt and tight fitment at the accessory rail where it is also secured with a cross bolt. Installation is not difficult but the instructions should be followed carefully.

It should also be noted that the rear sight of the host Glock will need to be removed when using the 6SM as it interferes with removing the slide. The mount is designed to place the Aimpoint Micro as low as possible and there just isn’t room for the rear sight to pass under it during field stripping and assembly. 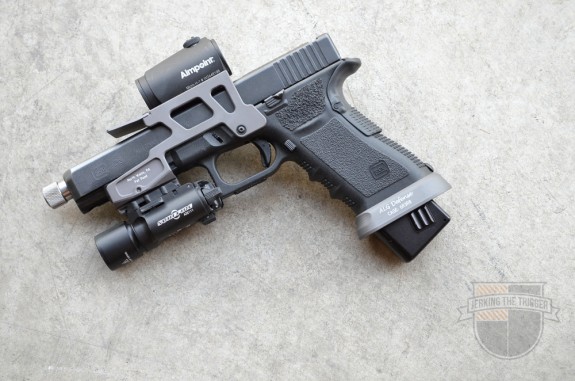 There has been a lot of confusion online about the 6 Second Mount. I think a lot of that comes from misunderstanding the history and context for this particular mount and mounts like it.

I can remember reading about handguns that used similar frame mounted structures to attach an Aimpoint and white light back in the earlier days of my firearm interest. In a particular case that I remember, they were designed for the first man on an entry team so that he would have a free hand to do things like turn a doorknob while still being able to operate a firearm in a more offensive manner. There are Ichiro Nagata photos of Mark Morris custom 2011s etched into my memory. Mr. Nagata himself worked with Mark Morris to create a handgun with a similar concept called the Black Widow.

I no longer have my stack of firearm magazines from my youth to reference but these setups were frequently profiled in American Handgunner and grew out of similar frame-mounted competition handgun configurations. They predated the Micro Aimpoints by a considerable amount of time. Some of them may date back to the days of the Aimpoint Comp M or even earlier. Suffice it to say, there has been a long history for this concept.

That brings us to just a few years ago when, according to ALG Defense, “a counter-terrorism unit approached ALG with a strict set of criteria. When entering a linear environment, such as an airplane or bus, the team’s primary weapon was their pistol and they were looking for a fast sighting method that was rugged and robust. Red dot scopes mounted directly to their pistol slides were showing a high failure rate due to extreme acceleration or deceleration of the slide. The balance of the pistols was thrown off from the rearward scope mounting position, and the slides were weakened from machining a pocket for the scopes into the top of the slide.”

So, this concept is certainly not without precedent and it has always served specific purposes for specific types or groups of people. This is not a concealment setup. It isn’t some kind of general-purpose firearm. It isn’t being pushed by ALG Defense as the handgun configuration of the future. It is simply a mount developed for a specific client with a specific need and it happens to be interesting, cool looking, functional, and refined enough to offer in the ALG Defense product line. 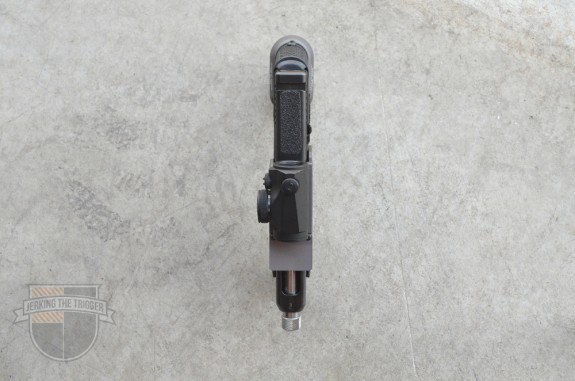 Context for the Regular Guy

We have established that the concepts behind the 6SM are not new and that the 6SM itself exists for a specific situation encountered by specific people but where does that leave guys like me? When I took on this review I figured it was my job to take all of that history and context into account while testing the 6SM to determine what usefulness it might have to regular guys who don’t work in counter-terrorism operations. I cannot speak to the counter-terrorism use of the 6SM but I can see strong parallels between the environments that this was designed for and the environments that a typical, civilian gun owner might face when using their firearm for defense of their home.

Ideally, when you hear that glass window in your living come crashing to the floor, you would shelter in place with your home defense firearm trained on your bedroom door while you call 911 to report the intruder. However, if you have loved ones in your other parts of your home, you lose the luxury of hunkering down behind your bed while looking over your sights. You must go to where your loved ones are to ensure their safety. Moving through a home can look an awful lot like moving through a “linear environment”. A compact weapon with a versatile sighting system and a white light is not a bad thing to have in such situations.

You may have to manipulate a doorknob along the way. You may have to operate a cell phone. You may need to place your hand on a child while still being able to identify threats and deliver accurate fire. A set up like the ALG Defense 6 Second Mount is perfect for such situations… but you could say that any handgun with red dot set up would work just as well, so why would you choose the 6SM? 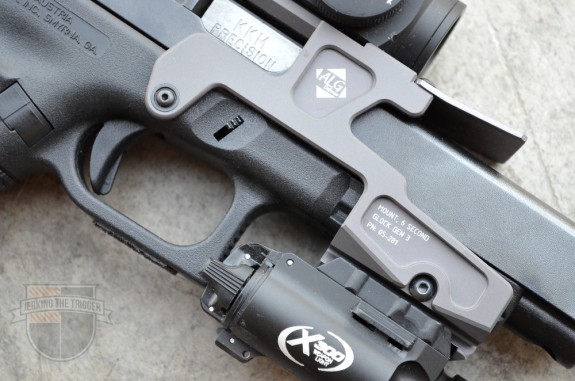 The 6SM offers a fixed mounting position that is not located on the slide. This is the basis for many of its benefits. First, the red dot sight does not need to endure that battering that it would take when mounted on the reciprocating slide of a handgun.

Second, it is easier to track a fixed aiming point through recoil than a reciprocating one. In this sense, I think the learning curve is shallower on this setup than a slide mounted setup. Most people aren’t really getting the most out of their handgun mounted dot sights because they haven’t developed the skills necessary to track the dot through recoil.

Another strong reason to consider the 6 Second Mount over a slide-mounted set up is that it requires no modifications to the host gun. If you decide you hate dot sights on handguns, or aren’t fully committed to the concept, or just have to sell the sight for some reason, the 6SM can be removed easily.

There are also a number of ancillary benefits that may factor into your decision in a less significant way. The 6SM has a very weight forward feel that helps soak up some recoil. There is a cutout on the side of the 6SM that falls directly under the shooter’s thumb and, when downward pressure is applied, can be used to control recoil much like the “gas pedals” found on competition guns.

There are, or course, things slide mounted dot sights do better. Chief among them is that slide mounted setups take up less space, which makes them viable for concealed carry.

Additionally, slide mounted set ups make manipulations easier, especially one handed manipulations where the dot sight itself can be pressed against a surface to operate the slide.

I mounted my 6 Second Mount on a Glock 35 with a KKM 9mm Conversion Barrel that has proven to be very reliable for me. This particular Glock 35 had about 2000 relatively trouble-free rounds of .40 S&W through it before I began using the KKM conversion barrel. There were a couple of malfunctions early in this guns life that appeared to be tied to weak ejection. These were fixed with a White Sound Defense HRED. It had just under 900 rounds of 9mm through it without a stoppage before the addition of the 6 Second Mount. Then it digested 1400+ stoppage free rounds during testing with the mount.

I did not see any issues with shifting zero throughout the testing. I zeroed at 10 yards the day I received the mount. It still hits point of aim, point of impact at 10 yards today.

It is very easy to shoot this set up quickly. The muzzle stays very flat if you do your part. That is likely due to the extra weight and the way you can press down with your support hand thumb on the mount to control muzzle rise. 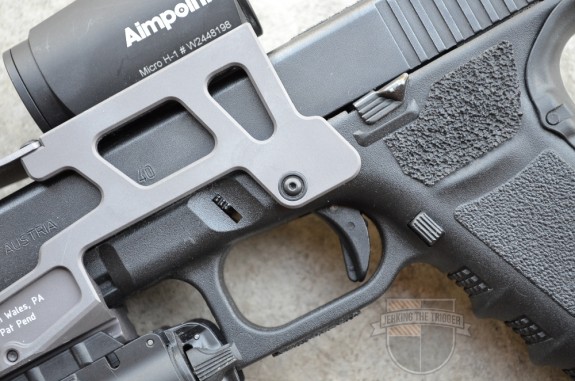 The accessory rail on the 6SM sits lower than the rail on the Glock. This can make reaching a light difficult for some shooters. I tested with a Surefire X300 and X300U, Streamlight TLR-1, and INFORCE APL. All were usable with my medium sized hands though the APL, with its large paddles, was easiest to use.

One-handed manipulations, as they are usually taught, are virtually impossible to do. One of the smaller, unobtrusive slide racker back plates made for Glocks might be a worthwhile addition to a set up like this. This would give the shooter something to press against their belt, holster, or any other surface in the event that they need to cycle the slide with only one good hand.

I think the ALG Defense 6 Second Mount does have application for the civilian gun owner as a very, very solid home defense weapon. I also believe that it has some attractive advantages over slide mounted red dots. It is exceedingly well made, has had zero impact on the reliability of my already reliable gun, and is just plain cool.

It may have been made for a counter-terrorism unit but it sure feels right at home on my nightstand.

Check out the 6 Second Mount at ALG Defense.