10/22 Takedown owners take note. Crusader Gear just released the bag that your 10/22 Takedown should have come with in the first place! 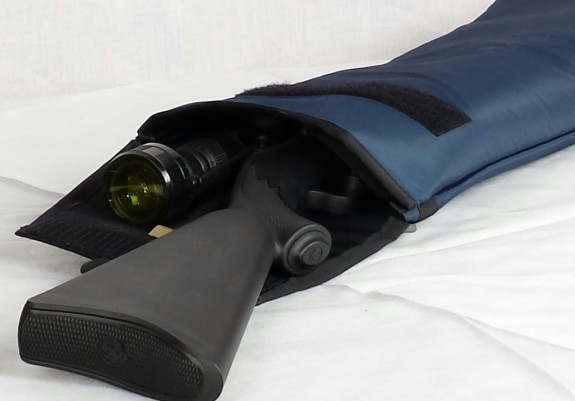 I am really glad to see this bag come to the market and I don’t even own a 10/22 Takedown (I will eventually). I contacted Crusader Gear months ago and asked if they ever considered making an improved bag for the 10/22 Takedown since they make so much 10/22 gear. Their response was “You mean like this?” It turns out they were already prototyping nearly exactly what I had in mind.

The bag has no external webbing, pockets, or Ruger billboard-sized logo so that it slides easily into another bag (like a hiking pack) and has a discreet appearance. It is lightly padded throughout to protect the rifle and optic… That’s right, it is sized to accept full sized optics if necessary. The back of the bag has provisions for attaching straps to created a backpack.

The bag is constructed from 400D Packcloth. All the internal seams are bound. The padding is thin closed cell foam and the flap style opening is secured with Velcro.

This looks to be huge improvement over the bag that ships with the 10/22 Takedown. Check out the 10/22 Take Down Bag at Crusader Gear.