I have put just under 1200 rounds through a Parallax Tactical PXTreme FFSSR Upper over the last year. That isn’t an epic round count but it was enough for me to make some judgments about the value of this upper. 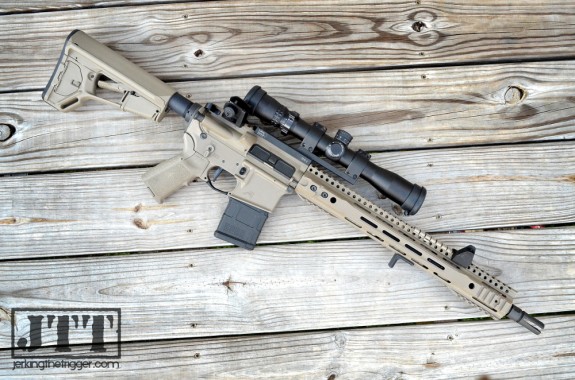 The PXTreme uppers are assembled by Parallax Tactical from a mix of their own in house parts and parts that they spec out to other manufacturers. I purchased one largely because of the combination of features and the affordable price ($699 for a complete upper now, $599 at the time of purchase).

The upper receiver itself is a standard forged upper with M4 feedramps. It comes standard with a BCM GUNFIGHTER Charging Handle and a PXT M-16 Bolt Carrier with an 8620 Steel MPI-tested Bolt. I opted to upgrade to a NiBX coated bolt and carrier.

PXTreme Uppers can be had with just about any flavor of Parallax Tactical rail. I went with the 15” FFSSR rail. FFSSR Keymod rails are also available.

The barrel is manufactured for Parallax Tactical by Black Hole Weaponry. There are a variety of barrel profiles available including lightweight, “RECCE”, and M4. I chose the RECCE profile which is basically a medium contour barrel with the following features:

The barrel is fitted with Parallax Tactical’s PXTreme Super Light Low Profile Gas Block. It is Melonite processed like the barrel. The muzzle is capped with a PXT Paracomp which is machined from 17-4 stainless steel and also Melonite processed.

Parallax Tactical does extensive work with CeraKote and they offer coating as an option on their uppers. This one was coated in Magpul FDE.

I cleaned this upper once and that was before I shot it. I wanted to punch the bore to make sure it was clean and clear for accuracy testing. It has been lubed properly but was never cleaned throughout the 1200 rounds test. I had a single double feed directly following the very first shot. That is the only stoppage or malfunction experienced in 1200 rounds using a mix of Black Hills Blue Box 75GR .223, Prvi Partisan 75GR .223, and Federal (Lake City) 62GR SS109. I think that qualifies as very reliable.

The gas port is on the large end of what I like to see on a mid-length but it is still within the normal range. I used this upper on a lower that was equipped with Vltor’s A5 System and it ejected everything to 4 o’clock consistently. It made nice little, easy-to-pick-up piles of brass. It was so consistent in its ejection that people on the range noticed and commented on the tight piles of brass that it threw. This is likely due to the A5 System as much as the upper but it is worth noting. 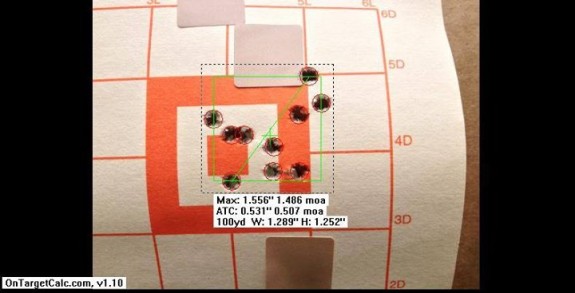 This 10 shot group is peculiar in that it doesn’t have a central cluster but it is typical of the accuracy I saw from this upper.

This 5 shot group was shot earlier in the testing. I almost always had a flyer or two. This was typical of multiple shooters. Note that both groups pictured showed flyers high and right.

This upper is solid and consistent in terms of accuracy. Eventually, I would like to try some hand loads or some more premium match ammo but Black Hills Blue Box 75GR .223 and Prvi Partisan Mach 75GR .223 both performed well. I topped the upper with a Nightforce 2.5-10X32 for accuracy testing.

Recoil was fairly mild – of course, it’s a 5.56 so… The A5 System and PXT Paracomp help quite a bit here. Without the A5, the recoil was noticeably sharper. I would like to see Parallax Tactical tighten up the gas port a bit because that would likely smooth out an already smooth shooting upper.

Overall, the fit and finish is very good. The CeraKote on my upper was a bit light on some of the corners of the FFSSR Rail and VERY small amounts of bare aluminum were showing through immediately. I suspect that Parallax Tactical would have made this right for me but I knew I would be wearing more of the coating off in no time at all so it didn’t bother me. Other than that, the machining is clean, the finishes are evenly applied, and obvious care went into the assembly. 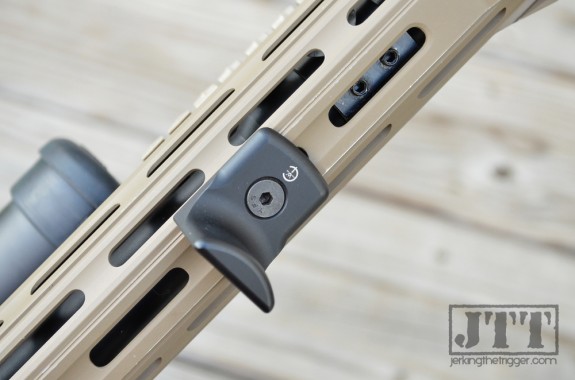 The FFSSR Rail is very nice. I went with the 15” and in retrospect, the 13” would have been plenty for this project. I liked it quite a bit for the various ways that I tested this upper. I was able to easily rail mount a bipod to the short forward rails and, when I was off the bipod, I found the non-railed portion to be very slim and easy to hold off hand. The slots and in FFSSR are designed to accept just about any direct connect accessory for the Magpul MOE Hand Guards. I mounted an IWC Weapon Control Mount-N-Slot.

The PXT Paracomp does its job. It has a fair amount of concussion and is flashy but almost every comp is. It is nice that it is stainless steel and Melonite processed like the barrel so there basically no reason to worry about corrosion… ever. I replaced the PXT Paracomp with a SEI Vortex, a muzzle device that is known to be very conducive to accuracy, during part of the testing. I saw no measurable change in accuracy and I think that speaks well of the Paracomp.

I should mention that the guys at Parallax Tactical were really helpful when throughout my order. They answered technical questions, gave advice, made suggestions, and even provided technical drawings to illustrate dimensions. I will definitely continue to shop with them.

I will grant you that a sample of one is an extremely small sample but these PXTreme FFSSR Uppers seem to be an excellent value considering the components and performance that you receive for the money. $699 buys you a complete upper with a better than average barrel, very nice free float rail, Melonite processing galore, and various other quality components. 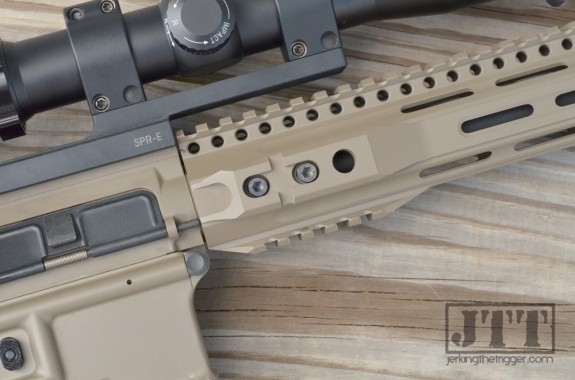