The ALG Defense EMR (Ergonomic Modular Rail) will redefine what you expect from a value priced, AR-15 free float hand guard. This rail is impressive by the numbers but they don’t tell the whole story. It’s even slimmer, lighter, and more affordable than you think! 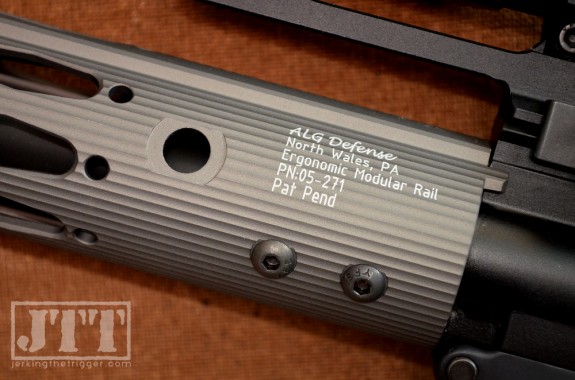 There are several slick sided, tube style free float rails on the market but the EMR takes the concept a step further by removing the top rail completely. There is only a low, rounded rib that runs the entire length of the rail in the place of the top rail.

The provided rail sections can be attached along the entire exterior surface of the rail including a short section of “Co-Witness Rail” that can be placed on the top rib to match the height of the upper receiver rail. 3 sections of rail are included (2×2” side rails, and 1×2” co-witness rail).

The EMR also comes everything necessary to mount the rail including an aluminum barrel nut, barrel nut shim kit, mounting screws, and a custom barrel nut wrench. It features a rotation limited QD sling swivel socket on the right and left side of the rail. 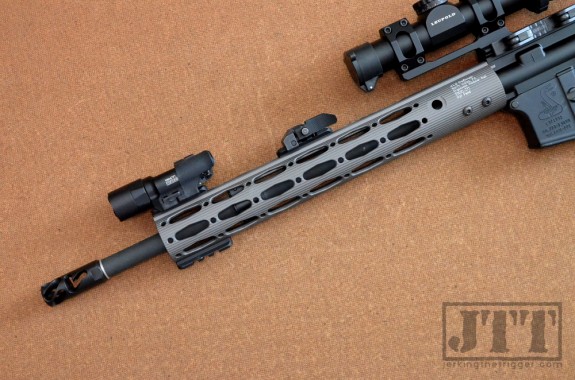 I was initially struck with the quality of the EMR. The tolerances between the rail and barrel nut are so sight that the rail makes a sort of sucking sound when it pulled off the barrel nut. It isn’t overly tight or hard to slide off, just perfectly mated. The included wrench fits the barrel nut perfectly. The surface texture is as easy on the eyes as it is on the hands. Every potentially sharp edge has been broken for comfort. The finish is smooth and even. The EMR basically just oozes quality and attention to detail in a way that you wouldn’t expect a rail that costs as little as $135 could. This isn’t a nice rail at this price. This is nice rail at any price.

The EMR feels great in the hand. The entire rail has a lightly ribbed texture that is surprisingly grippy when coupled with the matte anodized finish. I can’t find a single sharp edge. The top rib that stands in for a 12 o’clock rail makes this rail feel very slim in the hand and is ideal for those of you who like a thumb over grip. I find that I can grip this rail very aggressively with a thumb over grip without discomfort.

The outside diameter specs (1.75”) on the rail don’t tell the whole story of how slim it really is in the hand. Most rails have a top rail which is not included in the diameter measurement that manufacturers list. I own some very slim rails that let me wrap my hand around the rail so that my thumb and pinky finger touch – these are usually listed with an outside diameter of around 1.5” inches. When I do the same test with the EMR, I can actually overlap my thumb and pinky finger. The EMR’s lack of top rail makes it functionally, one of the slimmest rails on the market. 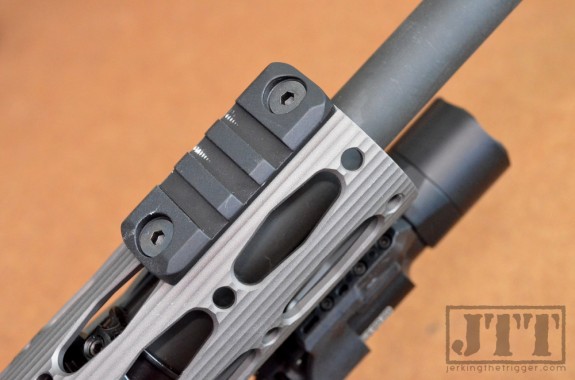 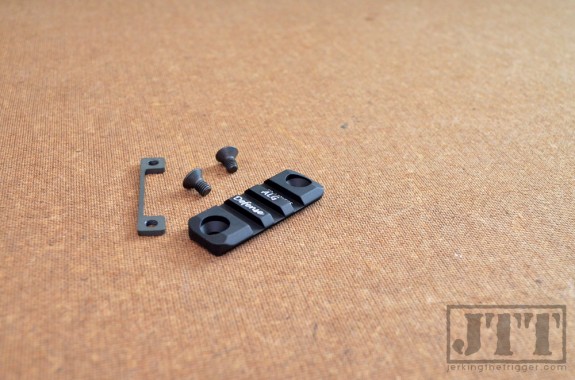 It also happens to be one of the lighter rails on the market. The 10” version weighs just 8.96 ounces. That is light but not jaw droppingly so. However, that number becomes much more impressive when you realize it includes the barrel nut and integrated right and left side sling mounts! Those integrated sling mounts save weight and money down stream.

The EMR is the easiest to install free-float rail with a proprietary barrel nut that I have ever used thanks to the included wrench and color-coded shim kit. The wrench has several witness marks on it that, when used in the manner prescribed in the instructions, tell you exactly which shim combination to use.

I took a few moments to read the instructions (clip a corner off my man card) and then proceeded to install the rail with my bare hands without the aid of a vice (put that corner back on my man card!). I am not saying that every rail will install as easily as mine did or that you should even try to do it without a vice, but I was able to do it.

The rail sections are easy to install and uninstall. It is easiest to install them when the tube is removed from the carbine but it is doable with the tube installed. The included backing plates are clever in a simple kind of way. They are one piece so both rail mounting screws go into the same backing plate. They are also skeletonized aggressively to reduce weight and potential interference with barrel parts.

My only issues with the EMR centered around the co-witness rails. The first issue that I faced was that I wanted to have both a 12 o’clock mounted light and a front sight. The included rails are too short to accommodate both. It is tempting to say ALG Defense should make a longer co-witness rail available but that would trample the great, top-rail-free ergonomics of the EMR. I just begged ALG Defense to sell me an additional co-witness rail until they tired of me and relented. Problem solved. It would be nice if the rail sections were offered on their website as accessories.

EDIT: Never let it be said that ALG Defense doesn’t listen to customers. The rail sections are now available separately on their website! 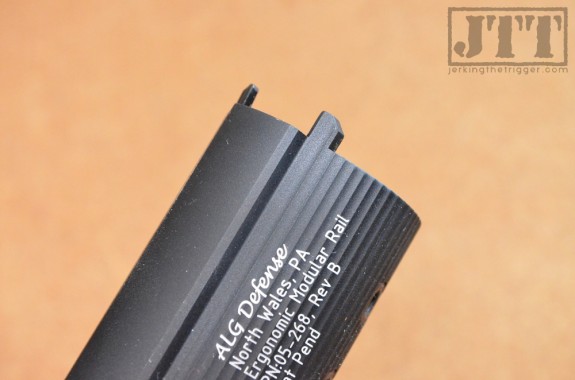 The other issue that I had was that the co-witness rail backing panel contacted my low profile gas block. It turns out that the particular gas block I was using was not as low profile as I thought. This was solved by switching to a Geissele Automatics Low-Profile Super Gas Block. I suspect that most low profile blocks will work but just keep in mind that there may not be a lot of interior space between the gas block and rail backer if you want to attach a rail directly over the gas block. I certainly can’t hold incompatibility with one of the larger low profile gas blocks against the EMR.

I don’t have any way to quantify it but the EMR feels more rigid than most slick-sided rails. It feels more like a quad rail in how rigid it is. I am not an engineer but I suspect that is due to one piece extrusion construction of the tube, the very long barrel nut, and the tight fit between the nut and the tube. The tube mounts to the barrel nut via 6 screws arranged in two rings of three screws. The two rings are able to be spaced fairly far apart thanks to the length of the barrel nut which I suspect adds to the rigidity of the entire system. 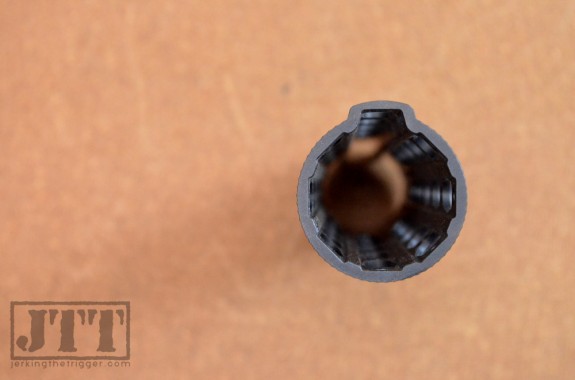 The numbers simply don’t tell the whole story when it comes to the EMR. The quality and design is better than the price would indicate. It is functionally slimmer than rails with smaller outside diameters on paper. The weight is more impressive than it appears at first glance since it includes the barrel nut and sling mounts. By the numbers alone, this is a great rail for the money. When you actually put hands on one, I think you’ll agree that the EMR isn’t just a great rail for the money… It’s just a great rail.

Check out the EMR at ALG Defense. 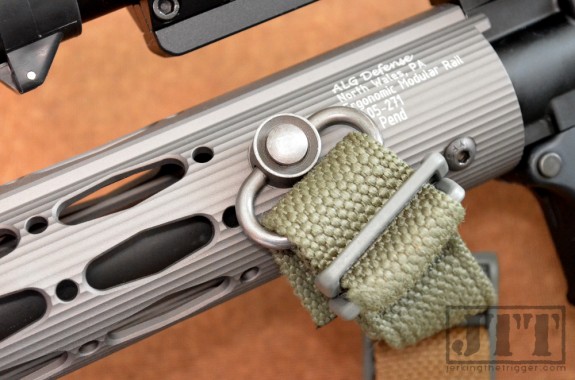 AR15News.com Give Me Back My Country Shirt
RE Factor Tactical – New ASO Bag Colors