The Single Chamber Brake or SCB is the first muzzle device offered by ALG Defense, a company well known as Geissele Automatics’ value minded sister company. On paper, it would seem to deliver a lot of muzzle device for the money but does it perform? 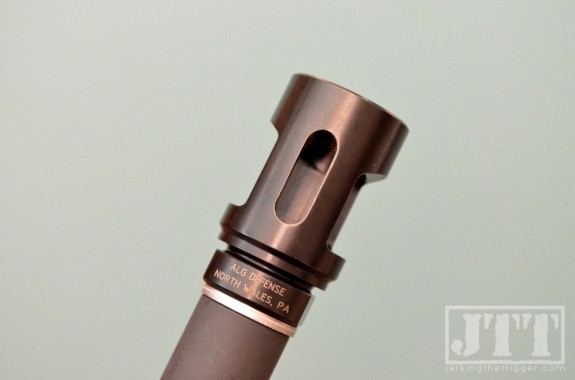 The SCB’s name tells you a lot about it. It is a muzzle brake with a single expansion chamber. It has two massive side ports to reduce recoil and a large top port to help mitigate muzzle rise.

It is machined from 4140 steel and black nitride processed which is impressive for a device that costs just $35. I don’t often think much about the fit and finish of a muzzle device but the quality of the machining and finish stands out on the SCB. 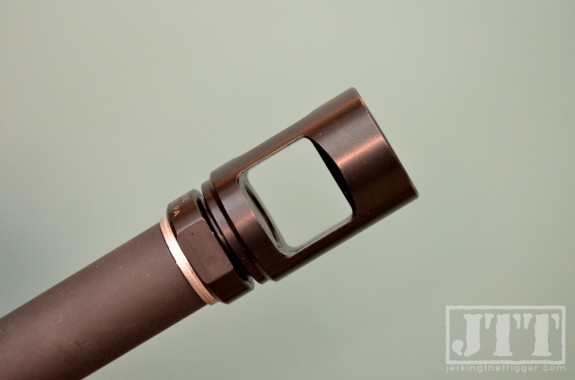 Let’s just get this out of the way up front… When it comes to muzzle devices, there is a lot of talk about concussive blast and how to reduce it so the brake is better suited to “operational” use. Do not be confused. This is a straight up muzzle brake that makes no apologies for being a muzzle brake. It will remind you of that every time you pull the trigger if you happen to forget. If you are adjacent to the SCB when the hammer drops, you can feel the concussion in your chest and you get the sensation of wave washing over your exposed skin.

That healthy concussive blast comes with quite a bit of muzzle control. Recoil is noticeably reduced though it is always difficult to quantify how much it is reduced. It also adds a measure of recoil control which I found to be surprisingly neutral given the large top port. There is some downward push for sure but it just wasn’t much as I was expecting given the design of the brake. 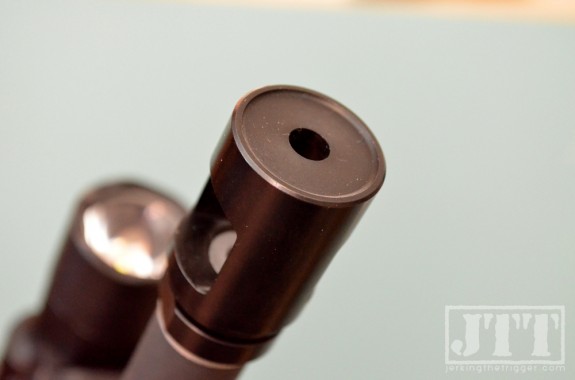 The downward push present with the SCB was not enough that it presented a significant obstacle for me to overcome in between shots. However, one shooter that I asked to try it who is excellent at controlling muzzle rise via technique thought it pushed too much for his liking. Two other shooters who tried it, mirrored my experience. They noted some downward push but thought the controllability was in line with other brakes that cost significantly more. Overall, everyone was very impressed. 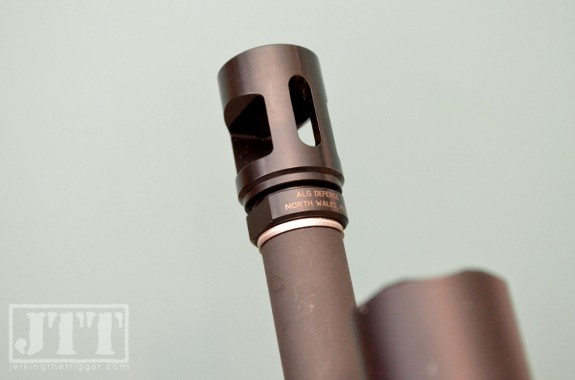 The SCB is an unapologetic muzzle brake. It holds no illusions of reduced concussive blast and wouldn’t be my first choice for a carbine that may need to be used in confined spaces. However, it offers finish, features, and function beyond what you would expect for $35. The SCB would be right at home on a competition AR-15 build.

Yes, nearly all the experienced shooters who tried it noted some downward push but the degree of the push varied by the shooter. I would prefer that no downward push was present but there aren’t many devices that manage to achieve that. I found the SCB to be very manageable and the shot timer showed faster splits versus a Vortex flash suppressor.

In a market flush with muzzle brakes, the SCB stands out for the performance it offers at a low price point. It is a good value at twice this price. If you are looking for a muzzle brake, it is hard to see how you could justify spending more.

Check out the SCB at ALG Defense.