LaRue Tactical is now in the trigger game. Their new MBT-2S Trigger is machined from S7 Tool Steel plates. This 2 stage trigger has a 4.5# total pull weight with a 2.5# first stage and 2# second stage. It’s trigger bow has a traditional curve but is also broad and fairly square which precision shooters will likely appreciate. 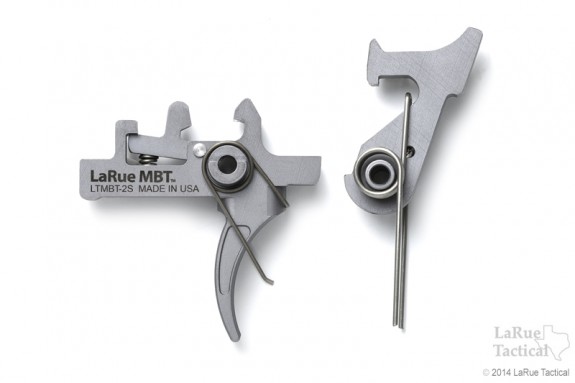 Users of the Surefire Scout Series of WeaponLights have never had many great choices in offset mounts. I have written previously about the Danger Close Consulting Scout Mount and the Gear Sector Scout Mount. Now LaRue has introduced the LT752 Offset QD Mount for Surefire Scout WeaponLights. Each of these three options have their own three unique strengths. The LT752 brings the excellent LaRue QD system to the table.

Check out the LT752 on the LaRue website where it is available as a mount only or as a package with the M300 or M600.

The LaRue Tactical R.I.S.R. is a new and interesting approach to an old problem. The charging handle of the AR family of rifles runs along the top of the stock when it is extended. If a user of one of these rifles wants to install some kind of comb riser to their rifle they needed to install it close to butt of a fixed stock or run an adjustable in the last position. If it is installed too close to the receiver it will interfere with the function of the charging handle which is obviously unacceptable.

The R.I.S.R. is designed to slide with the charging handle. It bolts onto the Magpul CTR or MOE stock and allows the stock to be put in a variety of positions without interfering with the charging handle. The folks at LaRue claim that the R.I.S.R. was built with the worst case scenario in mind and they have tested it with sand, dust, dirt, and more without being able to make it seize.

A product like this is especially needed on the LaRue Tactical OBR. The OBR has elevation built into the receiver rail which can cause optics to sit quite high. Until now, OBR users were stuck with comb risers on fixed stocks or on collapsible stock in the fully open position. The R.I.S.R. should give them some much needed options.

I can remember the excitement surrounding the release LaRue Tactical OBR (called the OSR at the time). The OBR was built to take the SR-25 pattern magazine which was a very good thing considering that Magpul had announced that they would be a making a 20 round 7.62 PMAG that fit rifles designed to take the SR-25 magazine. However, the release of the 7.62 PMAG was delayed and LaRue was left without a source of consistent magazines to feed the OBR.

So what does a company like LaRue do when they need a quality magazine? They design and build their own with a healthy portion of innovation and LaRue quality.

The LaRue 7.62 magazines feature a high visibility red anti-tilt follower. The follower is designed to maintain the optimal angle to feed the cartridge into the chamber. The body of the magazine has two notable innovations. The first is a feed lip design that is shaped to reduce drag on the cartridge as it feeds into the chamber. The second is a hidden laser weld on the rear of the magazine. Locating the weld here increases the available room at the front of the magazine for accommodating rounds with longer overall lengths. The magazine also has a friction reducing coating that aids in function and eases cleanup.

This is a very well designed magazine that was previously only available with the purchase of an OBR. Soon, they will be available for purchase separately.

You can watch the LaRue Tactical website for more details on pricing and availability.

LaRue has been making lower 1/3rd mounts for the Aimpoint Micros for several years now but they only recently unveiled the LT751 mount which allows for an absolute cowitness. It also features an innovate pedestal design that increase the field of view around the optic and keeps weight to an absolute minimum.

This has all the marks of another great mount from LaRue Tactical.