The new Dump Mag Insert from Arbor Arms helps you optimize the space on your battle belt:

The design takes advantage of the existing flap stow channel while still allowing the Dump pouch to be stowed when not in use or when reducing potential snag hazards is a priority. The Dumpmag Insert is compatible with both AR15 and AR10/SR25/M110 magazines. when not in use the insert goes flat against the belt and the shock cord mag retainer can be stowed in the channel out of the way.

This simple addition allows you to add an additional magazine when the mission dictates or have the ability to add a rifle mag if you do not usually run a rifle mag on your Belt Kit.

Get yours today at ArborArmsUSA.com!

Arbor Arms just introduced the Ambush Belt and it has a very clever trick. It is fully MOLLE compatible… while also being thin enough (.2″) to pass through the belt hardware of a duty holster!

The AMBUSH BELT™ is a minimalist MOLLE belt that is very lightweight, extremely low-profile but still stiff enough to support a fighting load. The AMBUSH BELT™ was designed for users that require the lowest profile system possible but still desire the stiffness and stability of a layered belt system. The AMBUSH BELT™ is the thinnest MOLLE belt on the market at just under .200 inches thick, and at the incredibly low weight of 6.2 oz*. The AMBUSH BELT™ also features our Double Reduction Cinch System that allows the belt to be tightened easily while worn for perfect stability and comfort.  The AMBUSH BELT™ features our innovative “Half MOLLE” design that allows additional modularity and customization of the belt configuration while still remaining extremely durable thanks to its Laser cut laminated construction.

The Minuteman Plate Carrier is an affordable plate carrier with a dash of Arbor Arms innovation and quality. It features a full laser-cut PALS panel on the front with loop Velcro for securing items like ID, patches, placards, and chest rigs. The rear plate bag is slick with loop Velcro at the top.

The Minuteman Plate Carrier comes with a simple webbing cummerbund on its most affordable iteration. However, the user can select from a number of upgraded cummerbunds at the point of purchase.

Safariland’s UBL holster adapters are extremely handy. They drop the holster just enough to provide clearance for gear like body armor while not placing the holster too far down the wearer’s leg. The only problem is that this dropping the holster below the belt can allow the holster to rotate or move during the draw stroke which can cause binding. 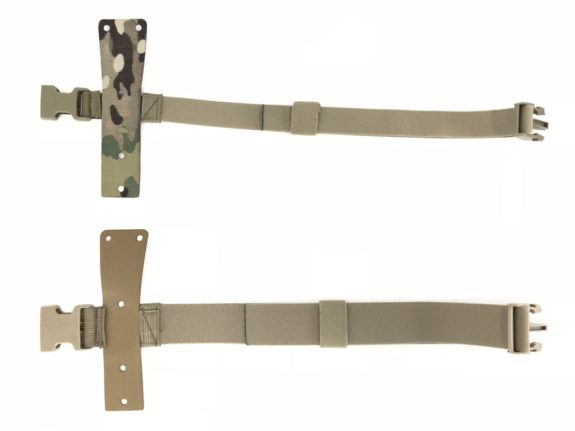 The Safariland Holster Single Leg Strap Adapter from Arbor Arms seeks to fix the binding issue by securing the holster to the wearer’s leg so that it can’t tilt away from the wearer. The adapter works in conjunction with the Safariland UBL 6070 series drops and includes a laser cut laminated nylon aramid backed material panel and a strap. The panel bolts between the holster and UBL drop and can accept either 1″ or 1.5″ straps. It is available with either or both strap sizes.

Single strap setups have frequently be improvised with UBL drop adapters by simply sandwiching a strap between the holster body and UBL. This works but places the strap higher on the holster which places it a steeper angle as it wraps around the wearer’s leg and can lead to discomfort. The Arbor Arms USA Safariland Holster Single Leg Strap Adapter places the strap lower which could be more comfortable. 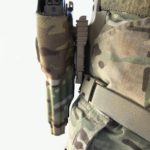 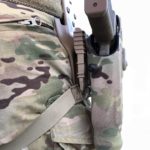 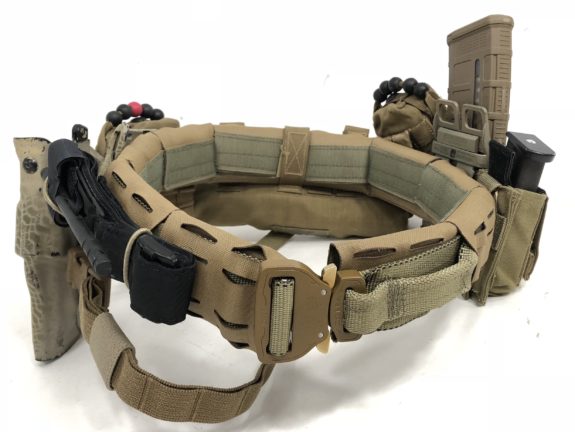 The Keeper belt can be worn as the base of the SALT Belt System or alone as an EDC belt.   The Keeper is attached via an adjustable G-Hook in a tailless configuration allowing for both gross and fine adjustment in size when transitioning from IWB carry to battle belt.  There are 6″ of movement in the gross adjustment/connection section and 4″ of movement in the fine adjustment section.  The steel G-hook can also be replaced with a split ladder lock to make the belt non metallic.  It is constructed of type 13 webbing with an 1.5″ strip of loop sewn on with channels to hold up to four 3/8″ zip ties.  This loop is also the matting surface for the Sleeve.

The Sleeve  is less than 2-1/4″ tall and less than 7/8″ thick but still boast; Squadron@ construction, 1.5″ hook Velcro strip for matting to the keeper belt, 3/8″ of foam padding, 2″x.060″ HDPE stiffener,  2 MOLLE rows , and 1-3/4″ web belt attachment.   But what makes this truly unique is that every 2 MOLLE columns are cut in to tabs that wrap around the Core Cobra belt allowing you to “Unwrap” MOLLE pouches and allow the removal of web belt attached items like water wings and holsters WITH OUT restringing the entire Core Cobra belt.

The Core Cobra belt can be used by itsself or with the Sleeve. It is built from a continuous piece of type 13 webbing ( break strength of 7,000 lbs) and an AustriAlpin Cobra Buckle (break strength of 18kN) We fold and sew a segment of the webbing down to 1″ which allows  us to use a 1″ fixed  buckle and create a soft loop for attaching carbines, safety lanyards, and slings.  This configuration allows the Core Cobra belt to be strung through pants belt loops and the belt loops on many accessory pouches.

You can check out the new belt at ArborArmsUSA.com.