The MERC is a revolutionary improvement to handguards for the AK platform (PATENT PENDING). The MERC offers rock solid optics mounting and hand protection, lowering the handguard temperature by over 100°F after five magazines. Gloves are no longer required equipment for extended fire rates when deploying the MERC. The MERC is easily installed in less than 30 minutes with commonly available tools.

The system builds upon the knowledge gained from the Occam Defense RST (Rear Sight Tower)- The MERC builds on the popular press-fit part by adding clamping for user installation along with a thermally managed aluminum handguard.

The Most Combat Effective Handguard Solution Occam Defense’s MERC increases the combat effectiveness of AK rifles by adding a rugged, thermally managed handguard and optics mount in a user-installable configuration. Extended length handguards have long been available for the AR platform. They have obvious benefits for ergonomics– taking a long grip forms a strong triangular base, useful both at distance for accuracy and for weapons retention in CQB environments when hostiles may gain access to the muzzle of one’s weapon. They are also required for mounting modern force multipliers– lights, lasers, IR illuminators, etc.

However, the mounting methods used for previous extended guards were less than optimal. They pulled unacceptable amounts of heat from the barrel and deposited in the worst place possible–the operator’s hand! Occam’s Patent-Pending MERC solves this problem by anchoring the guard far back on the barrel at a single, cool, point, and uses heat shield technology to reflect heat away from the handguard. In field tests, the Occam Defense was over 100°F cooler than the nearest competitor. Maximum Effectiveness – Reduced Complexity: The MERC is the New Standard for AK Handguards.

Visit OccamDefense.us to learn more about installation, which AKs the MERC will fit, and to pre-order. 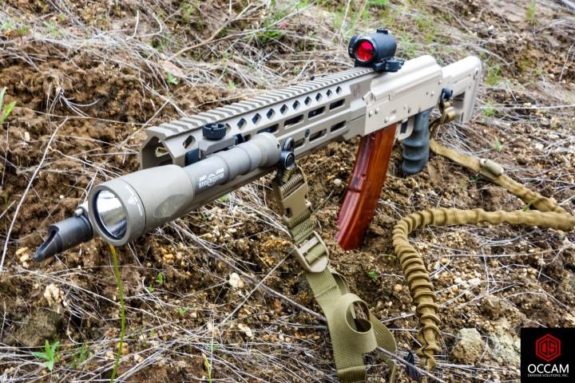