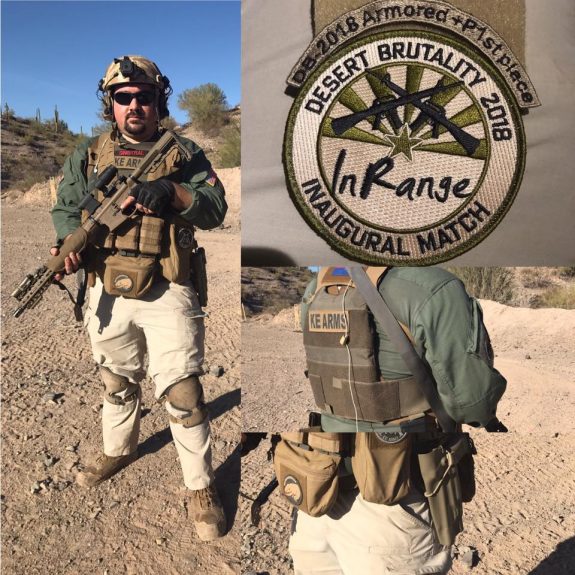 The Desert Brutality 2 Gun Competition was held at the Cow Town Range in Peoria, AZ  February 3-4 2018.  The match was organized and promoted by InRange TV.  InRange TV’s Karl Kasarda brought his unique combination of physical and shooting challenges with rifle and pistol from the 2 Gun Action Challenge Match into a major event format.

105 competitors from around the United States and as far as Switzerland and Finland attended the event.  Participants included active and retired Military/Law Enforcement, experienced action shooting competitors, and a large number of new shooters inspired to compete by InRange TV’s match coverage.

Competitors engaged rifle targets from out to 300 yards, and pistol targets to 25 yards.  Every stage included some physical challenge including sprints, running up hill, throwing a kettle bell, dragging a heavy sled, obstacles, and breaching doors.

Classic: Firearms designed in as issued configured prior to 1974 with iron sights.  Mag capacity was limited to 30 rounds rifle, and pistol to standard capacity magazines.

Scout: Modern firearms.  Rifle could have a single optical sight, pistol must use iron sights.  Rifle capacity was limited to 30, and pistol to standard capacity magazines

Armored: Same as Scout, but add a plate carrier with rifle rated plates must be worn on every stage.

Armored +P: Rifle Rated plates front and rear, bump or ballistic helmet, all ammo for the entire match carried on person throughout each stage.  Firearms equipment and accessories were unlimited as long as it was carried.

You can watch Russell’s match videos on youtube here: