B.E. Meyers & Co., Inc. is pleased to announce that the MAWL-DA has been selected by the French National Gendarmerie’s elite police tactical unit, the GIGN, as their official individual NIR/VIS weapon laser and illuminator. The GIGN is currently upgrading legacy systems, and has begun to integrate new technologies with the unit’s available weapons platforms.

After evaluating various laser aiming and illumination systems through rigorous testing, and in real-world scenarios, the MAWL-DA was proven to be the superior solution, and was selected for formal procurement and deployment within the unit. In addition to the MAWL-DA’s selection by the GIGN, other units in France, and other European SOF units have adopted it for use in their respective operations. 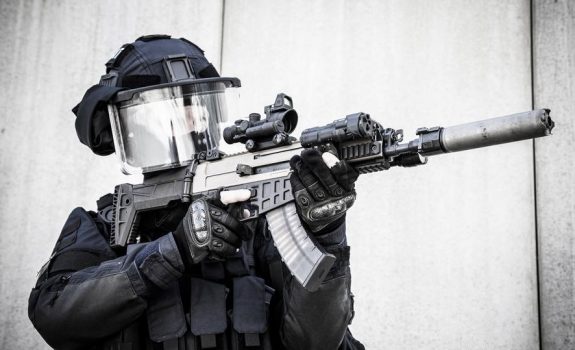 The GIGN is the elite Police Tactical Unit of the French National Gendarmerie. Its missions include counter-terrorism, hostage rescue, surveillance of national threats, protection of government officials, and targeting organized crime. It is renowned for its selection and implementation of innovative technology and tactics, using a comprehensive suite of both small arms solutions, and weapon enabling systems. The unit’s selection of the MAWL-DA as a tool for mission success is notable in light of the GIGN’s pedigree, and reputation as a premiere SOF unit. B.E. Meyers & Co. looks forward to the MAWL-DA’s service with the GIGN as NIR/VIS pointing and illumination system which will assist in the unit’s response to both domestic and international threats.

The MAWL-DA (Modular Advanced Weapon Laser – Direct Action) is a high-power infrared and visible green aiming and illumination laser for individual carbines. Offering improved ergonomics, interface, and performance, the MAWL-DA has been designed from the ground up around the needs of the modern night fighter.

Engineered to address the shortcomings of common laser devices in use with both military and law enforcement, the MAWL® incorporates cutting edge VCSEL technology which eliminates the current problem of inconsistent and granular, speckled illumination. This unparalleled beam quality is leveraged with multiple modes of divergence and power, based on the ideal settings for any operational environment: Close Range, Mid Range, or Long Range.

One Response to B.E. Meyers MAWL now in use with GIGN