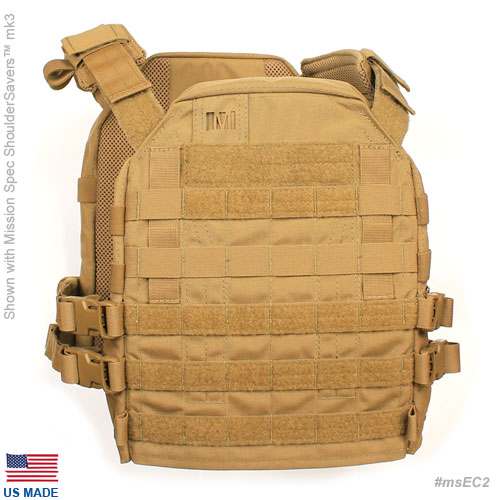 Mission Spec has released their second generation of the Essentials Plate Carrier as the Essentials Carrier 2 (EC2).  This new version shares the ultra-light profile of its predecessor, the EOC.  Weighing in at only 24.9 ounces and constructed from 1000D CORDURA (500D for MultiCam; Black, Arid, Tropic).

All of the great features of the EOC carry over to the new model. Abilities such as the independent height adjustment of the rear plate bag.  A full uninterrupted PALS grid. Moisture wicking spacer mesh against the user’s body.

The EC2 is fully compatible with other Mission Spec products such as the FlankSavers, ShoulderSavers (all versions), and other future products.  Inserted armor (not included) is always kept at the highest possible position inside of the plate bags due to the EC2’s armor suspension system.  Just like the EOC, all armor weight bypasses the CORDURA layer and is loaded directly onto the internal webbing structure.

The ShoulderSavers have also received improvements with the mk3 version and are available alongside the EC2.  Improved cable and hydration management along with other tweaks make the ShoulderSavers much more useful to the user.  The ShoulderSavers mk3 can be used with many other plate carriers as long as the shoulder straps are equal to or less than 2” in width.

Both items are available in the entire line of standard colors and patterns offered by Mission Spec.  Custom colors and patterns along with other customizations are possible on a case by case basis. Contact Mission Spec if these services are needed. The EC2 and ShoulderSavers mk3 are 100% designed, tested, and manufactured in the United States with US sourced components and are Berry Compliant.