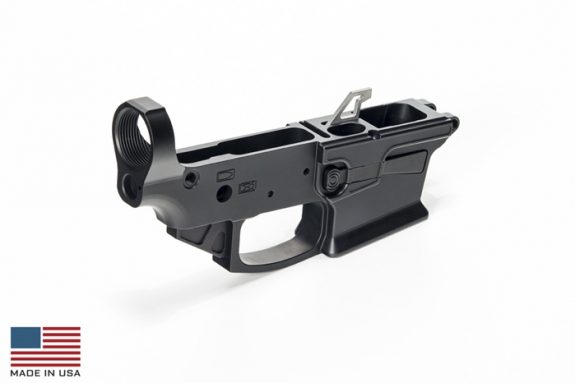 This lower features an Ambidextrous magazine catch assembly making it optimal for Left Handed shooters or shooters that need complete ambidextrous handling of their firearm.

The KE-9 accepts Glock OEM and after market Glock style magazines. The magazine catch is included and is machined from aluminum billet and hard coat anodized. The ejector is included and is secured with 2 set screws. The bolt catch hole is threaded and and screw for installation is included.

The KE-9 DOES NOT have Last Round Bolt Hold Open (LRBHO) unless you use an upper with a linkage system built in to accomodate it. The AR15 magazine catch can be used to manually lock the bolt back, but Glock magazine followers DO NOT interface with it. To have LRBHO you muse use an upper with a linkage system that interfaces with the Glock magazine follower and standard bolt catch. Some manufacturers of 9mm uppers produce uppers with this feature.

Check out the Billet KE-9 Lowers at KE Arms.