Today’s tool in The EDC Tool Roll series will be a little bit of a departure in that it will not fit completely in most pockets though it is still very easy to carry compared to similar tools. The Knipex CoBolt Cutter series of tools are the kind of tools that appeal to anyone concerned about being prepared for emergencies and they are exceedingly easy to carry compared to even the smallest traditional bolt cutters. 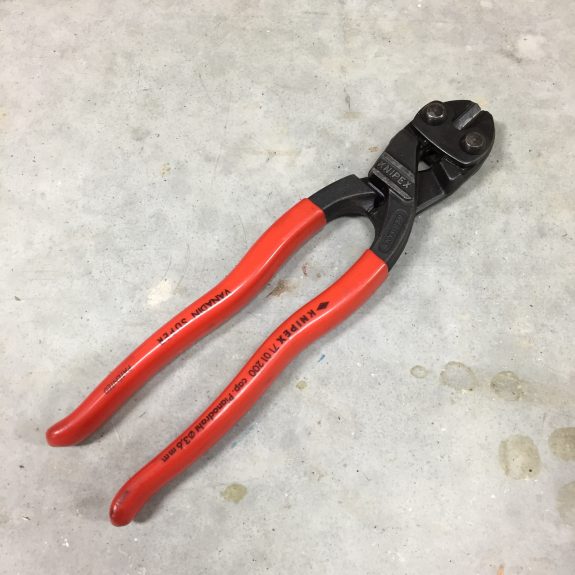 The Knipex CoBolt Cutters feature a compound leverage hinge and are most commonly available with an 8″ overall length (though there is a 10″ version that is harder to find and more expensive). They are basically a pair of compound leverage bolt cutters that are no larger than most pairs of diagnal pliers/wire cutters.

Unlike many larger bolt cutters, most of which are very poorly made, the CoBolt Cutters feature cutting edges that are hardened to 64 HRC. That is as hard as a high end knife. The cutting edge is so hard and the compound leverage is so effective that you will be surprised with what you can cut. I’ve cut small to medium padlocks (especially cheaper locks that aren’t hardened), all kinds of  fencing and heavy wire, large nails and screws, chain, even a sling stud that was too long during a recent installation on a Ruger 10/22 stock. The applications for carrying one of set of these in an urban BOB are nearly endless. You can cut your way into and out of trouble with relative ease.

The CoBolt Cutters are available in a number of different versions but the basic version is my favorite. The Knipex 71 01 200 is the most common model and likely the most versatile. I also have a version that is identical except the jaws are notched to allow them to cut larger diameter stock at the highest leverage point (Model 71 31 200). CoBolt Cutters are also available with angled heads, molded grips, and countless other versions but, again, the basic model is the most versatile (and most affordable).

Where to Buy: Knipex CoBolt Cutters are commonly used in trades so they turn up regularly on Ebay in decent used condition. I’ve purchased both of mine this way and paid less than $15 each. As long as the cutting edges are in good shape and they aren’t pitted, they clean up easily with some oil and a Scotch-Brite pad.

If you can’t find a used pair or you prefer to buy at a brick and mortar, Sears Hardware usually has the basic model at a decent price. Otherwise, Amazon is a great place to buy: Knipex 71 01 20 CoBolt

You can explore all the available CoBolt cutters here.

Alternatatives: I don’t really know of a true alternative for the CoBolt Cutters. I guess a pair of folding compact bolt cutters would be the closest but even those will be considerably larger and likely more expensive for a decent example.

If you have a tool you can recommend, tell us about it below. The comments have been a valuable source of information in this series.