Indian Creek Design has taken the wraps off of their BFD or Blast Forward Device. The BFD represents a unique take on the concussion shield because of how it mounts to the host firearm via a threaded mounting collar that is installed on the barrel behind the muzzle device. This mounting system allows for quick installation/removal of the BFD and accepts a wide variety of existing muzzle breaks. It likely fits the muzzle brake you already have.

Check out the BFD at Indian Creek Design. 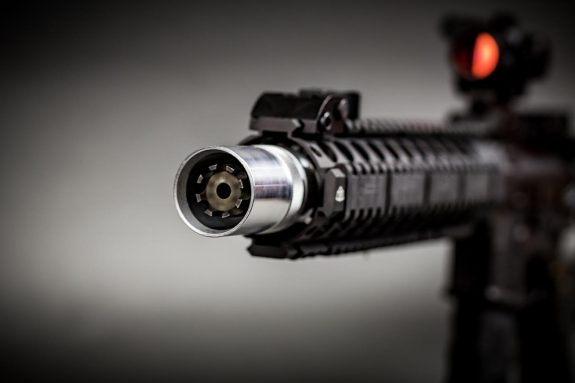 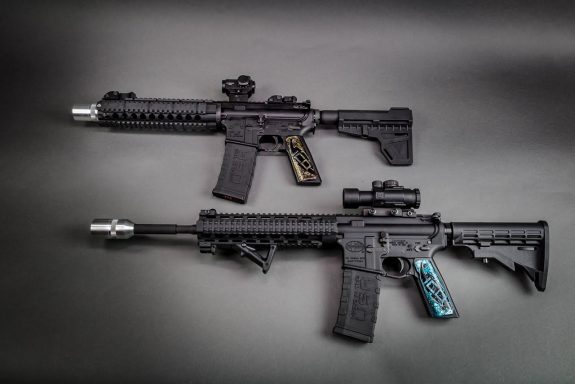 Say good-bye to muzzle brake side and back blast forever!

Nampa, Idaho, September 26, 2016 – No longer will your shooting partners, entry team members, or your wife and kids shrink back from your invitation to go shoot your muzzle brake equipped rifle. The creative minds at Indian Creek Design, Inc (ICD) have solved one of shooting’s annoying dilemmas, eliminating the side and back blast from an effective muzzle brake, with an ingenious device that will have everyone at ranges and along firing lines across this great nation enjoying their chosen pastime more and getting better training in.

Muzzle brakes work by providing ports for the rapidly moving and expanding gasses that propel a bullet to hit against as they exit the end of a firearm barrel, re-directing those gasses to the sides and often back at the shooter to control recoil and offer quicker follow up shots and to control the muzzle so the impact of your previously fired shots can be seen via your optics to assess accuracy. They are also the bane of Range Officers and other people on the firing line, as well as tactical entry team members, etc, due to the back blast associated with their use.

“Muzzle brakes have been around for generations and they are invaluable, especially in target and tactical situations,” says Gary Adams, a spokesperson for ICD, “but people get sick of the blast associated with using a muzzle brake. This has led to a rise in sales of flash cans and linear compensators which only channel gasses forward but do nothing for muzzle rise and recoil. There are a few companies that make a system that couples a specific flash can with a specific muzzle brake but these are relatively expensive and up until now there has been no option for a consumer or law enforcement agency to use whichever muzzle brake they prefer and also run a blast forwarding device with that brake to defeat the blast and noise.

We at ICD have undertaken the task of engineering and perfecting a simple and elegant blast forwarding device, the ICD BFD, that will fit on many rifles and that works in conjunction with virtually any muzzle brake the shooter wants to use. The BFD, which adds only 2.6 ounces to the rifle, is stunningly simple in design, but so very effective that it will literally change the way shooters look at muzzle brakes and shooting in general. It is absolutely amazing how effective it is.”

An added benefit in the BFD re-directing the muzzle blast is the re-direction of the ear drum shattering noise as well. Independent testing has proven that a muzzle brake causes up to a 10x increase in discharge sound level that hits the shooter and those in the surrounding area. The BFD corrals that damaging sound wave and sends it downrange. The perceived sound near the shooter is reduced dramatically. Despite this ability, the BFD is not an NFA controlled item, it is not a suppressor, and no special permissions are required to own or use it.

The ICD BFD is available for any rifle with 1/2″ threaded muzzle devices (AR variants, etc) and for 5/8″ threaded devices such as on AR-10’s, etc. The BFD was extensively tested on various caliber rifles, up to and including a 7mm Remington Magnum bolt action rifle, with excellent results. Finished in a matte black MilSpec Type III hardcoat, Mr. Adams feels that this will quickly become a must have for the casual or avid shooter who wants muzzle control and doesn’t want to feel or subject others to the punishing back blast, and also for tactical operations and Law Enforcement use where the brake blast can be detrimental to operational success and the safety of the personnel involved. Every Range Officer in the world will want these on every rifle, they are that effective.

Instead of spending a large amount of money for a proprietary device that handcuffs equipment choices, departments, agencies, and civilian shooters can now add a moderately priced (MSRP $79.95) piece of American made kit to their existing platform and get a lot more, or rather a lot less, “BANG for their buck”!