Dissipators and mock dissipators are a frequent topic of discussion online. It seems that, when they aren’t available, everybody wants one and, when they are available, very few people buy them. This creates a cycle in which an AR-15 manufacturer brings a dissipator configuration to market to fill the perceived niche, a few people buy them but not enough to justify their production, the configuration is discontinued, and the cycle starts over.

If you aren’t familiar with what a dissapator is, it is basically an AR-15 upper configuration that has a fixed front sight base in the rifle position but placed on a 16″ barrel – so a carbine length barrel with rifle length sight radius. The way this is accomplished varies but it is usually done by placing a low profile gas block under the handguards in the carbine or midlength position as the actual functional gas tap with a front sight tower pinned in the rifle position serving only as a front sight. 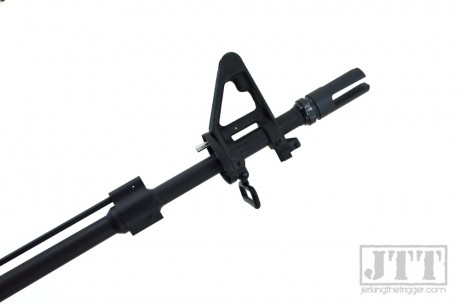 One of the few disspator uppers that has managed to sell well in recent years and actually have some staying power was the Spike’s Tactical GMP upper which was only available at AIM Surplus. I am using the past tense because, due a cost increase, AIM Surplus will no longer be engaging Spike’s to offer these uppers. I happen to own one. It has been a solid performer and I appreciate the lightweight barrel on an otherwise heavy configuration.

Will disspator fans be left out in the cold? Not for long!

It appears that AIM Surplus will be working with Faxon Firearms to create 3 new disspator options: a complete upper, a builder style/OEM style upper, and a dissipator barrel for those who want to build their own. The barrels used will likely be a lighter profile similar to the current Faxon Gunner profile.

The complete upper will be just what it sounds like – a complete, ready to shoot upper. It will be produced by Faxon and offered for sale through AIM Surplus.

The builder style/OEM upper is basically a stripped upper. It comes without handguards, flash hider, charging handle, and bolt carrier group so that you can choose your own.

The barrel will come with a pinned gas block, installed front sight base, and hand guard cap.

These new disspator options are about 8 weeks out. So, dissipator fans have reason to be excited.