Echo Nine Three’s Mk65 Light Mount is a cantilevered, offset light mount that is designed to work specifically with E93 founder Joe Elledge’s pet AK variant – the AMD 65. However, it also happens to work perfectly with MLOK and Magpul MOE Handguards. I have had one in use for a few months now and have come to like it quite a bit, especially for use with one specific light. 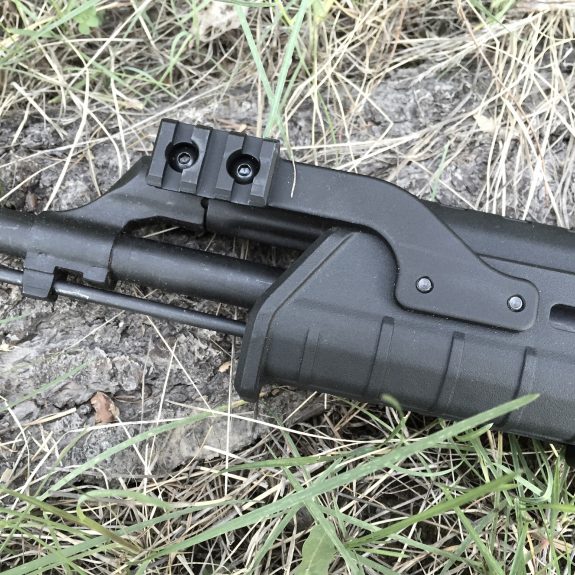 As stated above, this mount is made to work with the AMD-65 but also works perfectly with MLOK and MOE Handguards. You can also install it on other handguards if you are willing to drill two holes. It comes with all the hardware necessary to mount on these handguards including nylon spacers that ensure a tight fit on MLOK slots.

The Mk65 is machined from aluminum and given a hard anodized finish. It mounts via two bolts that come in through the back so you must have access to the back of whatever you plan to mount it to.

The muzzle end of the mount features a three slot 1913 rail which is more than enough space for just about any rail mounted light. It is completely ambidextrous. 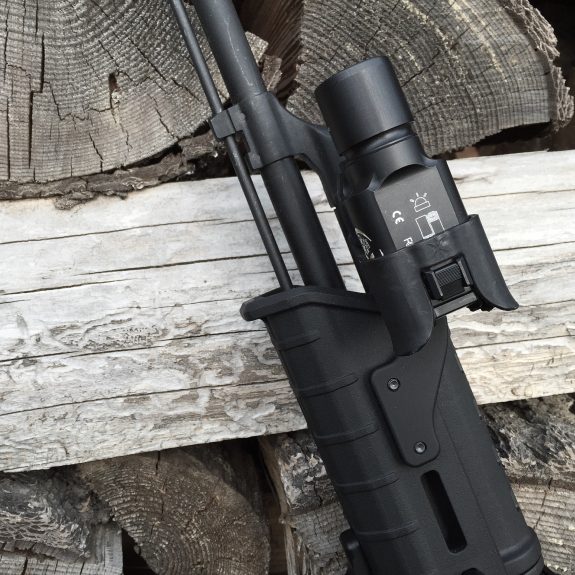 I was not able to track down an AMD-65 for testing this mount which would have been nice. However, I have plenty of AKs with Magpul Handguards so all of my testing took place on those. In particular, I was hoping that this mount would help solve a light mounting problem that I was having on my beater WASR-10, a rifle that I affectionately refer to as the Heinous WASRBeast.

I had no problem installing the Mk65 on the WASRBeast’s Magpul MOE AK Hand Guard. However, some users may find this tricky if they have never had to remove a heat shield from these particular handguards. The heat shield must be removed since the screws come in from the back of the mount. The shield can be replaced after the mount is installed. This points out what is perhaps the most obvious downside to the Mk65. It’s mounting method is awesome for the AMD-65 but may limit it’s application on other hand guards.

This mount solved a problem that I commonly have with short AK handguards – a problem that I was having with the Heinous WASRBeast. The handguards are so short that by the time you place a light and sling mount, there is barely any room to place your hand. Additionally, mounting directly to the handguard usually places the light too low to comfortably activate unless you are using a vertical grip. The Mk65 pushes the light up (or down) and forward which clears space on the handguard and places the light switch where it can be reached more comfortably. The Mk65 is a very good light mounting solution for short AK handguards.

I tested the Mk65 with a variety of lights including INFORCE WMLs, Surefire Scouts, handheld lights in a ring, and pistol lights like the Streamlight TLR-1 and Surefire X series. It works very well with all of them but I thought it shined particularly with the pistol lights. I am currently using it with an X300 complete with Unity Tactical Exos. It is a great set up. 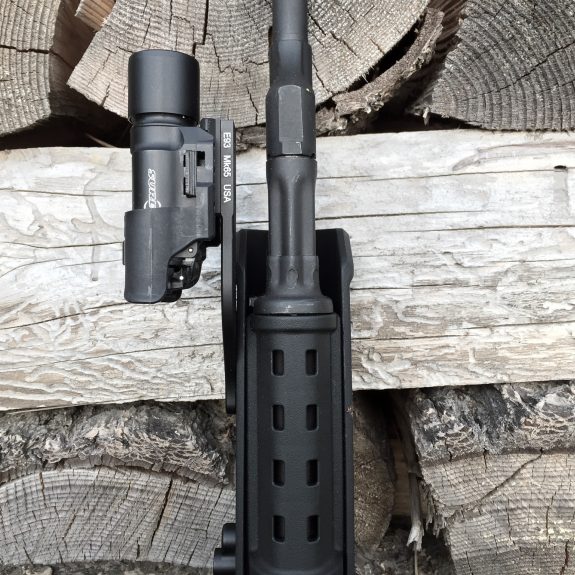 The Mk65 may have been designed specifically for the AMD-65 but it works well on several different types of handguards. It does a great job of overcoming the normal issues with mounting a light on a short AK handguard and it’s 1913 rail ensures it can be used to mount a variety of lights including pistol lights. It’s mounting method may limit it’s use but, if you are handy, you’ll have no problem in most cases. This is a useful light mount for AK shooters.

Check out the Mk65 Light Mount at Echo Nine Three.