Aimpoint introduced three new magnifiers at SHOT Show 2016. The new magnifiers include two new 3X models – one geared toward the military/police market and the 3X-C, a lower cost option for the civilian market. Aimpoint has stated that the new 6XMag should be used with the T2/H2 to provide a crisp aiming dot. They also introduced new mounts that allow the magnifier to be flipped to the side. 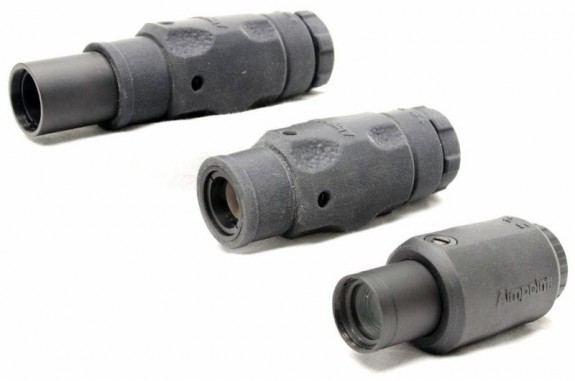 I am a long-time Aimpoint 3X Magnifier user and I am interested to see what these new magnifiers bring to the table over the previous model. If you have been reading this blog for long, you know that I have worked out a way to make the 3X Magnifier work for me, including identifying the best model for me in terms of crispness. I have not been able to spend a significant amount of time behind a T2/H2 yet but judging by what little time I have, they are likely the current best choice for use with any of the magnifiers thanks to their more crisp dot.

Las Vegas, NV – January 19, 2016 – Aimpoint, the originator and worldwide leader in electronic red-dot sighting technology, has announced the addition of three new accessory magnifiers to their product line. Designed to work in conjunction with the company’s electronic reflex sights, these new magnifiers are being offered in 3X and 6X magnification, in both a standard grade for use by civilian shooters, as well as professional grade models.
The new Aimpoint magnifiers feature diopter adjustment, allowing each optic to be individually adapted to the operator’s eye. All are protected by shock absorbing protective rubber covers that also provide an ergonomic grip surface. The Aimpoint magnifiers may be used with the company’s quick-detach TwistMount™, or with the newly launched Aimpoint® FlipMount which allows the magnifier to be quickly flipped in or out of the optical axis, or removed from the firearm completely.
“These magnifiers open up some interesting new opportunities for users of Aimpoint sights.” said Matt Swenson, VP of Sales at Aimpoint Inc. “Our standard grade 3X-C is a great magnifier at a very reasonable price point. On the professional side, the Aimpoint 6XMag offers 50% more magnification than existing US military combat optics, and allows an operator to quickly transition back to their non-magnified Micro T-2 sight for CQB.”
For more information on Aimpoint, visit the company’s webpage at: www.aimpoint.com.

Now Available: PHLster Flatpack Tourniquet Carrier
RE Factor Tactical Wants to Help You Put Tourniquets in the Hands of Military and Law Enforcement