There was a time when I would have said that side optics mounts on AKs were not really a viable solution or at least they had been surpassed in usefulness by other options. They didn’t work well with modern optics, they were heavy, they might not center the optic over the bore, they often had excessive height over bore, and they were very clunky in general. RS Regulate changed all that with the introduction of their original AK side mounts. Later, with the release of their improve AK-300 series mounts, they cemented their place as the best AK optic mounting solution. 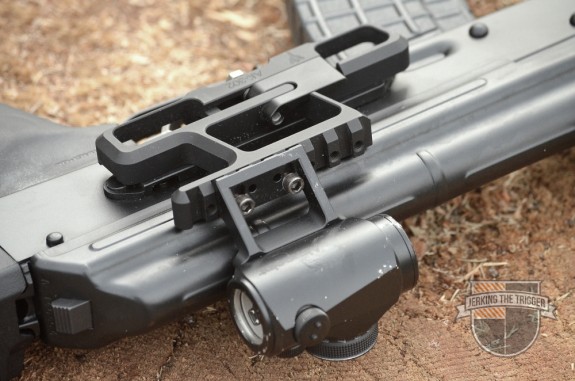 The AK-300 series mount system consists of upper and lower mount components. Basically, you select a lower mount based on your rifle or placement preference (forward or rear) as this is the part that interfaces with the side optic rail. The upper mount components is dictated by your optic and attached to the lower mount. You need both in order to attach an optic.

The lower mount attaches to your AK side rail and is available in several configurations. The AK-301 (the most common lower mount) fits most AKM rifles with side rails and allows optics to be place in a more forward position. The AK-302 (the subject of this review) fits most AKM rifles with side rails and allows the optic to be placed more to the rear of the rifle. The AK-303 is the same as above but with a full length rail that allows for a variety of placement or for use with longer optics. There are also other lower mounts available for other rifles like the VZ.58, Yugos, PSLs, and more.

The upper mounts are available to interface with a variety of optics. This review will utilize the AKML upper mount to mount an Aimpoint Micro (R1).

Both the upper and lower components of the AK-300 series mounts are machined from 6061-T6 aluminum and are hard anodized for durability. The locking lever is adjustable without tools and installs easily. The optic mounting location can be adjusted forward/back and side-t0-side to center the optic over the bore. Once the user is happy with how the optic is centered, they can choose to pin the upper and lower mounts together with supplied pins.

The mounts sit low enough to allow a 1/3 co-witness when used with most red dot sights. In some configurations, the dust cover can still be removed for cleaning with the mount installed. 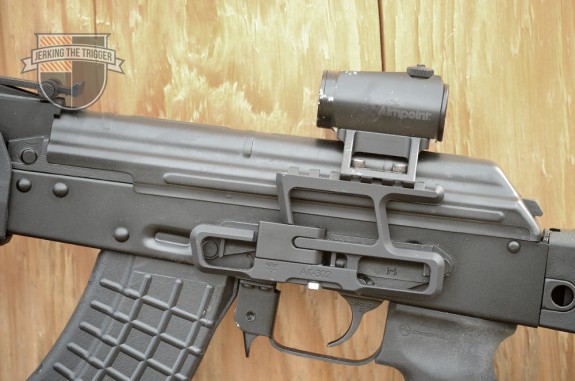 I have been trying mounting Aimpoint Micros closer to the eye in order to acquire the dot sooner and more easily from awkward positions (there may be an article on this later). That is why I chose the AK-302 lower mount for use with my DDI Zhukov. The AK-302 is RS Regulate’s “rear-biased” mount that allows the optic to be place further to the rear of the receiver.

This configuration works well for me with one caveat. Mounting the optic to the rear ON MY PARTICULAR RIFLE does not allow the dust cover to be removed with the mount in place. It repeats zero well enough that this is a non-issue for cleaning/maintenance but does add another step to certain types of malfunction clearances that may require removing the dust cover. I have tested it with 3 other AKs in my collection and it allows the dust cover to be removed. I suspect that the AK-301 forward-biased mount would allow field stripping on this particular rifle and I plan to try that as funds allow.

The repeat zero capability for this mount is more than sufficient for its intended purpose. I have taken it on and off my AK countless times during the review process and the zero has never wondered outside of what is noticeable on an AK with a red dot sight. That said, this has spent most of its time mounted on a DDI that is impressive in its accuracy and there has been no discernible shift.

Durability seems to be excellent. While taking pictures for this review, the rifle fell off a wood pile that I was photographing it on. It tumbled all the way down the pile and hit the optic and mount several times with scratches and pine pitch to prove it. There was no bending or breaking. I confirmed that the dot still co-witness with the sights and have since shot it several times on paper. There was no loss of zero.

The weight on these mounts is nothing short of amazing. The upper and lower mount combined weigh in at a scant 3.25 ounces. That is actually less than RS Regulate advertises and within about a quarter ounce of typical AR-15 mounts for Aimpoint Micros. It’s light weight and placement over the receiver means that it basically has no effect on the handling of the AK. The scale will tell you its there but when you are actually shooting your rifle, there is no discernible effect on the balance of the rifle.

It is also impressive how low profile this mount is. The QD lever sits flush with the mount itself. The entire setup adds very little thickness to the AK itself. On top of that, RS Regulate was careful about ensuring that all corners were beveled which further enhances just how svelte the mount feels.

The stars have really aligned for RS Regulates mounts. They have a quality that stands on its own but with the arrival of a quality, readily available right-side folding stock (Magpul Zhukov), it makes more sense than ever to give one of these a try. Having a folding stock that will fold with the mount in place removed one of the final barriers for me to try a side mount. 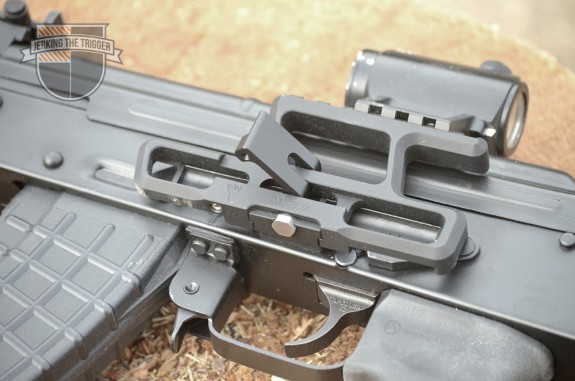 In my experience, the RS Regulate AK-300 series mounts are the finest optic mounts available for the AK family of rifles. They repeat zero, hold up to abuse, work with today’s best optics, place the optic low enough to co-witness with your iron sights, allow field stripping without being removed in most cases, and weigh very little. I am done burning my fingers on railed gas tube replacement type optic mounts.

Check out RS Regulate’s website to find the right mount for your AK and optic combination.