I bought a DDI Stamped AK47, Zhukov Edition for 2 reasons: David Fillers and Troy Sellars. David Fillers, the owner of DDI, is a shooter and all-around good guy. He answers questions on Facebook, answers his phone and even gives out his personal number, and I already knew him from his time as owner of one of the best gun shops in Indiana. Troy Sellars should need no introduction if you know AKs. He is one of the premier AK builders in the USA and he also happens to be production manager at DDI.

There was more to my decision to plunk down my hard earned cash than that but those two individuals made it a whole lot easier to spend my money with DDI. I tend to trust the gear more when I can trust the people behind the gear and, in this case, that approach served me very well. 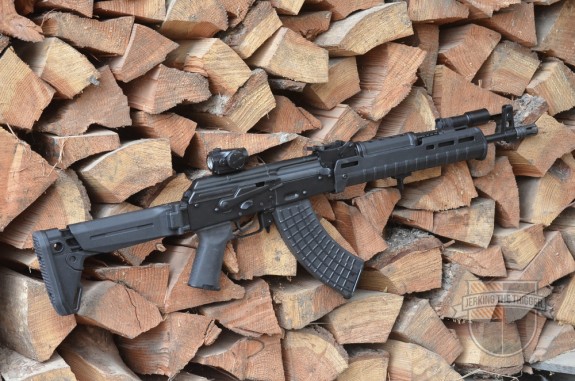 DDI’s stamped AKs share many common features. They use a mix of in-house parts (like the receiver, side rail, and retainer plate), exclusive US-made parts (like the 4140 steel barrel manufactured to DDI’s spec by Green Mountain Barrels, and Tapco G2 Trigger), and various Hungarian AKM parts.

This particular version of their stamped AK sports the Magpul Zhukov Hand Guard and Folding Stock. It retails for $850-870 which is impressive considering the price of the Magpul Zhukov furniture and the retail price of DDI’s basic Stamped AK ($730).

I have somewhere in the neighborhood of 1100 rounds through this AK. There hasn’t been a single stoppage of any kind. I have not cleaned it. I only applied white lithium grease before I shot it the first time.

The fit and finish on these rifles is not just great for an AK. Its just plain great. The KG GunKote finish is evenly applied and has been holding up extremely well which is a kick in the face to those of use who have paid a lot more for AKs with flaky painted on finishes. The rivets are better than the 2 AKs that I own of Russian origin which is to say they are excellent.

It is also very, very straight as evidenced by the mostly centered front sight post after zeroing. DDI actually test fires these rifles twice before they leave the factory and the first test fire includes a rough 25 yard zero. If the rifle requires excessive windage adjustment of the front sight which may indicate that something is canted/warped, it will be caught there and corrected. It is a very simple way to ensure a relatively straight AK and provide a useful service for the customer. Not many companies zero your rifle for you! 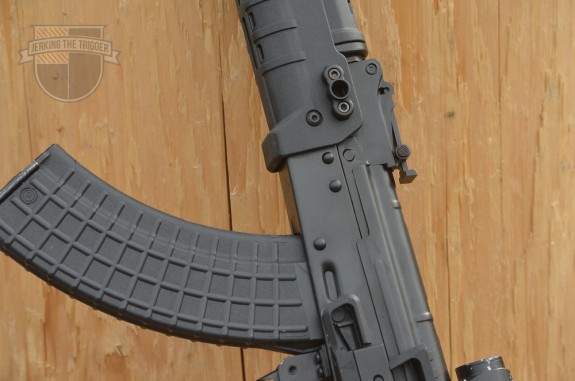 The action is very smooth. The bolt carrier can be made to hang up to the rear if you ease it forward. However, this is typical of the Tapco G2 trigger and not the rifle itself. It is also not a reliability issue as indicated by performance above.

There is also an impressive lack of sharp edges. I have other AKs with trigger guards that abrade your middle finger, magazine wells that will shred your hands, and sharp edges at the rear of the receiver that will tear up the back of your hand over the course of a training day. I haven’t found anything like that on this AK.

This rifle turned heads at my local gun shop when we took it out of the for my FFL transfer. There are probably some “pre-ban” AKs that would turn heads at a gun shop but it is impressive for a new production AK to stand out the way this rifle did.

It has hard to imagine accuracy testing an AK. Generally, I would just zero it at 25 yards and then fine tune it at 100 yards. As long as it could hold 4″ at 100, I would be happy. If an AK, like one of my SGL-21s could hold 3″ at 100 yards, I would be ecstatic. I intended to do the same with this rifle but when I shot my first zeroing group at 25 yards, all three shots of Wolf Polyformance went into nearly the same hole.

This merited further testing so, with a freshly zeroed Aimpoint Micro on a RS Regulate AK-300 Series Mount, I proceeded to shoot two different 10 shot groups at 100 yards. The first one went into 3.1″ and the second went into 2.8″. These are 10 shot groups with an Aimpoint and Wolf ammo. That is pretty much the limits of my ability with an Aimpoint equipped AR-15, let alone an AK. I tried another 5 shot group (I wish it was 10 but I mixed up my magazines and accidentally used some of the Golden Tiger when I didn’t intend to) on a subsequent range trip with Golden Tiger and that went into a conservative 2.5″. 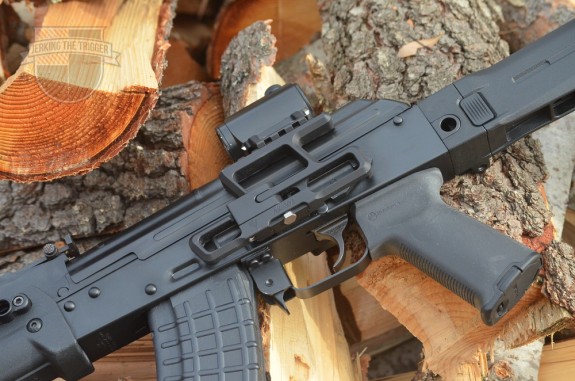 Practical accuracy has been excellent as well. Hits on a C-zone steel at 200 yards are easy. Hits on a full size silhouette at 300 yards are easy once you work out your hold. If you are the type of guy who shoots AKs because you like to blame your misses on your rifle, don’t buy a DDI.

I didn’t have an easy way to mount a magnified optic on the rifle or I would have tried that too. Many users are reporting sub-2″ performance at 100 yards with magnified optic and, based on my experience, I believe it. This is easily the most accurate AK I own and it isn’t even close.

I don’t intend to turn this into a review of the Magpul Zhukov Furniture but I should mention it at least briefly. The hand guard does seem to hold a bit more heat than a standard hard guard. I wear gloves when I shoot AKs based on years of experience with hot hand guards and sharp edges. They all get hot. It isn’t that big of a deal.

The stock folds to the ejection port side of the rifle which I like since it lets me fold it even with the RS Regulate Mount installed. I own two Zhukov Stocks and they both feel a bit spongy against your shoulder, especially when the stock is in any position other than fully collapsed. This isn’t a big deal but it should be noted.

Overall, the extra real estate for gripping and lights, improved handling, folding capability, and M-LOK compatibility make the Zhukov furniture very attractive for me. The hand guard is especially worthwhile just for the ease of mounting a sling and light.

Most reviews of DDI AKs mention that their magazine wells are tight. DDI will tell you that themselves. They build them tight because if they don’t, they will get complaints. My DDI AK was no exception.

The only magazine that would fit it was the included Magpul MOE AK Magazine. I tried it with US Palm AK30s, Bulgarian Circle 10, Chinese Flat Backs, Hungarian Tankers, and various other Euro Surplus Steel Mags. None of them would lock into without a fight and most wouldn’t lock in at all. I don’t want to wave this off as no big deal but, to me, it was no big deal.

DDI would have opened up the mag well if I asked them to. They have done the same for others. However, I have owned several AKs over the years including some very high end ones and the only ones that I did not have tune the magazine catch on were those that were already tuned by professional AK gurus like Arizona Response Systems and In Range.

I spent a little time with a file on the magazine catch and now all of my magazines work with basically no wobble. I acknowledge that there are massive variances in the dimensions of AK magazines from around the world and I guess I have reached the point where I expect to have to do this on anything short of custom AK. If you aren’t comfortable taking a file to a surface that is going to be scuffed bare after your first range trip anyway (the magazine catch), DDI will take care of it for you. 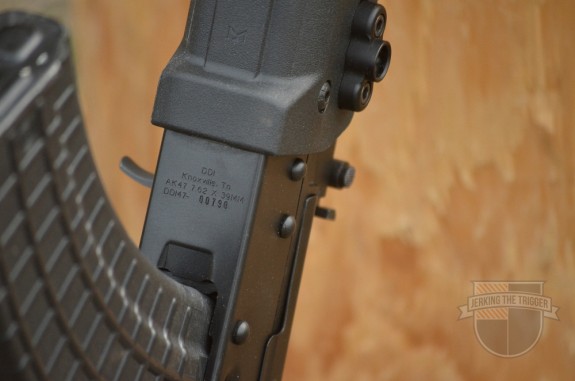 This rifle has really changed the way I think about AKs and even the larger idea of defensive rifles. I like to think that every man should be a rifleman which would involve owning at least one rifle. Typically, that meant that, when asked, I would recommend an AR-15 for its reliability, accuracy, and ergonomics. I have always acknowledged that AKs are very capable rifles but I can admit that I am generally biased toward the AR-15.

Then this DDI came along. It rivals an off-the-shelf AR-15 for accuracy and certainly seems to have reliability in spades. It may give up something to an AR in terms of ergonomics (all AKs do) but it also costs considerably less than most AR-15s of equal quality. That cost rift becomes larger when you consider how affordable 7.62x39mm ammo is.

If you tend to be of the mind that a man should own at least one defensive rifle and you are predisposed to AKs over ARs, it is hard to imagine a better choice than this. It is priced at the more affordable end of the AK spectrum and offers far more than a basic import in terms of quality and accuracy. If you were to pay any less, it would be hard to get as much rifle for your money and if you were to pay more, I am not sure you would gain much… if anything. DDI’s price, features, and quality help it carve out a really interesting niche in the spectrum of AKs and defensive rifles in general.

I think the previous two paragraphs highlight what I like most about this rifle and DDI in general. They are not making rifles for the AK collector. None of their rifles are “correct” clones of a Russian AK that a collector spotted in a newspaper article. These are rifles made for shooters and that are meant to be shot. That is the only way you can explain their feature set. They have more than enough accuracy to be interesting, reliability enough to get your through a training course and then some, a finish that shrugs off whatever the rifle will face in the field, and a price that won’t make you shy about taking it out of the safe. 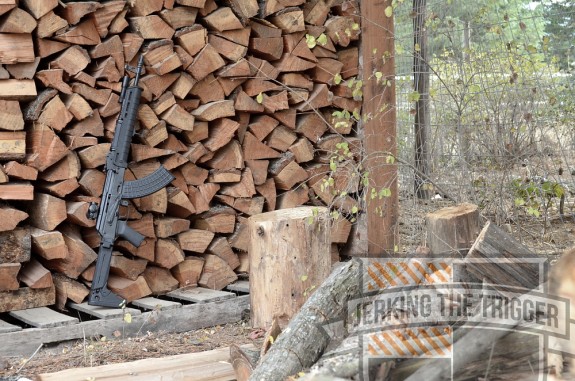 The quality and accuracy of this DDI AK has impressed me. The fact that DDI’s rifles are roughly zeroed when you take them out of box impresses me. The people behind DDI impress me. If it isn’t obvious, I’m impressed.

If you are an AK collector, you may not understand a rifle like this. If you are a shooter, this is exactly what you want.