Ruger’s new Ruger Precision Rifle (RPR) is ambitious to say the least. It manages to shoehorn a staggering amount of features, interesting design elements, and forward thinking modularity into its steel and aluminum chassis. If it manages to live up to its marketing, it could turn the market on its ear. 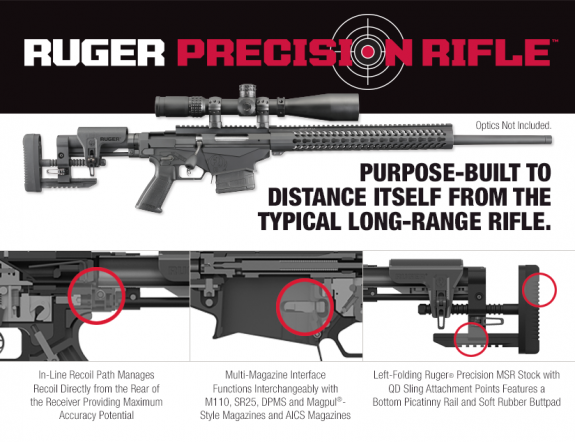 Ruger has not received enough credit for how they have improved the quality of their barrels. They are hammer forging many (if not all) of their rifle barrels in house and they have seen accuracy improvements across the board including in the Mini 14, which is now MUCH more accurate than the internet thinks. Even Ruger’s budget American Rifle exhibits excellent accuracy so it makes sense that they would build this new precision rifle around one of their hammer forged barrels.

Barrel aside, the RPR’s real headlines are being generated by its chassis. The receiver is steel which rides in an aluminum chassis. The barrel can be changed and headspaced with a standard AR-15 armorers tool and headspace gauges which is more than just a little cool. This use of a barrel nut that is compatible with AR-15 armorers wrenches also means that the RPR can accept AR-15 rails like the Samson Evolution KeyMod rail that is included.

The RPR’s top rail has 20MOA of elevation built in. It is attached to the receiver via screws and easily replaceable.

The grip and 45 degree selector are standard AR-15 parts so the user can customize them to suit their tastes. The included selector is reversible for left and right hand use.

The Ruger Marksman Adjustable trigger is externally adjustable from 2.25 – 5 pounds via a wrench that is stored on the rifle.

The innovation continues to the magazine well where you will find an adaptable system that can be made to work with 3 different types of magazines that are common to long range precision. The RPR can accept SR-25 pattern magazines like those from DPMS and Magpul’s PMAG LR. It can also accept AICS magazines and some M-14 magazines.

The RPR is loaded with even more meaningful features than I can cover here outside of a review. It is well worth looking through Ruger’s RPR website to get more information. As amazing as all the engineering and features that are crammed into this rifle are, the price may be the most impressive. It will be available chambered in .308, 6.5 Creedmoor, or .243 Winchester for an MSRP of $1399.00. The actual street price will likely be down around $1200.

This is a strong offering from Ruger, especially following the release of the strangely packaged and marketed SR-556 Takedown.

One Response to Ruger Precision Rifle