The ROSCH Works TM-1 is a simple light mount with a ton of versatility built in. It’s simple in that it has a single screw and the bulk of it is machined from a single piece of steel. It’s versatile in that it can mount a light on a shotgun or AR-15 with gov’t profile barrel at just about any position “on the dial.” 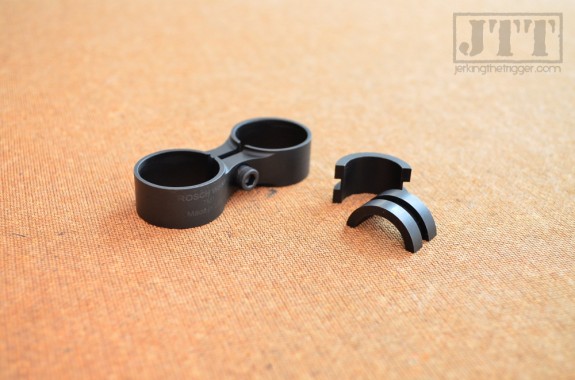 The TM-1 Light Mount is designed to be mounted on AR-15s barrels or 12 gauge shotgun magazine tubes. I can hold flashlights that range in diameter from 0.987 – 1.003”.

I don’t typically comment on price, preferring instead to let you decide what something is worth. However, in this case, the price is one of selling points. The TM-1 costs just $30 + $5 for a shim set if you need them. 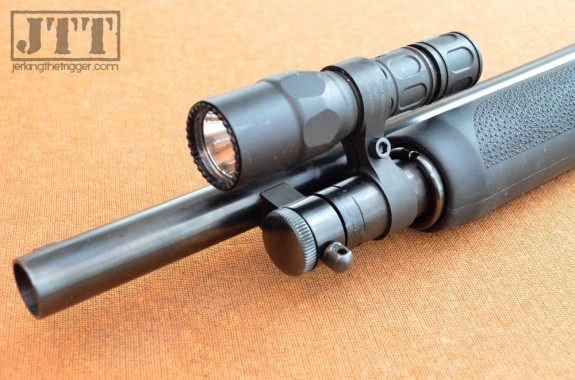 The TM-1s biggest strength is its versatility. First, it doesn’t require a special hand guard or rail to mount. It just clamps onto something that your firearm already has – the barrel or magazine tube. Second, it can be mounted to either AR-15s or most 12 gauge shotguns. Third, it can be mounted at just about any position. If you want it at 10:30 on the dial for your support hand thumb, you can do that. If you want it at 6:00 to it is in line with the bore, you can do that too.

ROSCH Works struck a good balance between making the TM-1 trim and lightweight but also confidence inspiring in terms of durability. It is a single, solid piece of steel and it feels like it yet is only weighs 1.5 ounces (2.1 with shims). I am fairly sure that you will break your flashlight long before you break the TM-1.

I tested the TM-1 in several positions on an AR-15 and then on a shotgun where it immediately found a permanent home. It works very well with the light positioned at roughly 10:30 on the dial, especially on a shotgun. In this position, you can rotate the mount so that the light is tucked as close as possible the hand guard or fore-end and then slide the light forward and back until it positioned perfectly for your support hand thumb.

On an AR-15, I like it best when it positions the light at 6:00 on the dial. This allows you to either use the sling swivel to activate the light by pressing it against your light’s tailcap or simply slide your index finger forward to activate. It also places the light in line with the bore which makes it easier to work around cover and barricades. 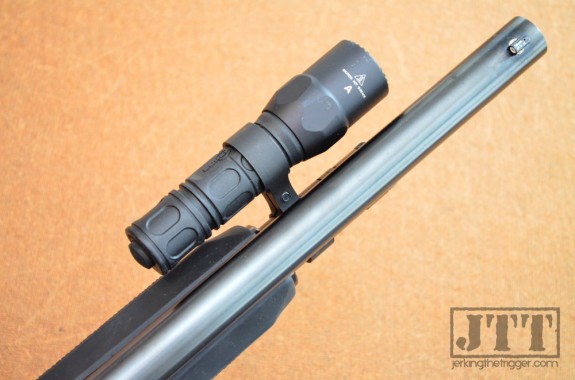 I tested the TM-1 with several lights. If you are looking for a bargain, the Surefire G2X fits perfectly and boasts over 300 lumens of output. The Surefire Fury also worked very well. The Elzetta ZFL-M60 makes for a bomb proof pair when coupled with the TM-1. ROSCH Works’ own stand-alone light, the WL1, makes for a bomb proof pairing that is also very lightweight. It will be available with an optional tailcap that supports the sling swivel method mentioned above.

The biggest downside to the TM-1 is that it mounts to the barrel and that may not work for some shooters. It probably doesn’t make a lot of sense to use the TM-1 on a free-floated AR-15 but, if you have a free-float rail you are probably in the market for a rail mounted light mount anyway. This is complete non-issue for those who intend to use it on a shotgun.

The TM-1 is simple, clever, durable, well made, lightweight, versatile, and affordable. It has found a permanent home on one of my shotguns thanks to its ability to be fine-tuned to the shooter and the specific firearm it is mounted on.

Check out the TM1 at ROSCH Works.