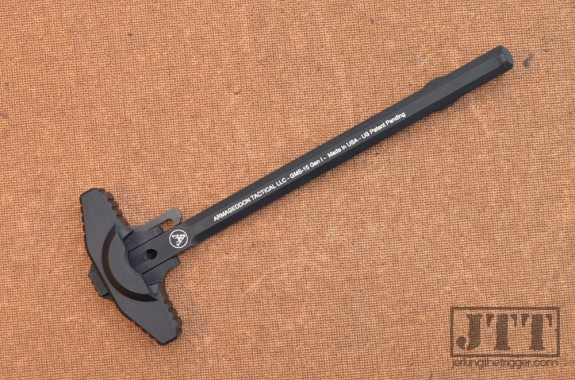 The majority of the GMS-15 Charging Handle is machined from 7075 aluminum billet. The latch is machined from 4140 steel which is then heat treated. The aluminum parts are finished with MIL-A-8625F, Type III, Class 2, Teflon impregnated anodization and the steel latch is manganese phosphate finished.

The GMS-15 has two main assemblies. The first is the stem which extends into the receiver in order to pull on the bolt carrier’s gas key. This part looks mostly similar to any other charging handle except for the addition of a diagonal bore hole through the back of the stem which is part of the gas management system and the fact that it extends back slightly further than most and is visible at the back of the charging handle (it looks like a button).

The handle assembly contains the latch (and some other goodies) and the entire assembly rides forward and back on the stem. Its rearward travel is stopped by a massive, confidence inspiring lug on the stem. The handle consists of an upper and lower part that are joined by two large pillars with roll pins pressed through them. These roll pins are only used to hold the sections together. They do not take any stress from working the charging handle. The latch is secured inside this assembly and is actuated by mechanical means as the handle assembly moves back on the stem. It does not have a pivot that can be stressed by applying too much force to the latch via the typical lever that you find on most charging handles.

The previously mentioned gas management system will be of great interest to those who shoot suppressed. It consists of the previously mentioned diagonal bore hole through the stem which serves to deposit the excess gas into a reservoir in the handle. The reservoir is a large cavity with a ledge that extends slightly over the rear of the upper receiver in order to seal the charging handle opening. Most charging handles that are designed to be used with suppressor just have a ledge that redirects the gas. The GMS-15 actually closes off the top of the upper receiver’s charging handle opening. 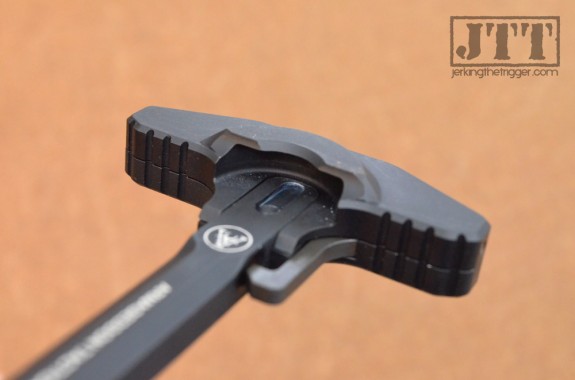 The quality of the GMS-15 is excellent. It moves smoothly in the upper receiver like a well oiled and already broken in charging handle form the moment you install it. I assume this is due to the Teflon impregnated in the finish. The parts are nicely machined and well finished. Sharp edges have been removed where possible. There is an immediate impression of quality.

The gas management system is really clever and seems to work very well. The difference in the amount of gases that always seem to be directly injected into your nose is easily noticeable when comparing the GMS-15 to a standard charging handle. It was also an improvement over the newest version of the BCM GUNFIGHTER charging handle which does have a ledge to help redirect gases but is not specifically billed for use with suppressors. 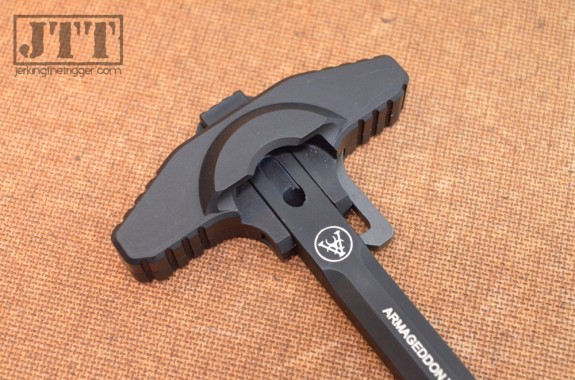 The GMS-15’s unique design makes it mostly ambidextrous. The entire handle assembly moves forward and back on the stem so, most of the time, it doesn’t matter which hand you use to pull it. The only caveat is that the GMS-15 requires tension be placed on it by the BCG, buffer, and recoil spring for it to unlock so if the bolt is locked to the rear, you will have to press the “button” (which is actually the stem extending back through the handle assembly) to release the handle.

I let 2 southpaw shooters that I know try the handle. Neither seemed to think it was a big deal to have to touch the button slightly when the bolt was locked back. Both commented that it actually felt like their thumb found the button anyway and it was really only an issue for malfunction clearance they tended to use the bolt release to release the BCG during reloads. If you are a left handed shooter, you will want to be aware of this idiosyncrasy before purchasing.

The handle assembly is probably the biggest key to why I like the GMS-15 so much. The way it moves on the stem offers several unique advantages and makes it is a joy to use. It is easy to grasp without having to be overly sharp or overly large. It is the most comfortable charging handle I have ever laid hands on. 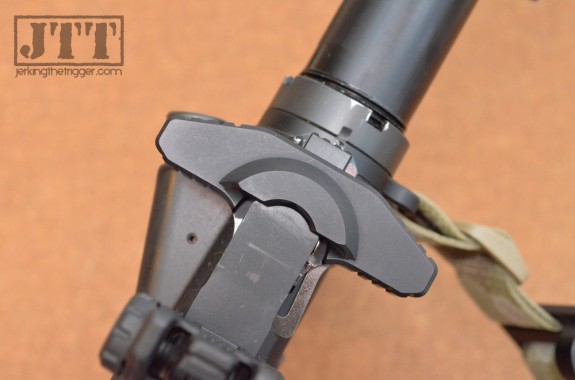 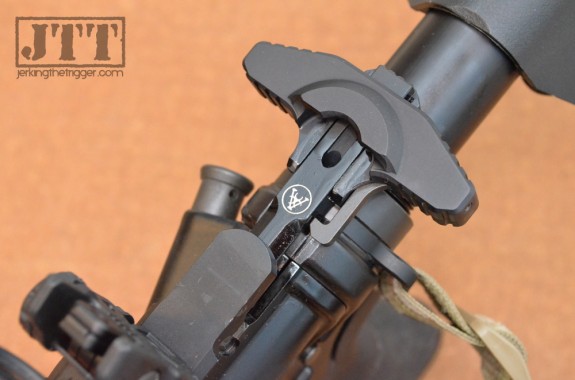 The handle design also allows the GMS-15 to operate without a large latch lever or pivot point to stress. The handle is held together with roll pins but these pins pass through large pillars which, along with the previously mentioned lug on the stem, take all the stress. The lack of hooked shaped lever means there is less likelihood of the charging handle snagging your gear. 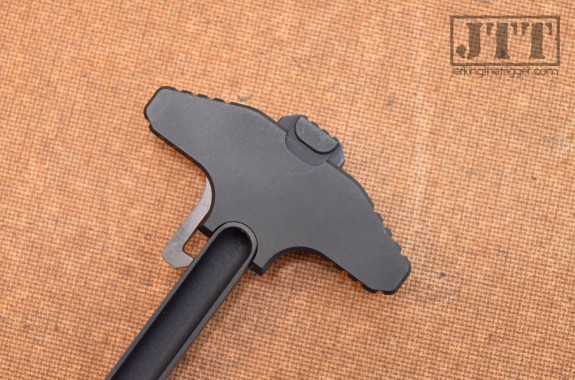 My initial experience with an early GMS-15 was a rocky. I tried it on a handful of upper receivers and found it unlatched under recoil. I shared this with Armageddon Tactical and their response told me everything I needed to know about them as a company. I could tell it absolutely ate at Chris, the owner, that I was having a problem with his product and he contacted me several times to see how my continued testing was going.

He continued to test and diagnose problems until he found that a small number of early GMS-15s were assembled with the wrong spring and then went so far as to build a fixture to test his charging handles determine which had the incorrect spring! He was a man on a mission.

The GMS-15 that I have in hand now functions perfectly and the production issue has been corrected. Chris and Armageddon Tactical obviously have a great burden to deliver a killer product even to the point that they incur the large cost of creating the test fixture just to weed out a handful of charging handles that will probably work for most folks but aren’t exactly what he wants. That is impressive.

The GMS-15 is an excellent charging handle that is easy to use. It does a great job of redirecting excess gas from shooting with a suppressor installed. It is robust and manages to remove traditional charging handle weak points through clever engineering. It is “ambidextrous” but left-handed shooters will want to read up on how it operates before taking the plunge.

From this right-handed shooter’s perspective, it is my favorite charging handle to date.

Check out the GMS-15 at Armageddon Tactical. You can save 5% off the purchase price of a GMS-15 by shopping at Impact Weapons Components and using the code “triggerjerk”.