I built an AR-15 last year with the intention of using it as a light precision set up. I just wanted something that was capable of stretching the legs of the 5.56 to the useable extremes of the cartridge from a 16” barrel. A set up like that requires a quality trigger and so I set out to choose a trigger for the build.

Around that time, I was experimenting with Geissele Automatics’ Super Dynamic – Combat trigger. The flat trigger bow immediately made sense to me after use so it seemed logical that I should try the enhanced version of that same trigger on the precision build. 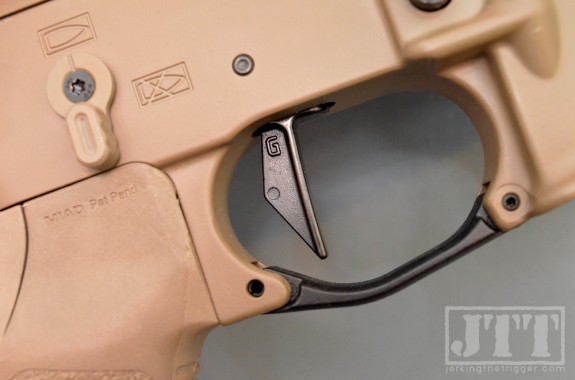 Many of Geissele Automatics’ non-adjustable 2-stage triggers can be separated into two camps: Combat and Enhanced. The internals are largely the same and come from the same proven pedigree, the SSA, but the various triggers differ in the shapes of the trigger bow. The Combat versions typically break with 4.5# total weight that feels carrot-like while the Enhanced versions of the same triggers break with a 3.5# total weight that is crisper, like a candy cane. The carrot and candy cane descriptors are Geissele’s own terminology and they describe the feel of these triggers very well.

When you start to understand all this, the Geissele naming conventions start to make sense. The Super Dynamic – Enhanced (SD-E) that is the subject of this review, reveals just about all its secrets in its name. The “Super Dynamic” portion of the name denotes the use of Geissele’s flat trigger bow and the “Enhanced” denotes a 3.5# (mine averages 3.5# on the nose) with a candy cane like break.

Everything that I loved about the SD-C is present in the SD-E with the exception of about 1# of pull weight. The flat trigger bow and all its benefits are the star here. The flat trigger bow as designed by Geissele Automatics has two main benefits for me. The first is that it actually increases the trigger reach slightly, especially at the center of the trigger bow. This encourages proper finger placement. The second benefit is that it feels exactly the same from top to bottom allowing the shooter to slide their finger down to the bottom of the trigger to increase leverage. This functionally reduces the pull-weight of the trigger.

Geissele’s candy cane analogy is very fitting since it is noticeably crisper than the SD-C but still not quite like the proverbial glass rod or icicle break. The first stage take up is very light and terminates sharply at the point at which the second stage begins. This differentiation between the stages is easy to feel in spite of the fact that the second stage weighs in at only about 1.3#. The second stage of the trigger processes just the slightest hint of creep (hence the candy cane analogy) before it breaks cleanly. That little bit of creep doesn’t really register with you until the trigger is already breaking. 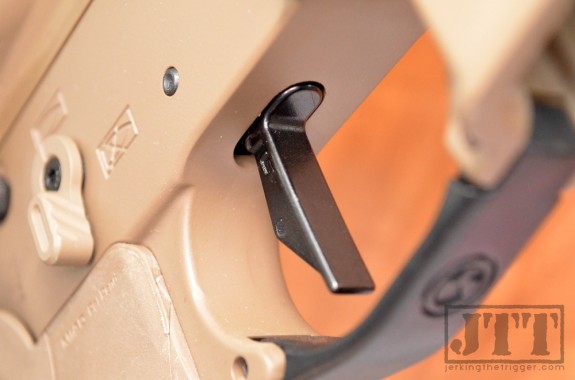 I have spent several months now with both the SD-C and SD-E. The difference between the two is easy to feel but harder to quantify since they both are basically at home in the same roles. Both offer notable refinement over a standard AR-15 trigger group. In spite of the SD-C’s heavier break, I find it to be extremely controllable and I wouldn’t hesitate to use either of these triggers in a light precision AR-15 build. The SD-E however, with its notably lighter and crisper break is even more effortless and very well suited to situations where you really want to stretch the legs of whichever cartridge you are shooting.

Basically, the SD-E is kind of like the friendlier of two really friendly, good looking twins. They are both nice to look at and have personalities to match but one is just a little easier to talk to. You can tell the difference immediately but you wouldn’t mind getting a date with either.

The SD-E lives up to its candy cane-like billing and pull weight specs. It is notably more refined than the SD-C and is exceedingly easy to control. The flat trigger bow offers tangible benefits to the shooter and just might spoil you for curved trigger bows. This is a great trigger.

Check out the SD-E at Geissele Automatics and at Brownells.