Blue Force Gear has introduced the latest evolution of the Vickers Combat Applications Sling (VCAS) – the Vickers 2-2-1 Sling. It is basically a a standard VCAS with additional hardware that provides the ability to transition from 2 point to single point configuration. 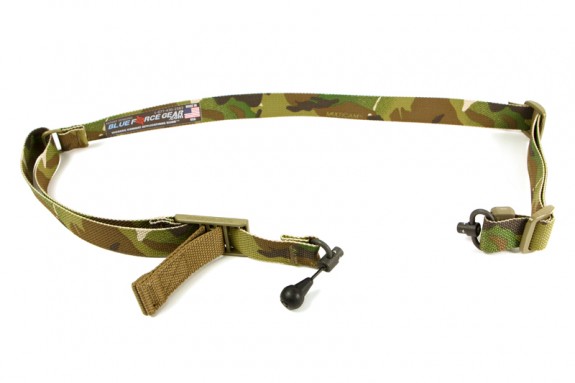 The Vickers 2-2-1 Sling utilizes a handful of already existing Blue Force Gear hardware to achieve its 2 to 1 point functionality – the RED Swivel, Burnsed Socket, and a standard push button QD swivel. The RED Swivel sewn in at the front attachment point. This is ideal when coupled with the included Burnsed Socket. I have tested this configuration before it was offered as an off-the-shelf package and found that the RED Swivel is far easier to use in the 2 to 1 point configuration than a standard push button swivel.

A standard push button QD swivel is included to be woven in at the rear attachment point. Blue Force Gear didn’t sew in this swivel so that the sling could retain some additional adjustment.

Check out the new Vickers 2-2-1 Sling at Blue Force Gear.