Lower receivers are plentiful once again and there is no shortage of choices available to the potential AR-15 builder. There often isn’t much difference between lower receivers in terms of price and features so it is usually the little things that separate one brand from another. Aero Precision makes a great lower because they typically get those little things right. 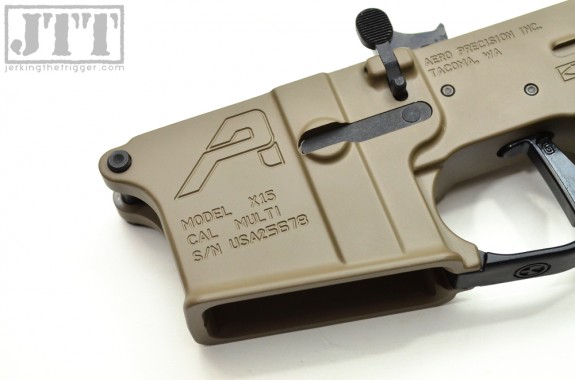 The Aero Precision AR-15 Stripped Lower Receivers are machined from 7075-T6 forgings. They offer both standard hard anodized lowers and Cerakote lowers in both Desert and OD Green. The lower that I have been working with is their Desert Cerakote (FDE) model.

The lower features pictogram selector markings. It is marked “CAL MULTI” which is nice if you plan on using it for something other than a 5.56 build. Aero Precision also threads the take down detent hole which is a unique and handy feature. 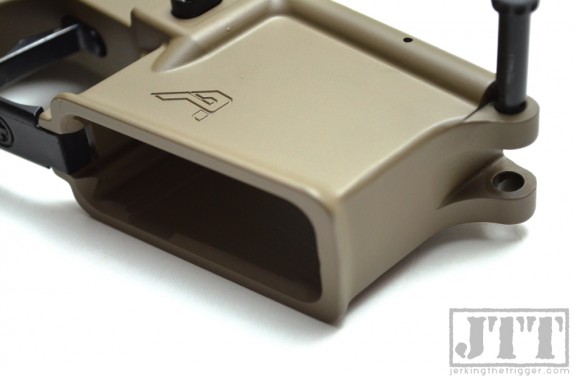 The “fit and finish” is quite good which isn’t surprising coming from Aero Precision. They are known for clean machining. The interior of the magwell is smooth and clear of burrs. The front of the magwell has had all of the typical forging flashing machined away. The exterior lip of the magwell is also nicely rounded (some manufacturers leave this area too sharp). The inside of this lower is just as well finished at the exterior. I can’t find any flaws in the coating.

The threaded take down detent hole is a very cool feature. It allows you to use an easy to find 4-40 set screw to retain the take down pin detent and spring which makes installing your receiver extension quite a bit easier. if you don’t want to use this feature, you don’t have to and the screw is not included.

The magwell dimensions are spot on. I have Magpul PMAGs from around when they were first being produced and these earlier ones can be a tight fight in some receivers. They fit well in the Aero Precision lower. Every magazine type that I tried dropped free and fit well without excess wobble. I tested the lower with multiple generations of PMAGs including the new GEN M3 and MOE PMAGs, Tango Down Arc, NHTMG, Brownells, and D&H magazines.

I really appreciate the subtle markings that Aero Precision brands their receivers with. Markings obviously don’t affect performance but, all things being equal, I prefer a lower that has more restrained markings. I don’t really want clever selector markings or over the top roll marks. The understated “A” logo is more my speed.

Aero Precision hits all the right notes on these lowers except for one. Their magwell is not beveled near as much as it could be. It is the least beveled of any lower that I own. There is a small bevel and reloading still feels fairly smooth but it would be nice to have that little extra bit of forgiveness built into the magwell.

Thanks to its attention to detail, quality of coating, and understated markings, this is one of the cleanest looking lowers that I have seen. The threaded takedown pin detent hole is a well executed and handy touch. The only misfire is the relative lack of bevel on the magwell.

I especially like how reasonably priced these lowers are especially when you consider the Cerakote options. Check out Aero Precision when it is time to start your next build. 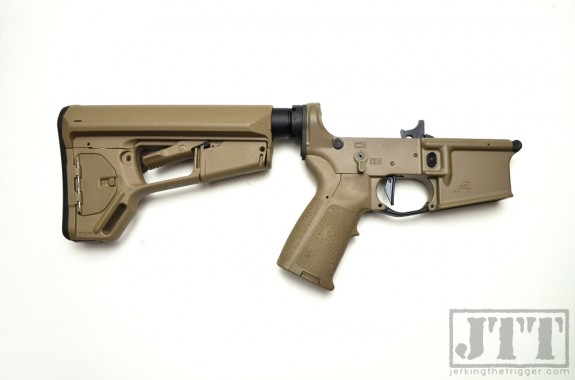