I purchased a Vanguard Quest T62U last year to give me better year round use of unimproved shooting ranges and potentially for hunting. The Quest T62U is a tripod with a 360 degree swiveling rifle yoke that can also be converted into a bipod or monopod configuration. I have used Vanguard camera tripods in the past and have generally found their quality to be acceptable which made me comfortable with dropping the coin on the Quest T62U. 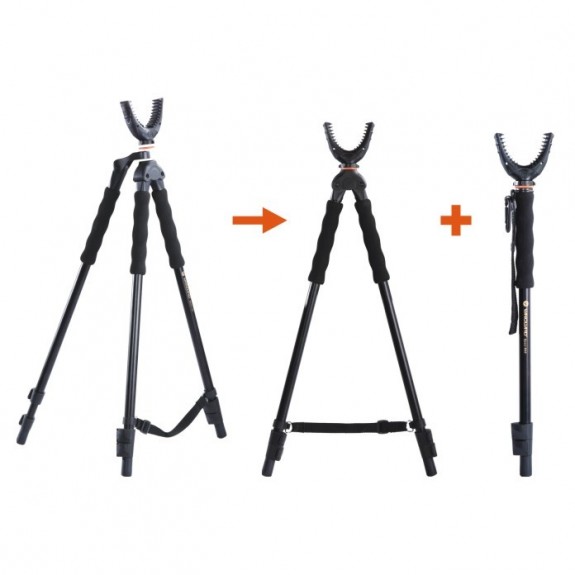 The ranges that I shoot on are generally informal, meaning there are no shooting bays, shooting tables, or concrete walkways. Any infrastructure I need must be carried in. Just this afternoon I zeroed a rifle with 18″ of snow on the ground without having to lay down in the snow. It was the T62U that made that possible by letting me get very stable in a standing, kneeling, sitting, or crouching position.

I have used both the bipod/gunpod configuration and the monopod configuration but I generally use it as a tripod because that is the most stable. I can setup the tripod so a single leg projects forward, away from me, and then load into it with my rifle. That, coupled with a tight sling, allows me to get stable enough to put a solid zero on a rifle without having to wallow around in the snow.

The Quest T62U has held up well to about a week left outside leaning against a tree in the rain and snow during deer season. The legs adjust quickly, easily, and mostly silently. Once they are adjusted, they hold their adjustments even when you are loading into the tripod. The bipod and monopod configurations work well and don’t feel like an afterthought. It is lightweight and seems to be rugged enough for what my purposes. This has been an extremely useful addition to my range kit.

Shop around a bit if you are looking for one. I paid significantly less than MSRP.

I should also mention that Vanguard makes a product called the UNI-STICK that I am considering purchasing for use with the Quest T62U. It attaches to the lead leg and turns the tripod into a more formal but still easily packable rifle rest.