June 3, 2019 – SOB Tactical is proud to announce the latest addition to the B-sling line up, the new MFQD. The MFQD, (Movement Free Quick Detach) swivel solves the problem of excessive movement common to nearly all QD swivels on the market. The MFQD Swivel is available now at SOBTactical.com.

When QD swivels were first repurposed from the sporting market to the tactical world, they retained the “swivel” loop attachment commonly used on rifles for the last 100 years. This movable bail swings like a bucket handle, and has been prone to failure under load and heavy use. If the movable bail loop fails, the release button will eject and will lose its ball bearings rendering the entire QD is useless. Shrek has seen this failure occur numerous times, and has separated the working systems to insure less failures by making it an unbreakable one piece.  Additionally, when slinging a carbine to go hands-free and releasing positive control of the weapon, the weight and position of the weapon shifts and sags with the legacy design. This unwanted movement is greatly reduced by the MFQD.

Constructed from Billet 7075 T6 Aluminum and Milspec Anodized, the MFQD features a single, solid body construction that follows the profile of the weapon. The unique triangular shape is rounded and streamlined to reduce snags, and sits low to the weapon wherever attached. Internally, the MFQD features tempered stainless steel bearings and release spring for longevity, reliability and corrosion resistance.

“Our new MFQD is specially designed for combat arms of all types,” said John “Shrek” Mcphee, owner of The Sheriff of Baghdad Tactical. “We developed the smartest solution to the movement challenge of every other QD swivel on the market.” Paired with the classic SOB Tactical B-sling, the new MFQD swivel creates a winning combo. McPhee has been developing B-slings for more then 20 years, each one with the gunfighter in mind. From Bosnia to Iraq and Afghanistan, the B-Sling has proven itself countless times on the battlefield.  “Our new B-sling with MFQD swivel is simple, practical and uses minimal materials to keep the weight and bulk down unlike the many ‘over engineered’ sling designs that have flooded the market in recent years,” continued McPhee.

Versatile enough for any rifle, it is extremely intuitive to use allowing quick adjustments with your non-firing hand using the lanyard release equipped buckle. With this design, the adjustment buckle remains in the exact same position regardless of how loose or tight the sling is, so you’ll never have to search for it or take your eye off target. Simply pull the free end near the lanyard towards your body to tighten. Grab the lanyard and push rifle to firing position to loosen and shoot. The MFQD B-sling employs “Quick to shoot” (Q2S™) technology as this is the most important function of any rifle sling in combat, to get the weapon back into the fight instantly from an administrative mode of carry.

The new MFQD is available now at sobtactical.com, in Black, Coyote, Ranger Green, Multicam and Multicam Black, with more colors coming soon. Each sling comes with a color matched combat band for sling stowage. For dealer and distributor inquiries, please contact sales@sobtactical.com All B-slings are made with pride in America with 100% Berry compliant materials, by Americans who are blind.

John McPhee/Shrek/Sheriff of Baghdad’s B-Sling is now available in a new QD version that features ALG Defense’s excellent and lightweight Forged Sling Swivel as the front attachment point. Like currently available versions of the B-Sling, the new FSS (QD) B-Sling is simple in construction, simple to use, and very functional. All slings ship with a SOB Combat Band. Check out the new FSS (QD) B-Sling at SOBManSwag.com. 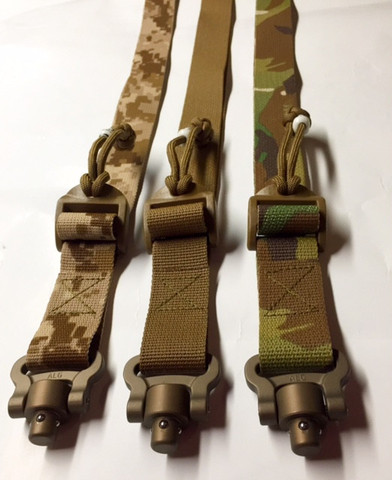