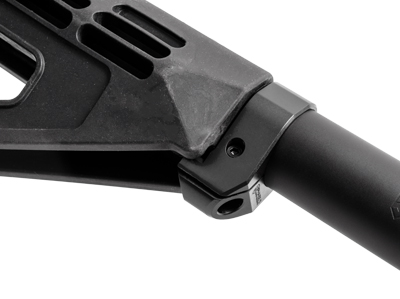 SB Tactical’s Stabilizing Braces have been nothing short of game changing. If you have one, you know that they can rotate slightly on the receiver extension during use unless they are butted up directly against the rear of the receiver. If you want to mount the brace further back, there wasn’t much you could do to keep the brace from rotating… until now.

Phase 5 is now offering a line of Brace Stops. They offer two models – the ABS-SB15 for the SB-15 Brace and the ABS-M which fits several different SB Tactical Stabilizing Braces. Both models clamp to your pistol buffer tube (receiver extension) and prevent both forward and rotational movement of the brace. They also provide a QD sling mounting point.

Check out the Phase 5 Arm Brace Stops at Phase5WSI.com.

Now you can put the void in your SB Tactical Brace to good use. SB Tactical has introduced a series of pouches designed to fit the arm channel of their braces. 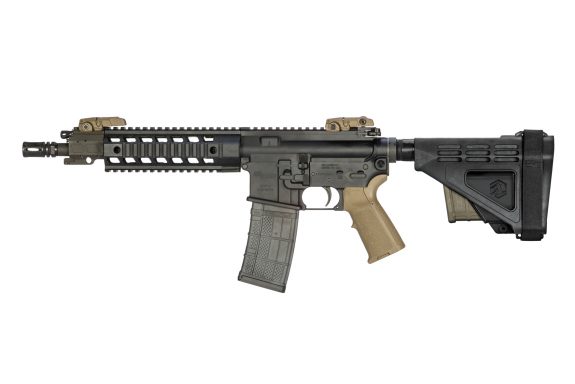 The SBMAG-20 is an injection molded polymer magazine carrier for 20 round AR-15 magazines that is designed to be anchored by the arm strap. It can hold a wide variety of 20 round AR-15 magazines including aluminum GI, Magpul PMAG, and Lancer L5AWM 20 round magazines (and likely others). SB Tactical states that the SBMAG-20 is designed for the SBM4™, SOB™, and SB15™ (SBX™ and SBX-K™ compatible with included 1″ replacement strap). 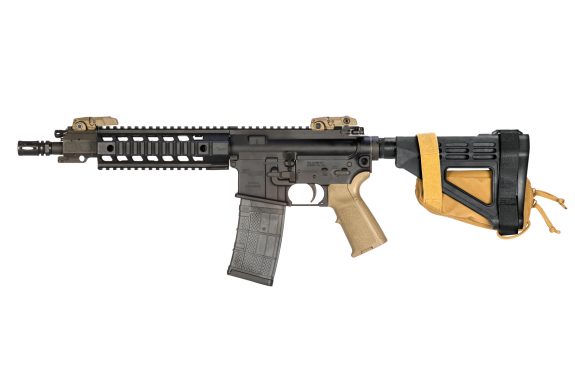 Grey Ghost Gear collaborated with SB Tactical to create the SB-SAC. The hypalon pouch may be mounted inside or on the outside of the brace. It is large enough to store a variety of items including a CAT tourniquet. The SB-SAC is available in black or FDE.

Check out the new line of pouches at SB-Tactical.com.

SB Tactical has announced a big win for their line of Pistol Stabilizing Braces. The ATF has reversed its earlier position that pistol with a brace is attached is “redesigned” into an NFA firearm if fired from the shoulder.

Saint Petersburg, Fla. (April, 25, 2017) – SB Tactical™, inventors and manufacturers of the Pistol Stabilizing Brace®, is excited to announce that the Bureau of Alcohol, Tobacco, Firearms, and Explosives (BATFE) has issued SB Tactical a reversal letter containing a sensible clarification of the Bureau’s position on the lawful use of SB Tactical braces.

The new clarification of opinion letter states, “an NFA firearm has not necessarily been made when the device is not reconfigured for use as a shoulder stock – even if the attached firearm happens to be fired from the shoulder. To the extent that the January 2015 Open Letter implied or has been construed to hold that incidental, sporadic, or situational “use” of an arm-brace (in its original approved configuration) equipped firearm from a firing position at or near the shoulder was sufficient to constitute “redesign,” such interpretations are incorrect and not consistent with ATF’s interpretation of the statute or the manner in which it has historically been enforced.”

SB Tactical, along with the law offices of Mark Barnes & Associates, have worked tirelessly for more than two years to correct what they believed to be an inaccurate interpretation of “redesign,” related to the Pistol Stabilizing Brace. “It has always been our belief that the addition of our Pistol Stabilizing Brace benefits shooters, both disabled and able-bodied, and that neither strapping it to your arm nor shouldering a brace equipped pistol would constitute ‘redesign’ of a pistol to a NFA firearm”, said Alex Bosco, inventor, founder and CEO of SB Tactical. “We are strongly encouraged by the ATF’s reversal of opinion and commend their willingness to continually review policy, including their own opinions, to ensure public safety and the fulfillment of their mission.”

Both SB Tactical and Mark Barnes & Associates are proud to be at the forefront of protecting and preserving the Second Amendment rights of law-abiding Americans. Mark Barnes echoed Bosco’s praise of the ATF’s new guidance and stated that “it’s clear that the Bureau has no intention or desire to prosecute law abiding citizens using SB Tactical Pistol Stabilizing Braces. Their decision to act should be commended.”

SB Tactical is now shipping their hotly anticipated SBPDW brace for AR-15 pistols. The SBPDW features a design that is reminiscent of a PDW style stocks and 3 position length adjustment – a feature that was previously hard to find on AR pistol braces. 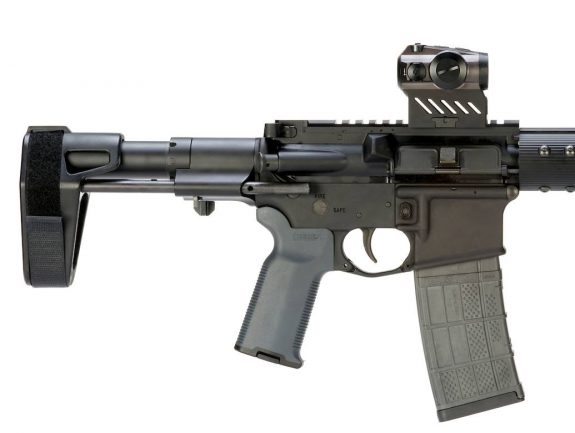 The SBPDW installs easily and uses standard carbine recoil springs and buffers. So, if you have an AR-15 that works great with a Sprinco spring and H3 buffer, you don’t have to change anything. Just swap your spring and buffer to the SBPDW and head to the range.

SB Tactical continues to innovate in the pistol brace space and the SBPDW is definitely fitting their mission of “improving the performance of the PDW Pistol”.

SB Tactical is now shipping a pair of folding pistol braces – the SBT5 and SBT5K – for the MP5, MP5K, and clones. These new braces are modeled after the Brügger and Thomet side folding stocks that are nearly as iconic as the MP5 itself and have integral folding mechanisms.

The SBT5 fits MP5/MP5K Reverse Stretch Clones. The SBT5K fits MP5K Clones. Both braces come with everything necessary for installation. 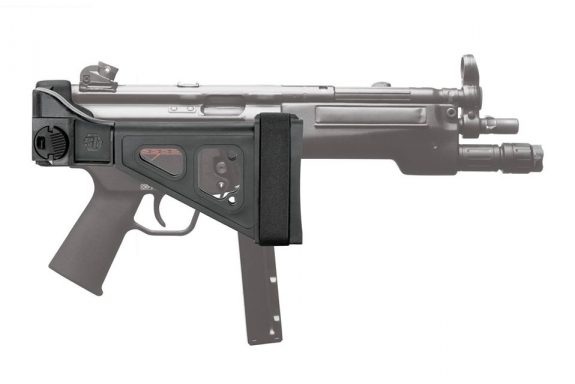 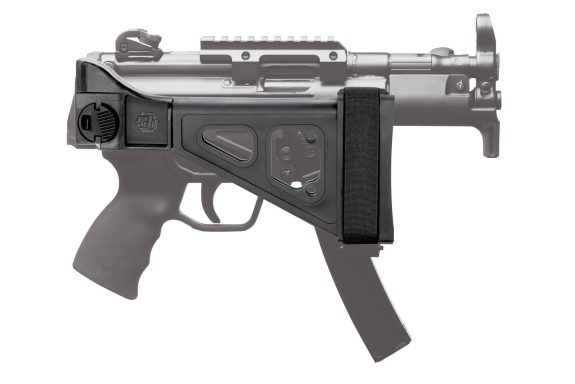